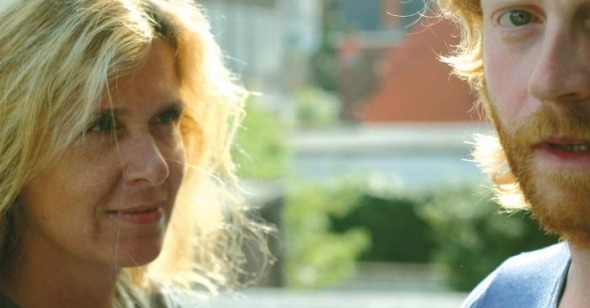 Lady and Ghent
by Leo Goldsmith

Charming comedies about unlikely romances ship out of Hollywood like genetically modified soybeans, so it seems a little unnecessary to import them here, as well. Besides, the joys‚ÄĒsincere or sarcastic‚ÄĒthat domestic rom-coms offer are largely based on a kind of fantasy celebrity matchmaking, a process of biochemical hybridization in which you pair, say, a Reese with a Vince, or a Hugh with a whoever. The challenge of importing a foreign romantic comedy is thus twofold: first, it has to compete with the appeal of the American star system; and second, it has to justify its genre-mandated frivolity in a corner of the market (‚Äúworld cinema‚ÄĚ) usually reserved for much more dour films.

Moscow, Belgium, a fleet-footed May-December comedy that won hearts at Cannes Critics‚Äô Week and the European Film Awards, may seem unnecessary (but then again, Belgium has defied the odds before‚ÄĒthis is the country that gave us Jean-Claude Van Damme when we least needed another hero). The film has no name-stars (Barbara Sarafian‚Äôs only big credit is Peter Greenaway‚Äôs 8 1/2 Women), a no name-director (most of director Christophe Van Rompaey‚Äôs prior credits are in Belgian TV), and a decidedly un-picturesque setting in the titular working-class Ghent neighborhood. But, damn it, the film is charming‚ÄĒand most likely this is due to its very lack of these and other qualities most commonly associated with Hollywood‚Äôs iterations of the genre.

To be sure, Van Rompaey‚Äôs film has its conventions. There is the meet-cute, in which 41-year-old Matty, an abandoned and rather worn-out mother of three, backs her four-door into a massive yellow semi piloted by 29-year-old Johnny, who looks a bit like a cuddlier and more Belgian Chris Elliott. (The original Flemish title of Moscow, Belgium translates to something like ‚ÄúCollision in Moscow,‚ÄĚ which would probably sound like an entirely different type of genre film over here.) Of course, as these things go, the meet-cute generates an exchange of abuse‚ÄĒhe calls her out on her age, she on his fragile sense of masculinity‚ÄĒthat later softens into cordiality. He offers to fix her damaged trunk, she offers him a dinner of blood sausage, and before long they wind up in the backseat of Johnny‚Äôs big-rig.

Naturally, this set-up is not without its complications: Johnny has a criminal past (predictable, but a touch nastier than you might expect), and Matty is still married. In many ways, though emboldened by Johnny‚Äôs often ludicrous ardor, Matty would really just prefer that Werner, her damp-looking art-teacher husband, leave his 22-year-old girlfriend and come back home to the family flat. ‚ÄúI want a peaceful life,‚ÄĚ Matty explains to preposterously romantic Johnny midway through the film. ‚ÄúI want my life to be like it used to be.‚ÄĚ And in the meantime, with fickle suitors piling up, Matty still has to raise three children (an amusing and not overdone spectrum of early-to-late adolescent problems), do the washing, and fry the sausages.

As Matty, Sarafian holds Moscow, Belgium‚Äės center of gravity, credibly conveying Matty‚Äôs changing sense of her own age and femininity with a welcome preference for wit over bathos. This is, after all, a romantic comedy, and though there are dark patches of something resembling realism, a gritty setting, and a matter-of-fact heroine, the film remains jaunty, with Tuur Florizoone‚Äôs accordion-heavy score echoing Johnny‚Äôs affable buffoonery (Jurgen Delnaet is relentlessly winning, with a smile that seems directly connected to his eyebrows). There aren‚Äôt many surprises‚ÄĒthe characters end up more or less where we expect them to‚ÄĒbut it‚Äôs useless and not at all fun to deny the simple pleasures of this film, trivial though they may be. I‚Äôll save my spleen for the inevitable Hollywood remake, and I‚Äôm taking bets on whom they‚Äôll cast.