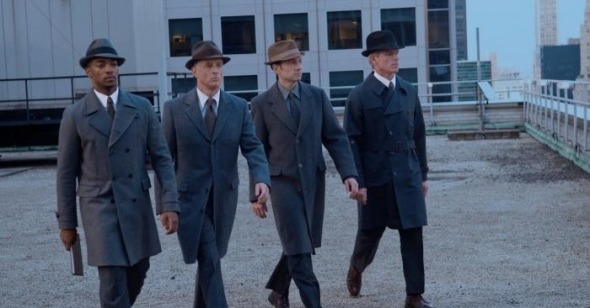 The Studio Chairman has a plan for you, MichaelтАФand itтАЩs written on interactive graph paper in a cheap black notebook toted by fedora-wearing angels, also known as flacks. (тАЬWeтАЩve been called that before.тАЭ) Be careful of inflection points, though, when you wander off-message. And if you plan to flex your critical free will in writing about this sweetly unconventional romance, rather than follow the PR script about how тАЬgrown-upтАЭ and тАЬsophisticatedтАЭ The Adjustment Bureau is (with that all-important caveat for a big-studio picture), watch out for ripple effects! IтАЩve nothing against love-at-first-sight stories, really, or watching the button-cute, vaguely porcine Matt Damon (as young senatorial contender David Norris) run like a Butterball turkey on crank from yet another retinue of shadowy agents, or peering at English pixie Emily BluntтАЩs lovely bone-in cleavage, but in trying to mash up every cinematic genre from Bulworth-esque political farce (DamonтАЩs concession speech to his opponent embodies the undying fantasy of authenticity in HollywoodтАЩs treatment of American politics) to Jason Bourne suspense thriller to brainy sci-fi fantasy, screenwriter-turned-director George Nolfi (OceanтАЩs Twelve, The Bourne Ultimatum) reduces his multidimensional passion play to a silly, slightly autistic finger painting. I wonder how this one was pitched to the execs at Universal . . . Okay, guys, itтАЩs The Truman Show meets Sliding Doors!

But such endless shape shifting is not the real problem with TAB, which amid all the fanciful chance-taking (celestial G-men, enchanted doors) asks to be taken seriously as a meditation on the ancient problem of fate and free will. Too many Hollywood movies тАЬloosely adaptedтАЭ from Philip K. Dick stories (whether credited or not; Truman writer Andrew NiccolтАЩs shameless swiping of Time Out of Joint comes to mind) water down the wigged-out, schizo futuristтАЩs most radical ideas, which were concerned above all with the mind-bending horrors of authoritarian control. Here, the agents in question forcing Norris and his beloved dancer from blissful union because it does not adhere to тАЬthe PlanтАЭ are Mad MenтАЩs John Slattery (whose Richardson could body swap with Roger Sterling and never hit a skeptic) and king-of-cold-hearted-villains Terence Stamp (here nicknamed тАЬThe HammerтАЭ for his ability to crush officially off-limits romances), but itтАЩs all played for yuks. What really hurts is the feeble attempt to universalize the Dickian тАЬconspiracyтАЭ of predestination in utterly harmless, blandly unitarian religious terms; hence, God is тАЬthe Chairman,тАЭ his on-the-ground agents are тАЬcase officers,тАЭ and the men who research and implement his master plan (apparently, female seraphim are barred from service in this corporate facsimile of heaven) toil in a facility that looks, well, just like the New York Public LibraryтАЩs Rose Reading Room. Touting a dubious version of world history to boot (тАЬWe took you from hunting and gathering to the heights of Rome. Then we gave you free will, and you gave us five centuries of the Dark AgesтАЭ), the film mounts a high-school-age-friendly case for self-determination, aiming to please general audiences who have vague ideas about love and life, the mysteries of chance and afterlife. In other words (worlds?), it all runs according to plan. тАФDS

At the climax of The Adjustment BureauтАФwhich occurs, like all good angling-for-dystopic Hollywood products, with its heroic characters on an unreasonably altitudinous rooftop surrounded by a vast cityscape meant to represent hope, progress, and dehumanization all at onceтАФAnthony MackieтАЩs possibly inept guardian angel-cum-bible salesman refers to the Chairman, the filmтАЩs unsubtly defined God figure, as тАЬhe . . . or she.тАЭ The second pronoun is sputtered out quickly, an ass-covering afterthought that seemed to me like a last-minute addition some fed-up script supervisor yelled out on-set. The concession might feel too-little-too-late for The Adjustment Bureau, whichтАФas you point out, DamonтАФenvisions a world behind our world populated by divine fate-controlling overseers who all have fedoras and penises (I presume the latter, since for all we know when they unzip the flies on their Beau Brummels a beam of light blasts out, but these are definitely menтАЩs men, one and all). Perhaps this wouldnтАЩt seem so egregiously sexist if the filmтАЩs flimsy plot werenтАЩt based entirely around whether or not the guy gets the girl.

In essence, despite its barrage of anything-for-Matt-Damon political cameos from Bloomberg to Jesse Jackson to Madeleine Albright and the fact that it was based on a Philip K. Dick story, Bureau is plainly little more than romantic comedy, in which fate literally tugs at our central pair of lovers from initial meet-cute to final foot-chaseтАФwhen Matt Damon and Emily Blunt enact to the letter what Roger Ebert calls the тАЬme push/pull youтАЭ sequence, in which our hardy hero must handhold our baffled babe through some intense action gauntlet (outrunning fate is now more prevalent than outrunning a fireball in Hollywood, it would seem). And since he has saved her last-minute, Graduate-style, from her own wedding, sheтАЩs rather dolled up in a black evening gown (virginal white would be too pure for this cheeky gal) as sheтАЩs yanked through a netherworld New York. The Adjustment Bureau posits that our destinies are written in tattered, digitally lo-fi notebooks of life (better than WantedтАЩs clunky, nonmobile тАЬloom of fate,тАЭ I guess), but women, who apparently are trying to get their dancing careers off the ground while their future husbands are out saving the world (from nuclear destruction?), must merit only a sidebar. Some may take most exception with the filmтАЩs gentle ending, which sharply underlines HollywoodтАЩs cautious relationship with totalitarian fantasiesтАФin which no expense is spared to evoke a frightening future world only so that something like love or human determination can conquer all. But if we are to look at the film as less Matrix than Sleepless in Seattle, complete with windswept rooftop climax, then it couldnтАЩt have ended either way, Dick be darned. тАФMK