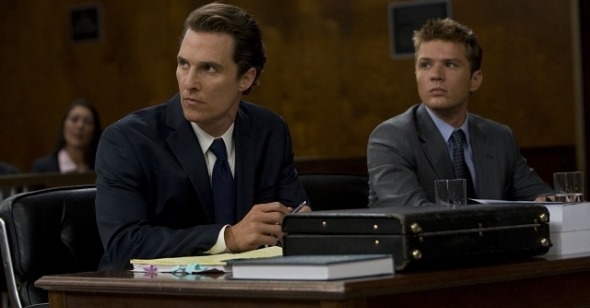 Every Monday, two Reverse Shotters wipe the weekend from their bleary eyes and engage in a postmortem on the multiplex trash (good or bad) they took in.

Back in his next-big-thing days, Matthew McConaughey was compared to Paul Newman, so it makes sense that he eventually got to do his version of The Verdict. As the title character in The Lincoln Lawyer (adapted, I would wager faithfully, from a novel by page-churner Michael Connelly), the former Wooderson gets to do the tarnished legal-eagle shtick beloved of aging matinee-idol types (not only Newman, but also Richard Gere, at least twice). McConaughey's Mick Haller ticks every box in the bent-not-crooked-attorney questionnaire: he drinks, he's divorced (but still hooks up with his ex, played by Marisa Tomei), professionally suspect (he gladly defends guilty clients when the price is right), and, as it turns out, is bobbing and weaving his way to a rude ethical awakening.

It's good casting insofar as McConaughey's one discernible talent beyond the maintenance of his abdominal muscles is a certain drawly insouciance—just right for a character who fancies himself (and to some extent is) a smooth operator. Unfortunately, director Brad Furman doesn't quite trust his star to put the type across, so he forces the issue with soundtrack bass-and-braggadocio and an observation by the film's lone black character (Laurence Mason) that our boy "would have done alright on the streets."

It's a benediction which assures us that there's no way that Mick is going to get outsmarted by the lily-white trust-fund douche bag (Ryan Philippe) he's taken on as a client. So there's no real suspense in The Lincoln Lawyer, just an awful lot of plot: this is the sort of movie where an accused date-rapist turns out to be not only a serial sex offender but an icy sociopath with blood on his hands—and a secret link to his new lawyer. The only real fun comes out of the scenes between McConaughey and Josh Lucas as his overmatched courtroom opponent, and not because they're well-written: it's in the way that one slightly more successful golf-pro-looking actor regards another with a half-amused, half-wary look that whispers "There, but for the Grace of God, go I." —AN

It hadn't occurred to me that there's no real suspense in this movie following a few early revelations, but you're right, Adam. And I felt a little embarrassed for the talky Lincoln Lawyer when it resorted to some precisely timed live rounds to awaken snoozing viewers. At that point, the guy in front of me shouted "This finally got good!", but like his perpetually laughing, gasping date, and seemingly most of the other attendees, I was having fun the whole way through. Credit for that goes to McConaughey, already fluent in legalese after Amistad and celluloid desecrator Joel Schumacher's A Time to Kill, for which I consider The Lincoln Lawyer adequate corrective. I've never read any of Connelly's Mickey Haller novels, but Matthew seems to nail it, running the gamut from cocky, chauffeured prick all the way to bleary-eyed, loosened-tie moral downward spiraling. Outside of the aforementioned Wooderson, I've never liked McConaughey, but when he suppresses all but his most obvious traits in the service of propulsive genre junk like this, he's rousing. I liked Denzel Washington in the pulper Out of Time for the same reason.

I haven't read any reviews, but I assume some have compared The Lincoln Lawyer to a meatier episode of L.A. Law or the like. It has the same oversaturation and random, unnecessary zooms as CSI: Miami, and there aren't any profound life lessons here because it's a "motion picture," but I think we're past the point, and have seen enough great television come and go, when comparing a film to a TV show is an automatic put down. The longer running time allows for some semi-fleshed-out, amusing character work from William H. Macy as Mickey's wittily enthusiastic information gatherer, and Boardwalk Empire's Shea Whigham as a wisecracking fink. I'm still not sure what John Leguizamo's character was there for, and I regret having to hear him deliver the movie's worst line: "You've got more balls than a Chinese ping-pong tournament." Google image search results suggest that Furman is a model-dating Good Charlotte fan, but the work's what matters, and The Lincoln Lawyer has me not dreading the follow-up. —JS