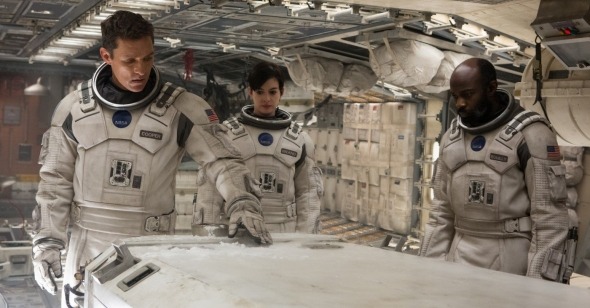 Christopher Nolan usually makes movies about characters who are prisoners of their own devices, which makes Interstellar a departure. This time out, a protagonist‚Äôs single-minded obsession leads him to liberation rather than entrapment. A film of wide-open spaces and lofty ambition‚ÄĒand fields of corn literally as high as an elephant‚Äôs eye if you‚Äôre watching it in IMAX‚ÄĒInterstellar is Nolan‚Äôs most enjoyable film since 2006‚Äôs The Prestige and in many ways his least enervating movie ever, drained as it is of the acidic pessimism that infected so many of its predecessors. Leaving aside the cynical and ideologically incoherent Dark Knight trilogy, Nolan‚Äôs most notable features, Memento and Inception were painstakingly gray-scale in look and theme; as photographed by the very gifted Swiss cinematographer Hoyte van Hoytema but also as written by the director and his brother Jonathan, Interstellar has a richer palette.

The film‚Äôs surprising warmth also derives from the casting of Matthew McConaughey. His character, Cooper, is a former NASA test pilot, and McConaughey has an ex-flyboy‚Äôs lean, springy agility (and a Chuck Yeager drawl to boot). But Cooper is also supposedly a brilliant engineer, and McConaughey, who has never been mistaken for a cerebral actor‚ÄĒeven by his supporters‚ÄĒsuccessfully projects that sort of intelligence, not by showing it off but by holding it in behind a crafty grin. Where previous Nolan stars like Christian Bale and Leonardo DiCaprio made a show of how hard they were working at all times, McConaughey has a natural ease that that mitigates even his character‚Äôs steelier moments.

There are, of course, plenty of moments: McConaughey may be a relaxed actor, but Insterstellar is an anxious movie, and increasingly so as it goes along. That sense of urgency is bound up in the basic premise, which is that at some unspecified time in the future‚ÄĒafter massive social and environmental upheavals, but not so far away that pickup trucks have gone out of style‚ÄĒthe Earth‚Äôs crops have been ravaged by perpetual blight, and its inhabitants‚Äô aspirations have withered along with them. Arriving at the local schoolhouse for a PTA meeting, Cooper is informed by the principal that his teenaged son, Tom (Timoth√©e Chalamet), needs to embrace his destiny as a farmer instead of his dreams of higher education, and that his twelve-year-old daughter, Murph (Mackenzie Foy), has been acting out by showing her classmates old textbooks about the Apollo 11 mission: the moon landing has been recast by historians as an act of American propaganda designed to bankrupt the Soviet Union (maybe Room 237 has finally made it into the academic curriculum).

The Nolans‚Äô jones for exposition arguably gets the better of them in these early sections, which frame humanity‚Äôs near future as a mirror of its recent past‚ÄĒAmerica returned to its Dust Bowl heritage. Their vision of a dispersed and desperately agrarian, technophobic society is more convincing to look at then to think about. It turns out that the brainiacs at an officially disbanded NASA have been working away steadily in the shadows to find a solution to the problem (don‚Äôt call it a comeback, they‚Äôve been here for years), and it initially strains credibility that the NASA project‚Äôs overseer, Professor Brand (the inevitable Michael Caine) would, along with his daughter, Amelia (the incessant Anne Hathaway), would recruit Cooper to immediately blast off in one of their massive shuttles to help seek out planets capable of sustaining life. But there are enough clues planted in the screenplay‚ÄĒespecially the scenes detailing how Cooper and Murph end up finding the hidden scientists in the first place‚ÄĒthat the sense of haphazard randomness is ultimately replaced by one of inexorability.

This predictability is of course a byproduct of the director‚Äôs particular brand of puzzle-box narrative; ever since Jeremy Theobald‚Äôs cool cat got killed by his own curiosity at the end of his debut, Following, Nolan has earned‚ÄĒand actively cultivated‚ÄĒa reputation as a guy with a trick up his sleeve. That yen for deception found its best expression in The Prestige, which could write off most of its ridiculous grandiloquence to the fact that it was about stage magicians, and was so superbly edited by Lee Smith that any rips in its intricate narrative latticework felt sutured securely shut. For a good long while‚ÄĒbasically until the middle stages of Cooper‚Äôs deep space mission, which is conservatively estimated for a duration of two years and includes Amelia and a refreshingly non-motley crew of egghead humans (David Gyasi and Wes Bentley) and a wry artificial intelligence unit (voiced by Bill Irwin)‚ÄĒInterstellar is perfectly linear in its storytelling, albeit at a notably stop-start pace that‚Äôs meant to evoke the slippage of time. In accordance with Einstein‚Äôs writings, time flies when you‚Äôre on the other side of a black hole‚ÄĒand evidently, it really drags when you‚Äôre having long conversations about the theory of relativity.

This is something that Stanley Kubrick understood when he turned HAL 9000 into 2001‚Äôs sole orator: Douglas Rain‚Äôs droning cadences were like a parody of the explainer-scientist characters in so many rocket-ship-to-the-moon movies before him. As virtually every other critic has already pointed out, Interstellar nods explicitly to 2001, but in ways that run deeper than mere citation or allusion; if one accepts the idea that, say, Brian De Palma isn‚Äôt ‚Äúripping off‚ÄĚ Hitchcock in his films so much as acknowledging that it‚Äôs virtually impossible to make an erotic/psychological thriller without invoking him, then Nolan might deserve a similar benefit of the doubt. For instance, the device of Cooper transmitting anguished messages back to his family at intervals that register as months to him and years to them at once evokes and re-codes the daddy-daughter dialogue in Kubrick‚Äôs film. In 2001, the scene was meant as a kiss-off to earthly concerns, for character and filmmaker both; here, it suggests that the home front is always on the adventurer‚Äôs mind (a theme as old as the original Odyssey). And then there‚Äôs the way that Nolan eventually restages Kubrick‚Äôs ending, particularly the motif of self-recognition, which switches here from a man (and Man) bearing witness to his own accelerated senescence and death to a memory play where he is forced to watch himself make a fateful decision‚ÄĒwith the added twist that he can also reach out and do something about it.

Reviewing 2001 in 1968, Pauline Kael carped out what she saw as its underlying endorsement of passivity: ‚ÄúThere‚Äôs intelligence out there in space controlling your destiny from ape to angel, so just follow the slab. Drop up.‚ÄĚ The question of whether 2001 critiques or enshrines our fetishes for higher technologies and/or a higher power remains eternally open‚ÄĒjust the way that Kubrick left it‚ÄĒbut Interstellar is unambiguous; its revelations, which it telegraphs well in advance, assert the primacy of human beings‚ÄĒboth to get themselves into trouble and then to get themselves out of it. The other obvious patron saint of Interstellar is Steven Spielberg‚ÄĒstereotypically the good angel to Kubrick‚Äôs smirking devil and the original director for the project back when it was the brainchild of physicist Kip Thorne‚ÄĒexcept that Nolan doesn‚Äôt share the older man‚Äôs fascination for the fantastic. Smarter minds than mine will weigh in on the relative fictitiousness of Interstellar‚Äôs science fiction, but this is still the same filmmaker who, in The Prestige, dragged in Nikola Tesla to establish plausible context for a movie about magic and who reduced the subconscious to a blueprint in Inception. Without going too deeply into the plot details‚ÄĒand there is plenty of narrative action that I haven‚Äôt touched on, including a long stretch in the company of an unbilled actor whose character‚Äôs surname indicates that he‚Äôs probably not to be trusted‚ÄĒit can be said that Interstellar is not merely an agnostic blockbuster, but an actively atheistic one‚ÄĒits mysteries are internal, projected outwards onto the universe, rather than the other way around.

There‚Äôs surely arrogance in this position, but also a surprising degree of humility. What‚Äôs affecting about Interstellar is its dramatic motif of choice, which is consistently exercised by its characters, and not always smartly or nobly. Somewhat surprisingly for a filmmaker who usually keeps morally decisive twists in his back pocket like sticks of chewing gum (you never want to suddenly run out) it never feels like the characters are being exalted for their successes nor unduly punished for their hubris. The philosophical rhetoric does get pretty windy at times, and it takes a certain species of high-minded, serious-commercial entertainer to conceive a story where the stakes are so stratospheric‚ÄĒpeople talk about saving the world so regularly that it sounds like the between-set banter at a Live Aid benefit. But it also takes a lot of talent to make said material work even halfway, especially across a three-hour running time, and if Nolan‚Äôs godhead status in some corners of film culture shouldn‚Äôt insulate him from criticism when his films are weak, nor should his reputation as a well-coiffed fraud among the cinephile set obviate his accomplishments here. Interstellar has the sort of grandly scaled visuals that indicate true compositional sense rather than mere CGI processing power, and if the cross-cutting through space and time is dodgier than in Inception, there‚Äôs more going on inside the shape-shifting aspect ratio frames.

Interstellar has an overbearing score, by Hans Zimmer, and a cluttered sound design that makes every actor sound at least once or twice like Tom Hardy as Bane (in space, nobody can hear you enunciate properly). It overestimates Hathaway‚Äôs crumpled face as a site of rapt contemplation. It features its fair share of technobabble, accompanied by the requisite Star Trek-ish analogies to make it comprehensible to lay-viewers (i.e. a wormhole explained by punching a hole in a folded piece of paper). Its half-earthbound back half, which features famous grown-up actors as Cooper‚Äôs now-adult children, is dramaturgically turgid. Its conflation of astrophysics and metaphysics is often awkward. It‚Äôs earnest in ways that invite and can only partially withstand scorn. It‚Äôs almost entirely humorless. It‚Äôs ardent about the anxiety and responsibilities of parenthood in a way that marks it as the work of a fortysomething father of four who has traded in the closed infernal loops of his youth for some wider, and perhaps loopier, trajectories tracing paths of peace and reconciliation. It doesn‚Äôt quite stick the landing. But it gets there in one piece.