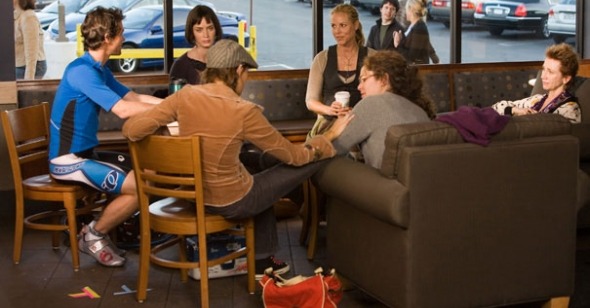 Women in Love
by Emily Condon

Films fail for all kinds of reasons‚Äîthey‚Äôre shot poorly, the CG looks shoddy, the romantic leads can‚Äôt generate chemistry. Self-sabotage, however, isn‚Äôt commonly blamed. But to the extent that Robin Swicord‚Äôs The Jane Austen Book Club falls short, it‚Äôs hard not to wonder whether that could be the culprit. Of course, it‚Äôs wildly presumptuous to suggest that Swicord‚Äôs culpability is in any way intentional (consciously or not), but the film‚Äôs most significant failings are so alike, and so avoidable, that it‚Äôs a tempting proposition. I should offer one qualifier here: I haven‚Äôt read the Karen Joy Fowler book from which the film is adapted. Yet the problems elucidated below are of such a distinctly cinematic nature that I feel confident in laying them at the film‚Äôs doorstep.

Throughout The Jane Austen Book Club, a clear, if bewildering blueprint emerges. It goes something like this: an emotional arc starts to swell, the action nears climax, and then just before it gets there, the camera cuts to something whimsical or silly. Repeatedly executing this pattern, Swicord (who wrote and directed) undercuts nearly every scene that has the potential to resonate deeply just before the moment where catharsis would (i.e. could) occur. In this sense, it recalls the TV show Law & Order‚Äîbut that show‚Äôs frequent cuts to intertitles (accompanied by those two now famous notes) just before the emotions peak, one could argue, transfer the power of what‚Äôs onscreen into the viewer‚Äôs imagination. The Jane Austen Book Club, in contrast, doesn‚Äôt exactly interrupt the cruxes of its most powerful sequences‚Äîrather it just diverts attention away by cutting to a gag. While this technique suggests a stab at ‚Äúlightness,‚Äù it results in a sensation that‚Äôs closer to ‚Äúlite.‚Äù The characters are all likable, thanks largely to the actors‚Äô vivacious performances, but our interest flags as the picture repeatedly demonstrates its lack of concern or comfort with delving beneath their surfaces.

As the narrative begins, we find a small assembly, comprised of a few of our protagonists and a handful of others, clad in black and clustered around an open grave. A clergyman offers a funereal tribute, and lovely Jocelyn (Maria Bello) borders on hysteria. We get a closer look at the rest of the mourners, who look somewhat less bereaved. The camera then slowly pans right to expose an ornately framed portrait of the deceased‚Ä¶who happens to be a Rhodesian Ridgeback. Which is a fancy way of saying a dog. The only thing missing is the rim shot.

After the funeral, we‚Äôre introduced to a number of Jocelyn‚Äôs friends, who weren‚Äôt mourning Jocelyn‚Äôs dog Pridey so much as showing their support. Sylvia (Amy Brenneman), who‚Äôs on the kinder cusp of middle age, enjoys a comfortable if not especially electrifying marriage to Daniel (Jimmy Smits); Allegra (Maggie Grace) is their pretty, high-spirited, lesbian daughter; and Bernadette (Kathy Baker) is one of those closer-to-the-other-end-of-middle-aged women whose funky glasses/bad haircut brand of wackiness manages to charm despite its contrivance.

At dinner one night shortly after the service, Daniel announces to Sylvia that the flame at the core of their marriage has dissipated. Furthermore, he explains, because he‚Äôs a man who needs passion, he‚Äôs been seeing another woman. Sylvia‚Äôs anger at his digression is trumped only by her surprise. Over the course of one dinner, her entire life as she knows it has collapsed. In an effort to alleviate her woes, Jocelyn, Bernadette, and Allegra rally to her side, cooking up a book club in which they‚Äôll only read Jane Austen novels over the course of the next six months. Also joining are a couple of companions they pick up along the way, namely Prudie (Emily Blunt), an uptight French teacher with a Louise Brooks haircut and a barely concealed ache, and Grigg (Hugh Dancy), an eager sci-fi geek willing to trade light sabers for literature in an attempt to woo the obstinate Jocelyn.

At this juncture, the film has been breezily charming and humble, if not exceptional. The actresses, though uniformly attractive, appear refreshingly unpolished. Brenneman injects Sylvia with a sorrowful resilience that‚Äôs hard to resist; Bello once again proves lovely; Dancy is charming; and even broader portraits, like Baker‚Äôs, feel truly lived-in. The NoCal aesthetic furnishes a subtle commentary about the corporate conventionality of contemporary American life. Contrary to the fertile settings they read about in Austen, their prefab environs‚Äîfrom Starbucks to SUVs to monolithic exurban developments to malfunctioning parking meters‚Äîcement their confinement, rather than alleviate it. We start to settle in.

Then comes another canine cutaway. This one‚Äôs the cinematic equivalent of one of those wink/nod/nudge combos. Grigg and Jocelyn are sparring over their differing interpretations of Austen. Their exchange accumulates considerable sexual tension. Then, just as the teakettle is about to whistle, so to speak, the camera cuts from their heated spat to a reaction shot...of a dog making a funny face. Ba dum bum.

Other such egregious moments are strewn throughout. Nearly every time the viewer is tempted to invest in a scene, an abrupt tonal turnabout occurs. Another example: the kinetic sexual energy between Jocelyn and Grigg has been building over the course of the whole film. However, the moment they finally begin to consummate their relationship, the camera drifts away from their bodies, coming to rest on a toy robot. The scene‚Äôs charge instantly evaporates. Then there‚Äôs Prudie‚Äôs plotline, which may boast the most blatant dalliance into superficial whimsy. The confines of Prudie‚Äôs unhappy marriage have brought her to the brink, which in her case consists of meeting a particularly lascivious high school boy in a motel parking lot. One lonely intersection separates her from her potential mister. She‚Äôs facing the point of no return, and if we care about the character and if the movie matters, in any larger sense, it‚Äôs an intense moment. Just as she‚Äôs about to cross, the camera cuts to the traffic light. The signal‚Äôs large, blinking letters emblazon the words ‚ÄúWHAT WOULD JANE DO?‚Äù across the frame. Possible profundity has yielded to prank yet again.

The Austen book that plays the most essential role in the film is Persuasion. Two of the film‚Äôs central reunions hinge on readings of this, her final novel and arguably her masterpiece. Harold Bloom once captured something essential about Austen‚Äôs achievement when he suggested that, despite its traditionally happy ending, Persuasion always leaves the reader with a palpable sense of sadness. Such sadness, he suggests, emerges from the novel‚Äôs overall ‚Äúsomberness.‚Äù That quality, which runs throughout all of Austen‚Äôs books, is what so many of the myriad modern interpretations of Austen sorely lack, and The Jane Austen Book Club is no exception.

Furthermore, if the trivial ‚ÄúWhat Would Jane Do?‚Äù tactic is turned back to its source, we grow even more baffled. Even casual Austen fans know that letters often play prominent roles in her narratives, most remarkably in Persuasion. (Even those who don‚Äôt know are told over the course of this film). Two letters figure into The Jane Austen Book Club‚Äôs story: the first is from a publisher to Allegra‚Äôs girlfriend that reveals that the latter has been passing off Allegra‚Äôs stories as her own. It‚Äôs not unimportant to the larger plot, but it‚Äôs not particularly essential, either. Nevertheless, we hear it delivered, in its entirety, in a voice over by the publisher (a character whom we otherwise do not encounter). The second letter comes somewhat later. Inspired by Persuasion and encouraged by Bernadette, Daniel writes a letter to Sylvia, assumedly proclaiming his love and pleading with her to take him back. Sylvia‚Äôs receipt of this letter is arguably the climax of the picture, but we hear nary a peep. What Jane would never, ever do is inexplicably gloss over the premier point of the narrative.

Despite its literary ambition, The Jane Austen Book Club isn‚Äôt, finally, that different from many of its mass-market sisters. It‚Äôs polished, pretty, and at least passably intelligent. But the film‚Äôs repeated unwillingness to confront complex, messy, and profound emotions, coupled with its hankering for easy resolutions, sabotages its potential significance. What could have been an appealing and insightful look at female self-identification in contemporary America instead becomes what Jane Austen‚Äôs heroines liked least of all‚Äîanother pretty face expecting, rather than earning, her happily ever after.