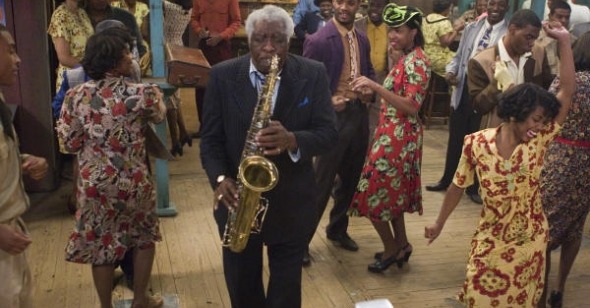 Bar None
By Leah Churner

In John Sayles's vision of small-town Alabama circa 1950, a young wanderer has to stop and ask, "Hey man, what side of the tracks am I on?" He isn't behaving preposterously; amidst the distressed wood and self-conscious metal junk blanketing the sets of Honeydripper, the boy really can't tell. Sayles's films are generally celebrated for their leavened characterizations and authentic grit; Honeydripper, produced with a much larger bankroll than his previous work, lends credence to the notion that independents need to hover around the poverty line to produce anything substantial. As a screenwriter, Sayles is famously heavy-handed in his exposes of “social issues,” but he gets away with it by crafting good dialogue. Talking is what it's all about; Brother from Another Planet, Lone Star, Casa de Los Babys, and Silver City are, in a sense, essay films. Sayles obviously envisions his audiences embarking on heated rap sessions after filing out of the art house, but the stiff rusticisms here are unlikely to inspire anything but snorts: "If dat ain't true den grits ain't groceries!" It's bad history on a bloated budget.

In the quaint town of Harmony, a retired honky-tonk piano-man answering to Pine Top (Danny Glover) is the current proprietor of the Honeydripper Lounge. The place is a money pit haunted by creditors of all shapes, and the patrons have moved caddy-corner to a new juke joint. Pine Top fires his regular blues singer and plugs in a jukebox, but only succeeds in blowing a fuse. He then advertises a big-name electric guitar act from New Orleans, but guitar Sam is a no-show. Meanwhile, a stranger with his own "axe" (a piece of slang the characters throw around quite a bit) wanders into town, but is captured by the sheriff on a loitering charge and cast into indentured servitude. Can Pine Top connect the dots and free the boy before booze o'clock on Saturday night? With the help of a sidewalk oracle—the "wise, old, black blues man" so recognizable from lived experience: blind, full of twang, riddles, and riffs—dreams inevitably come true.

Clocking at roughly two hours, Honeydripper drags us through high cotton, Christian burials, and tent revivals, stopping along the way to allow each citizen of Harmony to relate a back story. Recent America's Next Top Model runner-up Yaya DaCosta's character, China Doll, had pneumatic rheumatism when she was a wee one, and this explains why she weighs eighty pounds and walks at a ninety-degree angle. Still, a few performances deserve honorable mention: Lisa Gay Hamilton, as Pine Top's spiritually beleaguered wife Delilah, approaches this less-than perfect project with the full heft of her constitution, and Sean Patrick Thomas, a khaki-clad fugitive from Memphis, is an admirable smart-ass amid all the kitsch.

Honeydripper recycles plot points from the successful Lone Star, establishing "the only black bar in town" as a place of community controversy, providing a safety valve for day laborers and army recruits, but also functioning as an arena for violent conflict. Stacy Keach replaces Kris Kristofferson here as a sick, shit-kicking extortionist with a sheriff's badge who makes life hell for everybody. If a little hammy at times, Lone Star excels in historicizing border politics, tracing contemporary Mexican-American class structure from the estuaries of racial conflict in Texas' early statehood. Honeydripper has an interesting premise too. Sayles evidently tried to make a film about the history of instrumentation and amplification in American music. At its best moments, it lingers on cultural milestones: Pine Top wonders aloud about the first house slave who dared to touch a piano; the jukebox (literally) kills the local entertainer; a small Southern town sees its first electric guitar. More often than not, though, Honeydripper abandons the subject of music in favor of cracker-barrel proselytizing. Two lessons learned: everybody has a talent, and violence is not the answer.

It's certainly interesting to see how music-hero biopics like Walk the Line and Ray ooze with standalone cred, while generic period pieces have to dance a little fancier to compensate for not having a real dead name to bank on. Both Dreamgirls and Honeydripper become brand names in creative ways, casting reality television stars and professional musicians as actors. Honeydripper's marketing department is currently ushering its soundtrack musicians, dubbed the Honeydripper All Stars, from tent to tent on the festival circuit—check the listings of your local bluesapalooza. The music, pointedly retro with plenty of contemporary pop ladled over it, is engineered to have wide appeal, and now that the stagehands are back in showbiz, somebody should rescue these people from the Long Beach Blues Fest and adapt Honeydripper to the Broadway stage. Make it a musical, then readapt it for the screen. Here's hoping Queen Latifah and Beyoncé are in the remake.