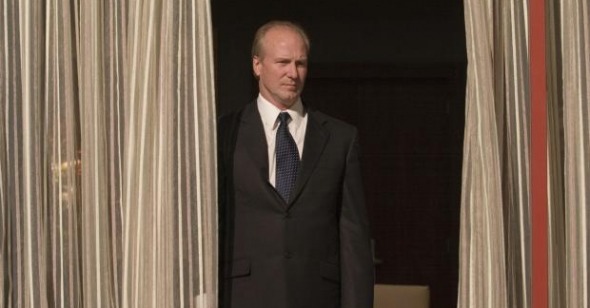 View from the Top Down
by Benjamin Mercer

At the beginning of Vantage Point—and, due to its nonlinear narrative structure, also at several points throughout it—President William Ashton (William Hurt) is poised to take the podium to announce a landmark anti-terror initiative, the culmination of a global summit in Salamanca, Spain. Here is America rebuilding its image in the world, slowly, one diplomatic gesture at a time. No hints are given in the film as to what this international agreement might consist of, but there is a general tone of progress in the plaza, despite the large, vocal crowd of equally unspecific anti-American protestors. President Ashton’s admirable policies, however, are all for naught. He is shot and killed, and a well-organized group of terrorists follow up the assassination with the detonation of two bombs nearby.

Vantage Point, written by Barry L. Levy and directed by Pete Travis, resets its clock six times, returning each time to noon—same day, same place—offering another person’s perspective of the assassination and subsequent blasts, each time revealing a new dimension of what really happened. I didn’t expect conceptual rigor, but Vantage Point eventually seems to lose interest in its own narrative strategy. Though the first few sections follow individual points-of-view rather closely, the subsequent passes stray carelessly from them. In the film’s final section, separate planes of action featuring various characters are chaotically cut together in poor imitation of the Bourne franchise freneticism. None of it has anything in particular to do with any single character’s perspective, or any immediate human perspective at all—for example, a crucial twist is revealed via a distinctly third-person omniscient flashback.

About halfway through the film, we are privileged to the president’s point of view as he is escorted to the plaza in a town car full of handlers. They pull the car over and inform the president of a credible assassination threat, and that they have arranged for a double to replace him onstage. The president reluctantly assents to this. It is on a television in a nearby hotel, then, that President Ashton sees his double fall down dead. The president looks somewhat shaken, but he still has his wits about him enough to reject the veritable pleas of his hawkish advisers, played by Bruce McGill and James LeGros, to authorize an immediate strike on an alleged terrorist training camp in Morocco. The president calmly reminds them that Morocco is a friendly Arab nation, and that attacking them would be a certain setback on the real progress made in Salamanca. He then implores them to relish the fact that being repeatedly targeted by terrorists does have its fringe benefits—America is, at least for the time being, basking in all the world’s sympathy.

Certainly having the compassion of other nations is a plus, but is the commander-in-chief really suggesting, and with a distinct whiff of nobility, that America’s finest hour is its hour of greatest victimhood? William Hurt has camped up many of his recent performances with strangely cadenced line readings (it got him an Oscar nomination for his few minutes of screen time in A History of Violence, so who can blame him?), a tendency he reins in here. His President Ashton is a more straightforward, sincere creation, and the film, politically evasive as most of it is, seems to identify with the convictions of its president. To generally allude to President Ashton’s favorable approval rating, the film places a grizzled Secret Service veteran (Dennis Quaid) in the Spanish plaza and clumsily casts him as a kind of archetypal American hero during the war on terror—visibly rattled, bravely persevering, and without vanity, returning to his first detail after he stepped in front of a bullet to successfully thwart the last attempt on the president’s life (how many have there been?). Also standing in for an approving American public in the crowd at Salamanca is a wide-eyed American tourist (Forest Whitaker), who, possessed by naïve wonderment and captivated by a general sense of history being made, eagerly captures everything around him on video. (At one point, Whitaker’s character runs to keep up with Secret Service agents chasing down a suspicious character in the streets of Salamanca, all so he can “help” them by capturing it all on video. Like Cloverfield and Diary of the Dead, Vantage Point trots out a character who treats his camera as an agent of history a great deal more important than his own safety, and, also like those recent films, seems to cynically reward that dubious prioritizing by making his footage a crucial piece of the film, if not its entirety.)

The president’s nostalgia for the candlelight vigils of 9/12, ostensibly shared by the Quaid and Whitaker characters, is especially troubling in the context of a film that treats the violent antecedents of such pacific, globalized condolence so flippantly. Of course, Vantage Point is pure fantasy, more concerned with churning out a satisfying resolution through narrative gimmickry than bearing out hows or whys. But as a mishmash of current political concerns, the film can’t help but seem exploitative; it frames acts of terror broadly as action mayhem, and even replays the most spectacular of its explosions from various angles. Last year, many critics leveled similar charges of misconduct against Peter Berg’s The Kingdom, which differs stylistically from Vantage Point but shares a basic narrative template with it: both follow U.S. law enforcement officials hunting down terrorists on foreign soil. But Vantage Point makes The Kingdom, which sought out some feeling of human consequence, however perfunctorily, look like a model of gravity and respect.