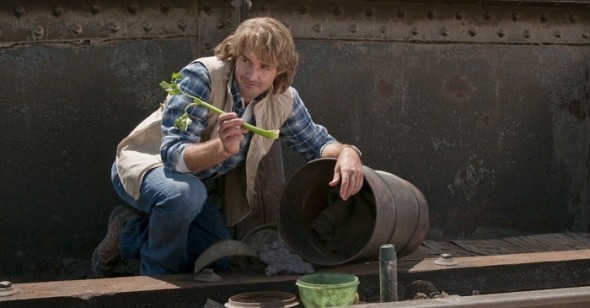 Balls to the Walls
By Adam Nayman

‚ÄúNever ever say never ever.‚ÄĚ This is one of the pearls of wisdom of the title character of MacGruber, a film adapted from a series of Saturday Night Live sketches which fans and detractors alike might have agreed would never ever make for a decent movie. Generally running no more than ninety seconds and as ritualistically structured as kabuki theatre (or ‚ÄúConeheads‚ÄĚ), the ‚ÄúMacGruber‚ÄĚ skits‚ÄĒwherein a mulleted Will Forte tries and fails to defuse a bomb in the company of Kristen Wiig and that week‚Äôs special guest host‚ÄĒepitomize the new house style at Saturday Night Live, and, accordingly, much of American film and television comedy in general: aggressively selling the joke while not-so tacitly acknowledging its basic stupidity. It‚Äôs balls-out frontality, but with the tail already neatly tucked between the legs.

In Jorma Taccone‚Äôs film adaptation, Forte tucks something else between his legs, or, to be more accurate, into his bum cheeks‚ÄĒa hunk of celery, transformed from mere fresh produce into a prop that allows MacGruber and his team (Wiig and special guest/career rehabilitating ex-star Ryan Phillippe) to get the drop on some gun-toting bad guys. On the one hand, the gag kids the conventions of MacGruber‚Äôs namesake and most explicit inspiration, MacGyver, whose hero was able to turn virtually any object or situation to his crime-fighting advantage (‚ÄúDon‚Äôt thank me: thank the moon‚Äôs gravitational pull‚ÄĚ). On the other, it‚Äôs simply an excuse for the star to make a literal ass of himself onscreen.

Either way, it‚Äôs pretty funny. What else is there to say, really, about MacGruber, other than to report that one vital, perhaps mildly surprising fact? In terms of ambition, the film rests near the low end of the contemporary Hollywood comic continuum, bereft of even the basic, boys-will-be-boys sociology of David Wain‚Äôs (great) Role Models, to say nothing of the pathos-mongering of Judd Apatow (whose logical next step, after the James L. Brooksian gambit of Funny People, would be to remake Ikiru with Seth Rogen). One possible analogue would be David Gordon Green‚Äôs Pineapple Express, with which Taccone‚Äôs film shares a regressive, almost unseemly desire to retreat into the womb of basic-cable staples, another occupant of an ever-narrowing North American nostalgia gap that drives Eighties babies to validate a spectacularly fallow cultural epoch by simply inventorying the crap that filled it (see also: the oeuvre of Seth MacFarlane).

Pineapple‚Äôs operations got tangled up in Green‚Äôs desire to have things both ways: to set a pair of idiot stoners loose in a vicious, unrepentantly violent trash-flick diegesis while loudly humping deeper, sweeter chords (borne out by Franco‚Äôs gentle but eventually tiring sheep-eyed naivet√©). Taccone, the Quiet Beatle of the musical-comedy collective Lonely Island (of ‚ÄúI‚Äôm on a Boat‚ÄĚ fame), has no such aspirations. And nor does he have the chops of Edgar Wright and Simon Pegg, whose Hot Fuzz is another potential analogue. That film‚Äôs affectionate appropriation of Nineties action movie tropes‚ÄĒincluding a reenactment of the ejaculatory money shot of Kathryn Bigelow‚Äôs non‚ÄďOscar winning Point Break)‚ÄĒeventually swelled into a bombast nearly indistinguishable from the subject of its satire. MacGruber‚Äôs winking distance from its spiritual progenitors‚ÄĒsituated just a stone‚Äôs throw from the knock-knock pastiche of the ZAZ team‚ÄĒmight suggest inferior directorial smarts, but in this case, less is more.

Or at least, less is more behind the camera, because Forte doesn‚Äôt have an unsubtle bone in his body. Introduced Rambo III/Hot Shots! Part Deux‚Äďstyle chilling at a monastery, his killing days behind him, MacGruber is as much a one-dimensional creation as the skits around him. He‚Äôs an alpha-dog posturer who, given even the slightest push by friend or foe alike, collapses into infantile meanness and irrationality. He‚Äôs thus a close (if exponentially deadlier) cousin to Ron Burgundy, and indeed, there‚Äôs not too much separating Wills Forte and Ferrell besides the latter‚Äôs box-office bulk. They‚Äôve both predicated their comic personas on the pursuit and retrieval of the laugh at any cost, including personal dignity and narrative coherence (Anchorman may be the most surreal non-animated American film comedy of the aughts). That MacGruber will accept the invitation of his former C.O. (Powers Boothe, good as a cut-rate Richard Crenna) to help the U.S. government apprehend playboy sociopath Dieter Von Cunth (Val Kilmer, loving it) is of course a fait accompli, and Taccone has fun with the convention of the team-building-montage, parading a slew of muscled (and game) WWE employees in front of the camera before having them fall victim, en masse, to their recruiter‚Äôs lethal incompetence.

It‚Äôs in the aftermath of this snickering tragedy that MacGruber really puts its cards on the table: taken off the case, our hero pleads for another chance with scrubbed subordinate Lt. Dixon Pyper (Phillippe), a fugue of teary self-abasement that builds to an offer of fellatio. ‚ÄúI‚Äôll fucking suck your dick, man‚ÄĚ sobs Forte, and while the mere intimation of gay panic surely isn‚Äôt funny, the utter and complete desperation in his dinner-plate eyes‚ÄĒthe certainty that this might actually work‚ÄĒabsolutely is. The thing about this scene, even with its lame, sitcom ending (Boothe walks back in and sees MacGruber with his pants at his ankles; sad trombone noise), is that it doesn‚Äôt quite feel safe, as if Forte/MacGruber was actually willing and capable of anything. That feeling lingers for the rest of the film. The key is that Phillippe and Wiig (whose eternal, anxious sidekick gets fleshed out to the extent that she‚Äôs a songwriter with a surname derived from a Brat Pack movie: Vicki St. Elmo) are credibly incredulous for the entire running time, as if they were also simply watching Forte‚Äôs unbecomingly intense star performance, rather than actively supporting it.

This WTF dynamic sustains MacGruber through its plot (such as it is), en route to an ending where Forte tries to defuse a bomb (actually, a nuclear warhead trained on Washington, D.C.). Taccone‚Äôs strategy is to hit each narrative mark with a cartoon sledgehammer: the inevitable sex scene between Forte and Wiig starts off as a soft-focus incense-and-fingertips spoof before a rude detour into Lynchian rumpy-pumpy by way of Deliverance. (Predictably, MacGruber‚Äôs visit to a loved one‚Äôs gravesite goes much the same way). And then there‚Äôs the violence, which is so crazily hyperbolic that it goes beyond parody. MacGruber makes good on his claim to Pyper that his preferred tactic is to rip out his opponents‚Äô throats, with enough CGI arterial spray for a Ninja Assassin sequel.

One‚Äôs opinion may vary on the humorousness of such things, but it‚Äôs hard to not admire ‚ÄĒor at least acknowledge‚ÄĒthe way that the film frames its lead as a sociopath. This without the dumb-ass ‚Äúself-interrogation‚ÄĚ of Jody Hill‚Äôs Observe and Report, which swung for the shock-farce fences yet contained nothing so disturbing as the mini-Shining goof in which Pyper cops a peek at MacGruber‚Äôs journal. I‚Äôll admit to being a pretty easy laugher, but the scene where Forte lays out the full scope of his history with Kilmer‚Äôs Von Cunth‚ÄĒi.e. why the latter turned a wedding into a gruesome Kill Bill parody‚ÄĒleft me helpless and full-body heaving like nothing since the similar revelation monologue in Team America (‚ÄúYou can‚Äôt blame yourself for something gorillas did‚ÄĚ). If MacGruber‚Äôs bludgeoning M.O. is finally too simpatico with its namesake‚ÄĒand one does wish for a little bit of finesse amidst the hammering, as there was in, say, Harold and Kumar Go to White Castle‚ÄĒthere are worse ways to feel coming out of a comedy than worked over. Call it less punch-drunk love than punch-drunk like.