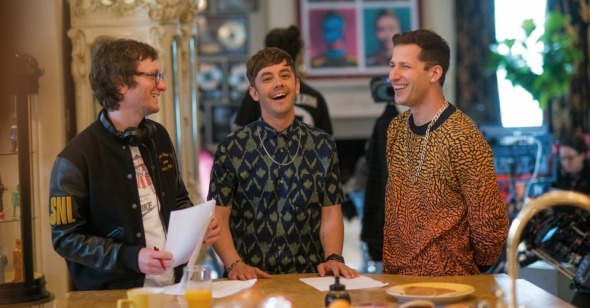 In its final, show-stopping scene, Popstar: Never Stop Never Stopping offers up a glorious example of a comic principle we might term the Rule of Infinity. In improv, the Rule of Three states that a gag is funniest when it’s delivered one, two, three times spaced out over the course of the show. The Rule of Infinity—which, like much of contemporary comedy, can be traced back to that Simpsons episode where Sideshow Bob steps on the rake—doesn’t bother with little niceties like timing: do the gag again and again and again, the rule insists, until it’s gone from funny to funnier to unfunny back to funny, and then on to sublime.

Popstar ends on a concert stage, with Conner4Real, a sort of Bieber-Drake-Eminem-Kanye composite played by Andy Samberg, reuniting with his two best friends and former boy band members, played by Jorma Taccone and Akiva Schaffer (Schaffer directed, though it seems right to credit the trio for a film so preoccupied with the joys of collaboration). On one level, the song they perform, “Incredible Thoughts,” is an obvious knock at the pseudo-deep nonsense that stars write when there’s nobody brave enough to call out their bullshit. (The song is an even better sendup of Joan Osborne’s “What If God Was One of Us?” than the one from Austin Powers: The Spy Who Shagged Me.)

But there comes a point (for me, it’s right around the time when the guys rap, “A nun dunked a basketball, living the impossible/ A man breaks his leg … inside a hospital!”) where the jokes fly so fast that what they’re spoofing ceases to matter and they achieve a state of absurdity for absurdity’s sake to which most recent comedies have only aspired.

That this performance plays like musical sketch comedy should surprise no one. For a shade under two decades, the Lonely Island—the triumvirate officially formed by Samberg, Schaffer, and Taccone in December 2001—has been getting this kind of thing down to a science; first online, then on SNL, then onscreen. It began in Berkeley, California, in the early 1990s, when Schaffer and Taccone met in seventh-grade Spanish class (appropriate, since the style of comedy they’d later perfect is the Platonic ideal of middle school humor). The slightly younger Samberg joined the crew later; they attended high school together, kept in touch after going off to different colleges, and afterwards, with no better plan, moved to L.A. and commenced making short films (“lonely island” is a nod to the crappy apartment they all shared).

On the strength of a couple of these, Samberg joined the cast of Saturday Night Live in 2005, with Schaffer and Taccone signing on as writers. The next few years of pop culture included a bundle of SNL Digital Shorts written and performed by the Lonely Island: “Lazy Sunday,” “Dick in a Box,” “I’m on a Boat,” “I Just Had Sex,” all three-minute variations on their hysterically on-the-nose titles and all grounded in ridiculously catchy melodies.

This was also the year YouTube was founded, a fact that helps explain why, for a long time, it was impossible to go more than a day without someone showing you a Lonely Island video. It was also (full disclosure) the year I entered the 7th grade. These were good months in which to be a gross middle schooler with an older brother, the same months that first exposed me to Anchorman, Wedding Crashers, The 40-Year-Old Virgin, Borat, and other cuts of cartoonish raunch I now remember with a mixture of embarrassment and nostalgia. Many of the films were brought to life by some combination of Adam McKay, Judd Apatow, Steve Carrell, Will Ferrell, Seth Rogen, and Ben Stiller, and at first the Lonely Island was often lumped in with this crowd, though in hindsight the differences seem obvious enough. Compared to McKay and Apatow, the two most talked-about American comedy auteurs of the 2000s, the trio seems more effortlessly goofy in its approach, more adept at surreal sight gags and shrewdly paired musical and physical comedy.

You can already see the Island touch in Hot Rod (2007), which began as a Will Ferrell vehicle but under the trio’s stewardship quickly evolved into a looser, wilder work, full of “cool beans” back-and-forths and long rants on the merits of AM radio. Hot Rod, the Lonely Island’s first feature, includes two musical interludes that can stand with the best of the SNL shorts: one featuring Andy Samberg punch-dancing to “Never” from Footloose, the other a radiant, slo-mo montage, set to John Farnham’s “You’re the Voice,” that devolves into a riot. Eighties schlock flows like water through the Lonely Island’s work—Hot Rod’ssoundtrack includes no fewer than three tracks from the Europe album The Final Countdown, none of which is “The Final Countdown.” But there’s rarely a sense that music from the trio’s youth is on trial. “Post-parody,” Wesley Morris called it back in 2007: Hot Rod doesn’t ridicule pop culture tropes so much as commit to them 150 percent, until they’ve mutated into something weirdly, paradoxically new.

It was inevitable, then, that the Lonely Island would direct a full-blown musical. Popstar crams enough immortal anthems into its 86 minutes to embarrass the other recent American contributions to the genre: besides the aforementioned “Incredible Thoughts,” there’s “Equal Rights,” in which Conner4Real raps “I’m not gay” ad nauseam while defending gay marriage, unaware that it has been the law of the land since June 2015; “I’m So Humble,” featuring a double-hologram of Adam Levine and some nonpareil false modesty; and “Ibitha,” a love letter to the people of Ethpaña.

In his review of Hot Rod, Morris knocked the Lonely Island for failing to let audiences get “lost in a movie,” for stringing together one “short, poppy nugget” after another. Popstar has a more coherent story than its predecessor, not that this automatically makes it any better—plenty of the great comedies (Duck Soup, The Ladies Man, Sleeper, Monty Python and the Holy Grail) consist basically of short sketches held together by a faint rumor of plot. What’s most satisfying about the plot of Popstar is the way it echoes the filmmakers’ real-life friendship.

Samberg, Schaffer, and Taccone play Conner, Lawrence, and Owen, childhood buddies who rise to fame together, only to drift apart when one of them rises faster than the other two. Samberg’s career in the last decade has been spotty to say the least—nothing remotely approaching the superstardom of the character he plays—but he’s a household name in a way that Taccone and Schaffer aren’t. While it would be silly to suggest a purely biographical reading of such a hyperbolic comedy, the jealous arguing in Popstar packs a surprisingly authentic punch, as if these three real-life friends are riffing on their own nagging insecurities. By the same token, the gang’s hangout sessions and climactic reconciliation feel genuinely warm.

All of which suggests that Popstar, despite having more than its share of short, poppy nuggets, is at heart an old-fashioned comedy of remarriage, with a musical trio in place of a romantic duo. Strictly in this sense, it’s not all that different from the bulk of 21st century Apatow/McKay comedies. One reason why Popstar’s ending is so much more enthralling that of the typical Seth Rogen movie—the kind aptly summarized by Nick Kroll as “the guys are friends and then they’re not friends and then at the end of the movie they’re friends again”—is that the characters’ reconciliation never feels formulaic, whether or not it really is. Instead of giving the impression of a lazy writer’s room tying up loose ends, the final act brings out some of the Lonely Island’s nimblest work, their knack for milking a joke put in the service of a good screenplay instead of a three-minute video (witness Conner’s drawn-out apology to Lawrence, or Lawrence’s “three Tom Pettys” monologue). When Conner, Lawrence, and Owen take the stage for the final time, they haven’t matured all that much—Popstar has the good sense to let them stay bombastic fools, as long as they’re bombastic fools together.

At least as far as this country is concerned, Conner4Real is in surprisingly classy company. In his 1955 study Love and Death in the American Novel, the critic Leslie Fiedler showed that American fiction has always starred overgrown boys lost on quixotic quests (Augie March, Ishmael, Dean Moriarty), avoiding responsibility for as long as possible before they reach an inevitable, uneasy truce with society. At their strongest, these sorts of stories critique the adult world their protagonists flee—Huck Finn is a naïve kid, but we’d much rather spend time with him than with any of the scummy con artists he meets along the Mississippi.

There’s a little of Twain in Popstar’s one oddly moving scene. Conner, reunited with Lawrence and Owen, sees a newly famous rapper (Chris Redd) flip out on his manager—he seems to be falling into the same narcissistic hellhole Conner’s just dug himself out of. Here, the Lonely Island seems to be making the case that its own boyish goofiness is the only way to thrive in an industry that pushes people to take themselves painfully seriously.

Thrive, or at least live to fight another day. It’s a bad sign that Popstar—for my money, one of the only recent indications that Hollywood comedy can be an exciting genre—failed to break even at the box office, possibly because it didn’t traffic in “reboots, sequels, and products,” “unearned … late-second act pleas for pathos,” or “referential meta-comedy,” to list some unfortunate tics of 21st century American humor identified by Violet Lucca in an article for Film Comment.

By the end of the film, Conner, Owen, and Lawrence have found a way to survive in the music industry without sacrificing the whimsical good fun that inspired them to make beats in the first place. This is exactly the sort of truce between boyhood and adulthood Fiedler identified—but who knows how long it’ll last? As for Samberg, Schaffer, and Taccone, one can only hope that they’ll get their hands on another movie, and, if they do, that they’ll be allowed to do it their way. We could all use more of their sensibility, one that’s best summed up by the title of another weird, wonderful musical extravaganza: stop making sense.