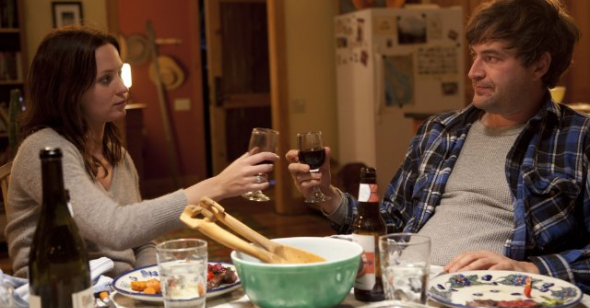 A year after his brother Tom‚Äôs death, Jack (Mark Duplass) remains disconsolate and adrift. Rock bottom comes in embarrassingly public fashion. During a party celebrating Tom‚Äôs death anniversary, where friends toast to his brother‚Äôs memory, Jack cuts through the platitudes with his own tribute, a tough-love, you-didn‚Äôt-know-him-like-I-did spiel that harshes everyone‚Äôs mellow. Grasping for spontaneity, the scene can only mimic it, and doesn‚Äôt even come within hailing distance of anything resembling truth. Studied casualness gives way to calculated awkwardness‚Äîbullshit punctured by more bullshit.

And so begins Your Sister‚Äôs Sister, Lynn Shelton‚Äôs follow-up to her 2009 breakthrough, Humpday. It‚Äôs a step up to the majors for Shelton: mumblecore mainstay and Humpday star Mark Duplass is in it, but he‚Äôs joined by bold-faced names Rosemarie DeWitt and Emily Blunt. It‚Äôs also poised to be her most critically acclaimed film‚Äîfestival screenings at Toronto and Sundance have been rapturously received. The near-unanimous praise is frankly befuddling. Middlebrow Hollywood slumming in mumblecore Northwest, Your Sister‚Äôs Sister is an almost perfect specimen of indiewood mediocrity. It‚Äôs as self-regarding and unadventurous as the audience it has its eyes on. I‚Äôd be shocked if it weren‚Äôt a modest hit.

A comedy of contrivance that gives off the whiff of a dusted-off workshop draft, Your Sister‚Äôs Sister never recovers from its inauthentic opener. Following Jack‚Äôs outburst, Iris (Emily Blunt), his best friend and his brother‚Äôs ex, tells him he just needs ‚Äúheadspace‚Äù and offers him the keys to her family‚Äôs secluded waterfront cabin in the San Juan Islands. There will be healing‚Äîbut not after some twists, of course. Arriving at the cabin in the dead of night, Jack discovers someone else there: Hannah (Rosemarie DeWitt), Iris‚Äôs sister. It turns out that Hannah is there to lick her wounds after the break-up of a seven-year relationship‚Äîwith a woman, she tells Jack right off the bat, to extinguish any hope of a hookup.

Jack‚Äôs intrusion is clearly unwelcome, but after a few shots, Hannah loosens up‚Äîenough to end up in bed with the schlub. But there wouldn‚Äôt be a movie if this were just a one-night stand. Come morning, a hung-over Jack wakes up to the sound of Iris pulling up into the driveway. It turns out Jack has feelings for Iris and forces Hannah to promise that she won‚Äôt say anything about their tryst. Meanwhile, Hannah has her own secret, one that leads all the way to a premature cut-to-black ending involving a home pregnancy kit. And somewhere an anonymous ex-writer for Friends weeps at the knowledge that the path to indie credibility was this easy.

Dressing down a lame sitcom scenario with the ums and uhs of strained naturalism, Your Sister‚Äôs Sister mistakes improvisation for authenticity. Blunt and DeWitt, handed the impossible task of making it all believable, flail away to their noticeable discomfort. Only Duplass displays any facility with Shelton‚Äôs methods, to mixed effect. He has his moments, especially during his one-night stand, and the morning after, when he has trouble playing it cool for the oblivious Iris. (‚ÄúI think she is empirically attractive,‚Äù he says when Iris asks if he thinks her sister‚Äôs pretty.) But Duplass‚Äôs Jack ultimately comes across less as a breathing, struggling being than a compendium of traits and tics that panders to its progressive audience‚Äîthe witty, sensitive, self-regarding doofus, so charming even a hot lesbian couldn‚Äôt resist.

This brings us to the movie‚Äôs treatment of sex. Shelton‚Äôs handling of homosexuality in her last two features has been, shall we say, curious. Humpday told the story of best friends, two straight males, who dare each other into being in a gay porn film. The two‚Äîand the movie‚Äîwuss out in the end. For those scoring at home, in Shelton‚Äôs cinema, it takes 90-plus minutes for two straight dudes not to have gay sex, but (in Your Sister‚Äôs Sister) only about 20 minutes for a lesbian to jump in the sack with a dude. Like any good boho dispatch, this one treats gayness matter-of-factly‚Äîso much so that it may not seem to realize that it‚Äôs using homosexuality to sprinkle a patina of transgressiveness on the whole thing. Think of it this way: Save for the oh-no-she-didn‚Äôt shock of Hannah‚Äôs seduction of Jack, the story would be exactly the same had she been a straight woman. Homosexuality has nothing to do with the truth of the character‚Äîbut everything to do with Shelton‚Äôs idea of entertainment.

Set in Washington (those shots of the gorgeous San Juan Islands may be the only things worth your while), Your Sister‚Äôs Sister recalls another Northwestern mumblecore effort that dabbled in genre, last year‚Äôs Cold Weather. Aaron Katz‚Äôs film took microbudgeted naturalism down a noir path but saw genre for what it was: a means to finding out something true about the characters navigating its tropes. Its exploration of a sibling relationship was a miracle of small truths and elided exposition.

If Cold Weather foregoes incident and the big speech, Your Sister‚Äôs Sister is built on both. Indeed, Shelton‚Äôs film can seem almost parodic if it didn‚Äôt mean what it was doing. It is, after all, the kind of movie in which a depressed character tells us in the first act that she used to love to paint‚Äîand actually gives us the third-act payoff of the character putting brush to canvas. It‚Äôs the kind of movie that puts its loser hero on a bicycle the whole movie‚Äîonly to have him trash it symbolically in the third act because, you know . . . character development. It‚Äôs the kind of movie that prides itself on its dialogue‚Äîbut then relies on a montage set to gentle strumming to begin the healing. Bland and mendacious, Your Sister‚Äôs Sister would have been better off had it shed its pretensions to realness and embraced its essential disposability.