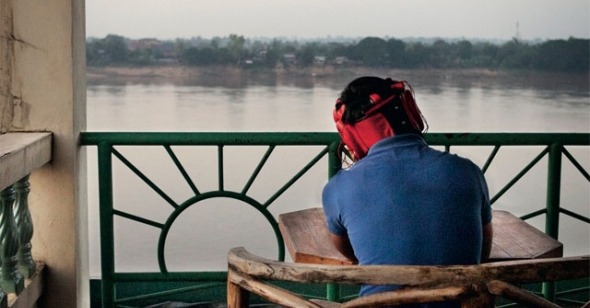 A Cup of Joe
By Michael Koresky

Set along the Mekong River, which marks the border between Thailand and Laos, the latest film from Apichatpong ‚ÄúJoe‚Äù Weerasethakul is a vaporous film that‚Äôs a borderline in and of itself. Existing on a thin, delicately walked bridge between past and present, comic horror and realist drama, drifting lyricism and harsh atonality, Mekong Hotel is an hour-long avant-garde film that has much in common, thematically and visually with Apichatpong‚Äôs narrative features. One might even see it as a continuation of such leisurely works as Tropical Malady and Uncle Boonmee Who Can Recall His Past Lives, both also languorous‚Äîbut their similarities have less to do with pacing than tone. When he‚Äôs working in a shorter format, the director by necessity has to focus more, meander less. The expanse of narrative feature filmmaking frees him up to explore, whereas his shorts can feel more predetermined, even at their greatest, as in Anthem, Worldly Desires, and A Letter to Uncle Boonmee (a precursor to the feature and part of his ‚ÄúPrimitive‚Äù project, much of which exists as traveling installation work).

In staying in one place, Mekong Hotel is mysterious but circumscribed; there‚Äôs less space allowed for its enigmas to take possession of the viewer. Here, the power comes less from vivid imagery than in Apichatpong‚Äôs overall concept, a bit of barely explicated folklore about two women, Jen (Boonmee‚Äôs Jenjira Pongpas) and her daughter, Phon (Maiyatan Techaparn), whose bodies have been taken over by cannibalistic ‚ÄúPob‚Äù ghosts. Viewers familiar with the director‚Äôs magical realist fancies will hardly bat an eye as this oddly parceled out story takes shape, even when he reveals sweet-faced Phon snacking on a bloody human heart and kindly Jen gorging on dog entrails. In this filmmaker‚Äôs world, people are never merely themselves but vessels, symbols of stasis or transmogrification, often in the same body. An engagement with the sociopolitical and geographical present as much as a reckoning with the past (which separates it from the ‚ÄúPrimitive‚Äù project), Mekong Hotel is a pocket-sized survey of life in a region hit by the floods that wreaked devastating havoc all over northern Thailand in 2011; whereas many of his films are concerned with the ghosts of long ago, this film is about moving forward to unknown destinations.

Over a dark screen, it begins with crickets and other general outdoorsy sounds familiar to aficionados of ‚ÄúJoe‚Äù cinema, followed by the relaxing strains of classical-style guitar strumming. Peaceful imagery soon matches the slumberous tune, as we see a balustrade overlooking the river, and then the director himself, clutching a pad and pen as he sits aside Chai Bhatana, the guitarist responsible for the lilting music that will play constantly throughout the film (to almost maddening effect‚Äîwhat is at first gentle and cradling soon grows nearly intolerable due to repetition). The filmmaker is present for a sort of diffuse framing device: he has assembled cast and crew here at this hotel for rehearsal on movie called Ecstasy Garden, based on a stalled supernatural project he wrote many years prior concerning the bond between a mother and a daughter. (The director explained it to Dennis Lim in the New York Times as ‚Äúa mixture of animism and science fiction, but it was too expensive to make.‚Äù) Some of Mekong Hotel will consist of restaged scenes from Ecstasy Garden, while others have been newly conceived, and others seem like behind-the-scenes footage of its own making; which is which matters little, as there‚Äôs a fluidity between sequences that smoothes over the film‚Äôs essentially inchoate nature.

At first Mekong Hotel is so casual that it seems as though an outtake reel‚Äîearly on, the director‚Äôs go-to actor Sakda Kaewbuadee (the nephew from Uncle Boonmee with the irresistible grin) is trying on clothes in his hotel room, talking about crotch-flaunting jeans and complaining that every T-shirt has ‚ÄúJoe‚Äù on it, in a moment that intimates the director has become something of a brand. The scene comes off as neither self-regarding nor particularly self-critical, rather just matter-of-fact, an admittance of the personae behind these constructed realities. And because of the uniform shooting style and the consistency of the music, this offhanded scene feels no thematically different‚Äîno less or more crucial‚Äîfrom the scenes in which the characters muse about the historical and metaphorical significance of the river, which was known for carrying across Laotian refugees to Thailand, and from those in which the possessing Pob ghosts force them to do obscenely bloody deeds (of which we only ever see the gory aftermath). Unable to shed herself of the entity, Jen cries in bed, ‚ÄúI‚Äôm repulsed that I turned out this way,‚Äù in the film‚Äôs only overtly emotional moment.

More coherent in tone than in overall effect, Mekong Hotel is like a memory piece that seems to have forgotten what it‚Äôs memorializing. This might be appropriate, especially since the film, like so much of Apichatpong‚Äôs work, is about the malleability of identity and the need to figure out life‚Äôs next step despite the destabilizing trauma of the past. The most inexplicable image of the film is also its most haunting: a shot of a man‚Äôs head, from behind, encased in a strange contraption made of what looks like vinyl padding and wires. We never see his face, but we know something is altering his senses, blocking out the here and now. What does he perceive from behind this obscure and obscuring device? What do we perceive by looking at him? Apichatpong, never one to let his ghosts fully materialize, simply lets us look out at the river in one final, five-minute-plus shot, its surface skimmed by ever circling jet skis while the music plays on.