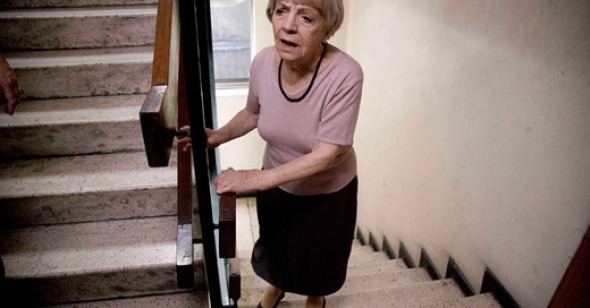 Old Cats is crammed with the stuff of life‚Äînot just the roiling emotions that take up space in its characters‚Äô heads, like regret, anger, neuroses, and occasional joy, but also the literal things that pile up in their houses: books, computers, medicines, and, most of all, tchotchkes. Chilean directors Pedro Peirano and Sebasti√°n Silva‚Äôs comic-tinged drama about aging and the deep-seated familial wounds begins with a series of shots of a drab, overstuffed urban apartment visible in gloomy morning light. Its living denizens haven‚Äôt yet awoken, but its objects seem to be imbued with life, or at least, decades of being collected and displayed have made them integral family members: porcelain felines, glass roosters, wooden carved horses, pillows decorated with unicorns. Everything is quiet, clearly waiting for some force to upend their slumber.

Then, of course, there are the portly indoor kitties waiting to be fed, pawing open the bedroom door with hungry desperation. As soon as they wake Isidora (B√©lgica Castro) and Enrique (Alejandro Sieveking), a couple in their seventies, it‚Äôs clear the theme of the day will be disturbance. First, a phone call from Isidora‚Äôs daughter, Rosario, who announces an imminent, unwanted visit; then there‚Äôs no food for the cats; Enrique‚Äôs computer won't turn on; and adding possible injury to insult, the elevator doesn‚Äôt appear to be working, a true hindrance for Isidora, barely walking on bad hips. But the most jarring turn of events clearly reflects Isidora‚Äôs failing mental capacity: increasingly confused and muttering to herself, she lets the bathroom sink overflow.

These early sequences, in which the camera stays empathetically, claustrophobically close to Isidora as she tries to make sense of her increasingly unfamiliar surroundings, are the film‚Äôs strongest and most unsettling. Peirano and Silva palpate Isidora‚Äôs inner world of terror and confusion with the slightest cinematic gestures (small zooms and trailing, over the shoulder camerawork), and we feel we know her even though we have just met her. And for her part, Castro is astonishingly vivid: across her tactile, toadlike features are a universe of secret smiles, grimaces, and inscrutable flashes of recognition and fear. If these early scenes between Isidora and Enrique, united also in their need to down a seemingly endless series of pills as part of their morning routine, feel remarkably lived in, perhaps that‚Äôs because, after a search, the filmmakers settled on shooting in the actors‚Äô (married in real life) apartment. It‚Äôs a delightfully cramped space that becomes a character all its own. And as in Silva‚Äôs previous film, the lovably unpredictable domestic dramedy The Maid, the home becomes a source of anxiety as much as a place of protection, a canvas upon which a series of fraught confrontations and shifting allegiances will be violently painted.

The comfort the apartment provides is severely compromised by Rosario‚Äôs visit. When she enters, it‚Äôs like a tornado has hit. Played by Claudia Celed√≥n, Rosario is a blotchy human disaster‚Äîthe first exclamation she makes upon coming through the front the door (and quickly running back out) is to insist that the cats be sequestered due to her allergies; soon, however, we can't be sure if the flaky, flaming red skin around her nose is due to the pets or her tendency to hole herself up in the bathroom every few minutes to snort some coke. It‚Äôs clear from Isidora‚Äôs resigned expression when she sits behind the table of avocado, cheeses, and breads she has spread out for her daughter, like a soldier steeling for battle, that there are profound, decades-old resentments here; Rosario does indeed initially seem like a loopy devil of sorts, an embarrassment to her mother, and certainly to her stepfather, who seems to have had just about enough of her antics. The last straw comes this day, when Rosario, with the help of her girlfriend, who goes by the pointedly masculine name Hugo (Cataline Saavedra), tries to pressure her mother to sign over her power of attorney, intending the money to go towards the women‚Äôs fishy-sounding venture to sell organic Peruvian soaps‚Äîapparently another in a long line of schemes Rosario has perpetrated on the family.

As the film continues, it‚Äôs clear that Peirano and Silva want to upend our expectations (much as Silva did with The Maid). Introduced as undeniable, unsettingly broad types, Rosario and Hugo, the flailing black sheep and the self-sufficient bull dyke, are given room to surprise. Perhaps there is something to Rosario‚Äôs rage and lack of sympathy for her mother, a valid resentment at not being accepted for her sexuality and outsider status? Maybe Hugo, despite her butchness, which so alienates Enrique and Isidora, is a family-oriented softie deep down? And then we start to wonder whether Rosario really is trying to raise money to help her mother move to an apartment more conducive to her ailments, as she claims, and not just swindle her.

These questions deepen the experience of watching Old Cats, but the directors‚Äô inability to completely meld their broadest and most sensitive tendencies results in an oddly lopsided film. Though Celed√≥n and Saavedra, unrecognizable from their roles in The Maid, in which they played a bourgeois mistress and her lifelong domestic, respectively, give chameleonic, full-throttle, lived-in performances, their entrance into the narrative is an emotional, even aesthetic hurtle the film never quite gets over. And the film‚Äôs reliance on third-act quick fixes certainly doesn't help reconcile its wildly shifting emotional registers. A realist depiction of aging eventually gives way to melodrama, signaled by a ludicrously discovered hidden note scrawled on a tissue and a Mildred Pierce-y slap across the face. Ultimately those details that make the first half of Old Cats such a treasure fall away in the face of a series of tired plot mechanics, and Peirano and Silva‚Äôs strongly evoked environment becomes just another set covered in stuff.