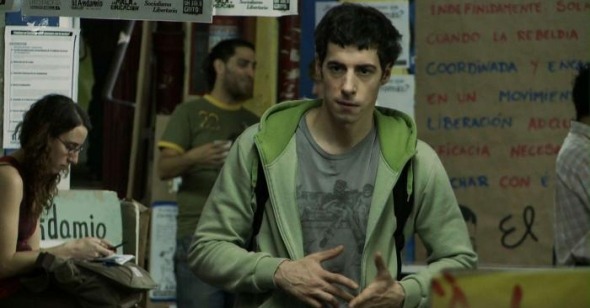 Starting in May 2011, massive demonstrations led by both university and high school students demanding greater educational equality and a complete deprivatization of higher education swept across Chile. Largely unreported in this part of the world, these protests comprised marches, a two-day general strike, and occupations of high schools and universities. While gaining widespread national support, these demonstrations also resulted in the death of at least one student, shot by a police sergeant firing into a crowd. The protests hint at a particular unified culture of student unrest rather unlike that in the United States, where the archetypal college student, long defined by Revenge of the Nerds and Animal House, spends more time binge drinking and contracting mono than engaging in politics. Glimmers of such a political movement can perhaps be seen in the involvement of students in Occupy Wall Street. Some may question what college kids, who enjoy the luxury of educational freedom and a lot of spare time on their hands, have to complain about, but, as the movement in Chile shows, student politics are related to politics at large.

Santiago MitreÔÇÖs The Student, from neighboring Argentina, suggests that student and national politics can be strange Machiavellian bedfellows. Through the eyes of Roque, a handsome, seemingly naive country boy who comes to the University of Buenos Aires after a couple of abortive attempts at higher education, the spectator enters the battleground of Latin American student politics, a site of byzantine administrative electoral wrangles, internecine struggles, and backstabbing that might as well be ancient Rome. Working with a tiny crew of six, Mitre captures a microcosm that resembles a war zone: graffiti and posters cover every inch of surface in the hallways, which are littered with broken furniture, garlanded with sloganeering banners, and are beaten to hell with what seems like decades of institutional neglect.

ItÔÇÖs little wonder, then, that Roque comes into this world without much commitment to education. More interested in getting laid than learning, he soon shacks up with the willing Valeria, but itÔÇÖs not long before his attention is diverted by Paula, an assistant professor and impassioned party organizer. Cutting a revolutionary figure in her military jacket while declaiming for student rights, Paula quickly catches RoqueÔÇÖs wandering eyes and draws him into extracurricular activities with a leftist party vying for control under the wing of grizzled faculty member and former politician Alberto Acevedo (played by Dean Stockwell doppelganger Ricardo Felix).

ItÔÇÖs at this point that Roque undergoes a reorientation of his priorities. Faced with his newfound comradesÔÇÖ capitulation to a political turncoat in the next election, Roque humbly offers his services (ÔÇťI donÔÇÖt understand anything about this, butÔÇŽÔÇŁ), initiating games of shrewd brinksmanship that knock out the competition in one stroke. His metamorphosis into a player of a very different kind prompts the spectator to ask a number of questions about RoqueÔÇÖs motivesÔÇöis he suddenly a political idealist, or merely an opportunist?ÔÇöand actor Esteban LamotheÔÇÖs winsome, ingenuous air effectively provides no easy answers.

In a flash, MitreÔÇÖs film plunges headlong into rapid-fire dialogue sequences, arcane negotiations, and backroom strategizing, leaving the audience as neophytes even as Roque himself blossoms into an adept political fixer under the wing of the mercurial, Mephistophelian Acevedo. With its offhand references to the recent histories of Peronistas of both left- and right-wing persuasions and party diehards crossing affiliations without warning, the film has left critics pondering whether MitreÔÇÖs insider view of the political topography of Argentina would prove too arcane for international audiences. MitreÔÇÖs screenplay, packed with circumstance thatÔÇÖs often difficult to fully comprehend, has drawn comparisons to the work of Aaron Sorkin for its profusion of surface detail, voiced with the distinctive patter of a certain kind of Latin American political speech. But its underlying meaning, more than its speed, is whatÔÇÖs truly daunting, betraying a subterfuge that one must listen closely for. Appropriately, though, the audienceÔÇÖs own engagement in the film takes on a sort of sink-or-swim quality; like Roque, and the filmÔÇÖs intimate camerawork, we become accustomed to leaning into each conversation, gleaning what we need to know to surviveÔÇöor at least to keep from being duped.

While RoqueÔÇÖs motivations and the precise reasons for his metamorphosis from greenhorn to shark remain obscure, his allegiance to Acevedo, to his friends, and to the cause remain impregnable, even as events become cloudier and slip from his control. Roque quickly learns from Acevedo how to settle disputes behind closed doors, but he soon learns the hard way that Acevedo has shadowy dealings of his own, negotiations that may help to further RoqueÔÇÖs careerÔÇöor else throw him under the bus. With each gradual increase in his power and influence, Roque seems more deeply mired in an ethical morass, expressed in the hazy, druggy guitar score by stoner metal band Los Natas. Each small victory poses its own questions about what properly defines the space of the political: is it the theater of electoral campaigns and rallies; the intimate relations among friends, comrades, and lovers; or the clandestine wheeling and dealing between administrative groups and political rivals?

When Roque is finally faced with an ultimatumÔÇöto choose between party loyalty, fidelity to his ideals, and the opportunity to advance his own careerÔÇöwhat is there left for him to do but reject the very terms that this political structure demands? Aside from some of the confusion that may arise from The StudentÔÇÖs unabashedly narrow viewpoint, esoteric subject matter, and dizzying pace, the choice that Roque faces at the filmÔÇÖs conclusion is clear: to pursue politics as a means of change and progress, rather than simply revert to the politics-as-usual of personal gain or one-upmanshipÔÇöon other words, to protest.