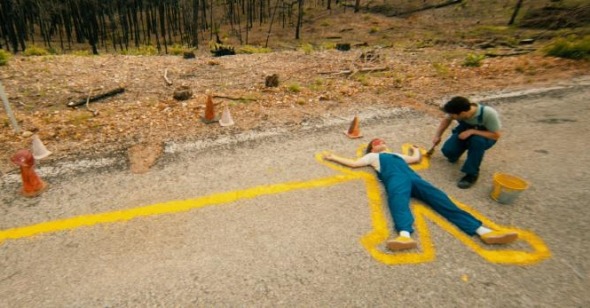 In David Gordon Green’s 2003 film All the Real Girls, the protagonist asks an old girlfriend if she’s ever seen a mistake in nature. He himself saw flock of ducks in a v-formation crashing into a house, and this sozzled barroom tale is Green’s metaphor for adult heartbreak: accidental harm is always more painful than premeditated cruelty. Green gets back to nature in Prince Avalanche, set in the ruins of a charred forest, shot entirely outdoors in Bastrop State Park after the East Texas wildfires of 2011. The story is situated in the aftermath of a previous disaster, in 1987, but the film incorporates documentary footage from the present—we see one woman, a real-life victim named Joyce Payne, picking through the ashes of her home.

Green’s eighth feature is about loss, reparation, and renewal. Paul Rudd and Emile Hirsch play a two-man “stripe crew” hired to repaint yellow lines on a stretch of park highway. This is an unusual kind of road movie; the only vehicles at the characters’ disposal are a comically small red work truck and a wheelbarrow, woefully modest tools for a Sisyphean task. Mostly, they’re on foot.

Shot with a small crew on the cheap in 16 days, Avalanche is a return to austerity for Green after half a decade’s work in big-budget comedies (Pineapple Express, Your Highness), cable (HBO’s Eastbound and Down), and TV commercials (including a 2012 Super Bowl spot, “Halftime in America,” starring Clint Eastwood.) Like his celebrated 2000 debut, George Washington, Avalanche is slow and sparse, padded with meandering negative space. Green cited the influence of Terrence Malick’s Days of Heaven on the earlier film, and here again we see cinematographer Tim Orr’s subtle zooms, “golden hour” treescapes, and lingering close-ups of insects and babbling brooks, images designed to carry us into the languorous pace of the wilderness.

Unlike his early indies, however, the latest is a comedy. Alvin (Rudd) and Lance (Hirsch) are a Bert and Ernie pair, stuck out in the sticks battling mother nature’s tedium and sexual frustration. Alvin is a bossy, finicky, self-styled outdoorsman, at heart a bookish city boy. In voiceover, he pines away for his girlfriend, Madison, writing florid, bilingual love letters (“I’ve been studying tongues for our German journey in the fall”). Madison, a single mother, would be better off with a guy who’s not painting stripes, eating squirrels, and listening to language tapes. She dumps him. Though Rudd’s bread and butter throughout his career has been romantic comedy, he shows real depth here, a personality of credible contrasts who manages to be both lovable and intolerable.

Opposite is Lance (Hirsch), Madison’s kid brother, a wannabe lothario who has no idea know how to pitch a tent or tie a knot, nor does he care; he just wants to rock out and get laid before he gets too “fat and old.” Horny but oblivious to his own innocence, Lance gives us the best scene, returning from a weekend in town with a tearful soliloquy about falling asleep standing up in his kitchen and failing to get past third base with his crush Maggie Johnston and then getting punched in the face by his “ex-best friend,” who happens to be Maggie’s boyfriend. Hirsch, who played a more sinister, battered cretin in Killer Joe, probably wears a black eye better than any actor working today. His gift is comic anguish. (Judging by his Twitter feed and the devil-may-care sweatpants he wore to the SXSW premiere of Prince Avalanche, Hirsch seems like he may be a bit like Lance in real life.)

We could extrapolate all sorts of personal messages in the story, but Green didn’t write it. Avalanche is a remake of a 2011 Icelandic film, Either Way, directed by Hafsteinn Gunna Sigurosson. I haven’t seen the original, but the trailer on YouTube demonstrates the extent of Green’s appropriation, from scraps of dialogue to copied shots, including some drunken joyriding in wheelbarrows. Reportedly he’s next remaking Dario Argento’s Suspiria. This willingness to commit cinematic heresy may demonstrate a lack of interest in building a cohesive “legacy.” Critics seem to have a hard time writing about Green’s career because he evidently doesn’t want to be painted into a corner. When I interviewed Jeff Nichols earlier this year, he described Green as less auteur than workaholic.

On the other hand, Green may be more of an evolving artist than he lets on. His early films were leaden with woe, then the pendulum swung to slapstick; perhaps he’s synthesizing these two strands of his work. He began this experiment a while ago with Eastbound and Down, for which he redeveloped Danny McBride’s bit part as Bust-Ass in All the Real Girls into antihero Kenny Powers. Similarly, with Alvin and Lance, Green puts “comic relief” figures in the foreground. Avalanche is more melancholy and understated in its silliness than Eastbound, but it’s still hilarious. In Avalanche, Green is finding his equilibrium, the right ratio of levity and tragedy. It’s not a throwback, but evidence of a new sensibility.