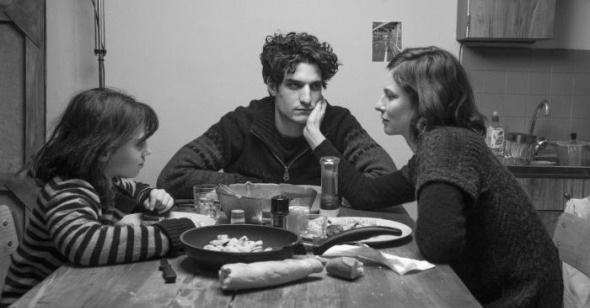 The Real Deal
By Max Nelson

There is a question that‚Äôs been haunting Philippe Garrel at least since he stuck it into an exchange near the start of his elegiac 1991 film I Can No Longer Hear the Guitar: ‚ÄúHow can someone be too real?‚ÄĚ One of that film‚Äôs principal characters, a sunken-eyed young painter, suggests an answer: ‚ÄúYou dodge around, make mistakes, kid yourself. There are infinite different degrees of reality. All things are real, but we‚Äôre more or less in touch with reality, more or less close to it.‚ÄĚ At their simplest, Garrel‚Äôs films are about this closeness‚ÄĒbetween people, but also between a solitary individual and reality. ‚ÄúReality‚ÄĚ here, admittedly, tends to mean the reality of depressive French creative types in periods of emotional flux, which makes Garrel‚Äôs films sound dangerously slight and frilly. Certainly, these are lovely, delicately composed movies‚ÄĒbut their beauty is rarely tacked-on or incidental. Instead, with each shot Garrel seems to be looking for the shortest, cleanest route to his subjects in all their clumsy, bodily, ‚Äúreal‚ÄĚ presence. There‚Äôs not a movement of the camera or a dab of light that doesn‚Äôt bring us into closer, more intimate contact with something, or, more often, someone. It‚Äôs an approach that has resulted in a handful of unforgettable portraits: Maurice Garrel (the director‚Äôs father) giving an extended, tender monologue in Regular Lovers; Johanna ter Steege weeping to the strains of a non-diegetic guitar in I Can No Longer Hear the Guitar; and, in the opening shot of Garrel‚Äôs latest feature Jealousy, a blonde, short-haired Rebecca Covenant struggling to hold back tears against a sparse backdrop, fixing her face in a fragile smile while the fringes of her mouth quiver beyond her control.

Jealousy‚Äôs 77 whittled-down minutes play less like a single, continuous narrative than a series of isolated incidents, each enclosed by its own set of borders and calibrated to its own private sense of time. A little girl lies curled up in bed listening to her parents break into a major, definitive fight. Her dad‚ÄĒa tousled, angular Parisian played by the director‚Äôs son and frequent leading man, Louis Garrel‚ÄĒraces his new girlfriend up the stairs to her flat until the two of them collapse in a breathless heap. The new couple goes for a walk in late autumn, or maybe early winter; she shivers; he wraps her in his scarf. He‚Äôs an actor rehearsing a new play; she‚Äôs an actress out of work. (One day after rehearsal, he kisses his cute costar backstage, first cautiously, then passionately.) They visit an elderly scholar, who reads them Seneca; in a strange gesture of disciple-like veneration, she washes the older man‚Äôs feet. Daughter, father, and stepmom go for a walk in the park, bond and eat a communal sandwich‚ÄĒwhich forms the basis for a heart-wrenching exchange between the girl and her mom later that night. Eventually, jealousy sets in on all fronts. Things change, but nothing in particular really advances: instead, the film ebbs and flows from moments of high tension to precarious stasis to passive-aggressive antsiness to fragile contentment.

Garrel‚Äôs actors excel at aimless maneuvering, spontaneous gesturing, uncontrollable fidgeting, and unself-conscious sprawling out, and one of the reasons his films feel so lifelike is that they‚Äôre always expanding their own parameters to account for these shifts in tone, dynamics and pitch. Take Louis‚Äôs park-side stroll with girlfriend Claudia (Anna Mouglalis) and daughter Charlotte (Olga Milshtein): the way Charlotte announces she‚Äôs cold at an odd, dead-time moment, as if the temperature had really just struck her that second; his genuine reproach when he finds out they swiped a lollipop; their half-hearted mock backtracking, like they can‚Äôt decide whether or not to teach him a lesson for being such a bad sport; his ill-timed concession; the way the space between them is always widening and contracting, moving beyond and back inside the limits of the frame. The scene dawdles, backpedals and stutters in all the right ways‚ÄĒwhich is to say, all the ways in which life stutters dawdles, and backpedals. (See also a father-daughter tickling match that indescribably toes the line between innocent play and sexualized threat, as if the actors had gotten so lost in their roles they‚Äôd forgotten which way to sway our response.)

It might be tempting to make the same charge against Jealousy that the Austrian satirist Karl Kraus made against Heinrich Heine‚Äôs Gallic-inspired travel writing: that it‚Äôs the product of ‚Äúa culture for which the mere material of daily life suffices as a complete artistic experience.‚ÄĚ It‚Äôs easy to scoff at the way Claudia whines about going out of her wits in her ever-so-slightly cramped Parisian flat (‚Äúthese cupboards!‚ÄĚ), or at the film‚Äôs general lack of self-awareness (although you couldn‚Äôt by a mile accuse it of lacking comedy or warmth). It‚Äôs all very refined and p√©tillant, the sight of these romantic French theater people with their small, significant gestures, their ambles, breakups, jealousies, mentors and chats about Seneca‚ÄĒbut is it art?

This question is more acute in Jealousy than in, say, Regular Lovers, whose dissatisfied, aimless young people had the excuse of standing in for a generation, and for an especially volatile moment in French national history. Here, there‚Äôs very little such historicizing. Like any good romantic, Garrel treats his characters‚Äô mental wellbeing as a matter of life or death in itself: emotional minefields, he suggests, leave real scars, if not always real casualties. A tactless outburst in a mother-daughter exchange (‚ÄúWho broke it off, you or daddy?‚ÄĚ), a brief, illicit moment of connection between two single parents during a kiddie matinee, a slight hardening of the shoulders or a distant, vague reply can take on soul-shaking proportions. Sometimes all it takes is a change in the weather. But Garrel is no over-sensitive aesthete: like Renoir, he‚Äôs obsessed with combing through the material of daily life for crumbs of something essentially, characteristically human. Also like Renoir, he knows that these glimmers of shared humanity tend only to be visible after they‚Äôve been filtered through class, tinted by culture, and masked by various kinds of performance both public and private. This doesn‚Äôt stop Garrel‚ÄĒand this is, perhaps, where he and Renoir diverge‚ÄĒfrom trying anyway to break down experience into a partial catalogue of classless, timeless, de-contextualized particles.

Garrel‚Äôs insistence that there‚Äôs a common thread running through all human experience, irrespective of circumstance or class, certainly limits his thematic range‚ÄĒnot to mention the size of his audience. Still, no contemporary relationship drama shares Jealousy‚Äôs deep-set, hopelessly utopian faith in the ability of art to lift the veil from life‚ÄĒjust as no one shares Garrel‚Äôs flair for capturing the unadorned intricacies of human behavior. His closest cinematic relatives‚ÄĒas several critics have already suggested‚ÄĒdate back more than a century, to actuality films like the Lumi√®res‚Äô Le repas de b√©b√© or James White‚Äôs turn-of-the-century Paris street scenes. Jealousy seems to come from a time when movie subjects didn‚Äôt have to act, only exist; when you didn‚Äôt need a story to make a film, only a handful of faces and an excess of space. With so many movies today bloated on their own expense, it‚Äôs refreshing to be reminded how rich the medium can be when it‚Äôs at its barest of means.