Norte, The End of History 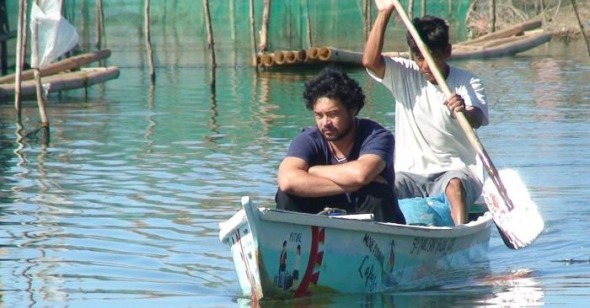 All You Need Is Lav
by Jeff Reichert

Over the past decade-plus, Filipino filmmaker Lav Diaz‚Äîa name known, when it is at all, by those cinephiles paying the closest attention to wrap reports from far-flung festivals‚Äîhas emerged as the latest in a long line of filmmakers whose work, by dint of length, austerity, obscure subject matter, or other form of commercial impenetrability, is more whispered about and lusted after than actually seen (thus increasing the degree to which it‚Äôs lusted after). Think of those years prior to Flowers of Shanghai and Werckmeister Harmonies when Hou Hsiao-hsien and B√©la Tarr entered the cinephile‚Äôs imagination solely via the pages of Film Comment or Cinemascope. Lav Diaz feels similarly on the verge. He has made twelve films since starting out in 1998, but given that his works generally run in excess of six hours, he‚Äôs cobbled together an output that most filmmakers wouldn‚Äôt near if they‚Äôd made thirty regular-sized movies. Diaz is a filmmaker who could only work in this digital age, yet his films have barely screened in the U.S. at all. (New York‚Äôs late, great Exit Art pulled off an ambitious four-film retro a few years back.) His latest, the trim-at-four-hours Norte, The End of History, following a tremendous reception at Cannes, debuted at the New York Film Festival in 2013, and now comes to theaters thanks to the intrepid lunatics over at Cinema Guild.

All extant writing on Diaz suggests a coherent, cogent, and highly daunting (his Evolution of a Filipino Family runs over eleven hours, and he often shoots in murky black-and-white digital video) body of work deeply concerned with Filipino history and identity and heavily inflected by brushes with the Western canon, especially Dostoevsky. Though several of his films skirt around and pick up themes and situations from the Russian author‚Äôs most venerated work, Norte is Diaz‚Äôs first full-throated stab at Crime and Punishment. His Raskolnikov is Fabian (Sid Lucero), a brilliant drop-out law student introduced in the film‚Äôs rangy first scene spouting off his own personal philosophy, one that twists the ethical ambivalence of the postmodern moment towards an essentialist view that demands the negation of those things he deems ‚Äúwrong.‚Äù His audience consists of two former law professors (one is a transsexual, a fact which goes barely remarked upon, telegraphing early in the film Diaz‚Äôs easy disregard for societal norms) who exhort Fabian to return to school and finish his studies. He ignores their pleas, asks to borrow some rent money, and heads home to a small apartment so he can feverishly pound out some writings on his laptop.

After establishing Fabian, Diaz introduces us to Joaquin (Archie Alemania), a lower-class laborer who lives with his wife, Eliza (Angeli Bayani), her younger sister, and his two children in a small home. Joaquin has recently been hobbled by an accident (we first see him on crutches, leg in a cast, leaning on his family to help him walk home) whose provenance is never revealed, but it‚Äôs clearly serious‚Äîin the next several scenes we spend with the family we watch as an ever more desperate Eliza attempts to first pawn several purchases made for the planned opening of a family food stand, and later highly personal effects, to the grotesque local moneylender, Magda (Mae Paner). The film‚Äôs first hour intercuts scenes of the increasingly desperate straits of Joaquin‚Äôs family with instances of Fabian growing ever bolder, ever more convinced of his own righteousness‚Äîhe belittles and alienates his small circle of law-school acquaintances, seduces a close friend‚Äôs girlfriend, and openly reveals the affair, earning him a punch in the face, all the while swilling copious cans of beer.

Some time passes before Diaz reveals that Fabian is also a client of Magda‚Äôs, though anyone who‚Äôs read Crime and Punishment will have long expected him to wind up desultory in her office asking for a loan. Diaz‚Äôs film maintains a sly calendar throughout: Joaquin is first seen with a full leg cast, later his family cuts it off and replaces it with a thick bandage, eventually, he‚Äôs able enough to limp off to a construction job. (A tossed-off line of dialogue earlier in the film reveals the doctor‚Äôs proscribed length of recuperation for those paying close attention‚Äîby the time Fabian meets Magda, a few months have passed). His family‚Äôs lot grows little better. Finally, at wit‚Äôs end, Joaquin assaults Magda in plain sight of her teenage daughter. That night, in the first of several brutal acts of violence (generally carried off discreetly out of sight, yet rendered discomfortingly audible via crisply detailed sound design), Fabian stabs Magda to death. Upon exiting the scene of the crime, he sees her daughter watching from across the hall and butchers her too. The next day, Joaquin is arrested sent to jail, and Fabian continues his life. Fabian‚Äôs crime, Joaquin‚Äôs punishment.

It‚Äôs at this point that our wayward Raskolnikov cedes the film for long stretches to the tale of Joaquin‚Äôs family. Eliza takes work as a vegetable seller, and continues to struggle for survival. At one point, she‚Äôs cruelly dismissed by the lawyer she paid for to defend Joaquin; his best strategy was for the accused man to just quickly confess. Joaquin, for his part, suffers the expected abuses of prison, but maintains a saintly stoicism in the face of all adversity. When a prison boss who‚Äôd beaten and cut him earlier is hobbled by a stroke, Joaquin, instead of dishing out just desserts, becomes the man‚Äôs caretaker. When we drop back in with Fabian, he‚Äôs moved to a new town and taken work at a diner dressed up in a 1950s American veneer. Several years pass.

As noted in a Film Comment article on Diaz and Norte by Noel Vera, a scribe far more familiar with the Philippines than I (the most experience mainstream U.S. culture today has of this, the seventh-most populous of Asian nations, is the long-haired elf who now fronts Journey), the film is shot in former Filipino leader Ferdinand Marcos‚Äôs hometown (Paoay) and Fabian‚Äôs tale closely mirrors that of the disgraced leader. Both brilliant law students, both hungry for better lives, both involved in brutal murders‚ÄîMarcos was convicted for the assassination of a political rival, and then, while studying for the bar from prison, successfully argued an appeal and was acquitted, making him an instant celebrity. For Diaz, a calculated Nietzschean murder was the primal scene for his nation‚Äôs modern period and his film seems to parallel the Philippines‚Äôs troubles since becoming an independent state. As his upper-class villain slinks off into dissolution, flirts with religious fervor via a Christian study group, and comes to something approaching a conscience before descending further into madness and violence, the lower classes soldier on in their sufferings, beaten down by consequences beyond their control.

Unlike other examples of ‚Äúslow cinema‚Äù (a designation as worthy of retirement as ‚Äúvulgar auteurism‚Äù), Norte‚Äôs leisurely running time isn‚Äôt an attempt to probe cinema‚Äôs durational qualities. Rather, Diaz accrues moment after moment in the lives of his characters because of a classical interest in detailed, layered narrative, which aligns his films more with Dickens and Tolstoy than any of his cinema contemporaries. Sure, he‚Äôs able to bust out a distended, temps mort take with the best of them, but there‚Äôs rarely a shot in Norte that doesn‚Äôt feel packed with incident, even if those incidents are merely small gestures and everyday interactions. From Joaquin watering plants and making paper lanterns in prison, to Eliza, heartbreakingly and patiently explaining to her bullied daughter how, even though her father is in prison, he is not a criminal, the cumulative force of Norte is devastating. Given just how much stuff is in Norte, it‚Äôs easy to wonder for a moment if those partisans of serialized television would happily digest a filmmaker like Diaz if his works were broken into up in 52-minute chunks.

This is probably wishful thinking, given Diaz‚Äôs reliance on largely static frames interspersed with the occasional stately track or push in on the action. (From readings around the web, this limited mobility seems an expansion of a former, obsessively static mise-en-sc√®ne.) Though it‚Äôs an often violent work, Norte offers a becalmed overall vibe that recalls the serene pacing of films by Edward Yang; Norte has the sweep of Yang‚Äôs Yi Yi, but trades that film‚Äôs warmth towards its characters for a more observational regard. In ways, these epic-length films are opposites, with Yang viewing his urban characters‚Äô foibles almost as if through a sheen of ever-so-slightly reflective glass, yet always overwhelmingly kindly, whereas Diaz descends right into the midst of a darkened rural environment, lighting it with lurid colors (one tableau of a garish mansion features no less than six different hues of light emanating from in and around the structure), and pushing ever toward the nightmarish, oppressively dashing his characters‚Äô hopes along the way.

There‚Äôs a moment near the beginning of Norte‚Äôs third act when it seems a deus ex machina might emerge and bring about happy endings for all (this, in contradiction of an early scene where Fabian and his friends laughingly dismiss the use of such devices in Hollywood film), but this momentary optimism is not allowed to settle in. The film‚Äôs grim, deeply sad finale may not convince as fully as what‚Äôs preceded it, as Norte‚Äôs characters sometimes seem to suffer overmuch, and feel more like pistons put into motion grinding and churning to power a relentless machine than flesh-and-blood creations. But there aren‚Äôt likely more than a handful of major artists who can be said to have upped the ante for seriousness on Dostoevsky. This may not warrant a badge of honor in and of itself, but Diaz‚Äôs purity of intent and aesthetic command cannot be denied. He ends his epic with something close to a grace note, as three of the film‚Äôs characters wander into frame from the funeral that we assume has happened offscreen. History may have long ceased, but life keeps rolling along.