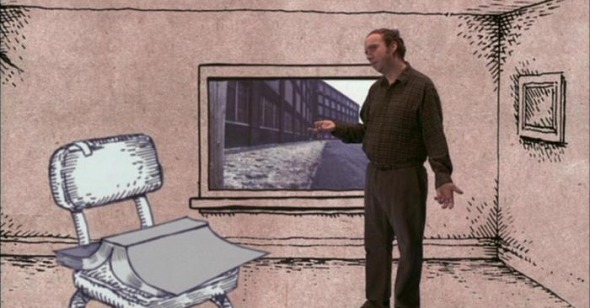 It Came From New York
by Nick Pinkerton

Our man Harvey Pekar, for those still unacquainted, has made ends meet with a steady gig as a V.A. hospital file clerk in his hometown of Cleveland for the past 30-odd years. And his might pass for a perfectly familiar, hardly noteworthy American existence of whining desperation, save one peculiarity: he‚Äôs got a habit of extracting and recording select, cursorily unremarkable moments from his daily existence that, for most members of his working-class milieu, die and disappear every day. He captures these dialogues, monologues, and memories with the rigor of an ethnographic surveyor, ennobling and immortalizing them with his attention, his discretion, and his fine-tuned ear, before finally having them illustrated by a rotating stable of artists. His work, in startling defiance to the rampantly onanistic self-regard that the bio-comic format has subsequently fertilized, neither reduces nor magnifies the author in relation to the rest of the world, remarkably placing everything in scale and locating its author in the world around him. And the result of his labor, an ‚Äúadult‚Äù comic book he has published semi-regularly since 1976 called American Splendor, has actually won our man some modicum of underground recognition. This has become one of the running jokes of Pekar‚Äôs doggedly realist oeuvre, which never ignores its agenda of depicting the whole truth long enough to let us forget that observation changes the observed, that his co-workers are constantly bombarding him with anecdotes and wrongly remembered jokes, elbowing for a gleam of the spotlight, hopefully asking Harvey, ‚ÄúIs that a Harvey Pekar story?‚Äù

Odd to say then that American Splendor, the new Pekar biopic by documentarians Robert Pulcini and Shari Springer Berman, is about the furthest thing possible from a Harvey Pekar story. And, for what it‚Äôs worth, the film doesn‚Äôt seem too preoccupied with trying to be one, perhaps realizing the impossibility of such within the constraints of commercial filmmaking. Pekar‚Äôs comics, though never denying or dodging life‚Äôs very palpable plot points (divorce, death, disease, etc.), have always allowed equal space to the vast level-ground of the quotidian, whereas the American Splendor movie condenses a quarter-century of meticulous comic book autobiography, pluckily skipping from big life event to big life event, swept along by the strumming of sweet Cheap Suit Serenaders‚Äô strings and indifferently-selected jazz culled from the Ken Burns boxed set. We scat into Pekar‚Äôs first encounter with then-unknown R. Crumb (a frighteningly spot-on James Urbaniak) during the latter‚Äôs early Sixties tenure in Cleveland, then to the duo‚Äôs first collaboration, along to Pekar‚Äôs wedding to Delaware fan-girl Joyce Brabner (Hope Davis), past his belligerent mid-Eighties appearances on Letterman, and right on through to his cancer year and sourly-heartwarming adoption of an acquaintance‚Äôs daughter. And though some of Pekar‚Äôs keenly observed miniatures of everyday dialogue make it to the screen, they mostly play as ‚Äúordinary folk say the darndest things‚Äù asides, overworking for the kind of easy laffs that the less obtrusively comedic ‚ÄúSplendor‚Äù strips never much cared to get. Of the gaping divide between text and interpretation, one of the film‚Äôs comic-style intertitles says it all: ‚ÄúAnd the next thing, it‚Äôs the 80‚Äôs.‚Äù The level of briskness here seems completely alien to Pekar‚Äôs comics, which remind us that life, when all accounted for and attended to, is composed of so much.

So what places American Splendor above the crowd of sliced-life cinema? For most of the movie‚Äôs critical champions, at least, it‚Äôs the film‚Äôs scrap of formal poise; the straight narrative is intercut by and interacts with documentary footage of Pekar himself, as well as with a few awkwardly animated frames and drawings from the ‚ÄúSplendor‚Äù strips. The reasoning behind all of this is pretty neatly and too-explicitly expressed during the opening credits, where a gamut of Harveys, both flesh-and-blood and pen-and-ink, explain that ‚Äúdifferent artists draw me all kindsa ways, but hey, I‚Äôm also a real guy.‚Äù The representational crowd is all here and accounted for, and from among their ranks it‚Äôs supposed that a composite of the real Pekar will stand up. But this aesthetic hook feels strained, like the result of a brainstorming session (‚ÄúSure it‚Äôs another biopic‚Ä¶but with a difference!‚Äù) rather than a natural outgrowth of the material. For those who still get a kick out of seeing that fourth wall go tumbling on down it‚Äôs doubtlessly amusing, but I can‚Äôt help but think that the filmmakers would‚Äôve more honestly earned their avant-garde stripes with a movie that follows Pekar, in real time, from 9-to-5 at his Cleveland V.A. hospital, in classic Jeanne Dielman/Warhol style. This, of course, is probably why nobody entrusts me with directing their biopics.

Most of the notice for American Splendor has naturally centered on its Pekar, all-purpose schlemiel Paul Giamatti, previously best known as Pig Vomit in Howard Stern‚Äôs Private Parts, now switched into full-on career overhaul mode. As played by Giamatti, Pekar is a battered-and-half-bowed lumpenprole with a chin-to-chest slouch and a harried look of eternal wariness, like a paranoid turtle perpetually on the verge of a full retreat into his thrift-store down jacket shell. But there‚Äôs something crucial conspicuously absent from this imagining of Pekar, and it‚Äôs the same missing something that hobbles the translation of American Splendor to film. What‚Äôs mostly lacking is the Pekar that Crumb, in his introduction to the first ‚ÄúSplendor‚Äù anthology, describes as ‚Äúseething, intense, burning up, always moving, pacing, jumping around,‚Äù or, more to the point, as ‚Äúa driven, compulsive, mad Jew.‚Äù Too-passive Giamatti is all sad-sack schtick; his impassioned diatribes are laced with the queasy petulance of someone who already knows he‚Äôs lost the fight, going to the mat with a whine instead of a real donnybrook.

This all goes back to American Splendor‚Äôs simplistic formula for the presentation of reality and unsentimental truth: take traditional ‚ÄúHollywood bullshit‚Äù values and flip-flop them with pancake precision, as in Joyce and Harvey‚Äôs first date, an absolute catalogue of a-romantic catastrophe. The lantern-jawed superhero of kiddie comic fare is replaced by a weak-chinned every-mensch, any threat of sentimentality is followed by a disclaimer of put-on curmudgeonliness, but the effect of this allegedly fresh breath of reality is something like turning your underwear inside out and saying you‚Äôve changed them; they may seem clean, but they‚Äôre still the same underwear, and the damn things stink.

Though Pekar‚Äôs magazine (‚ÄúFrom Off the Streets of Cleveland‚Äù) and mentality (‚ÄúI‚Äôm waitin‚Äô for dose Cleveland jokes. Go ahead!‚Äù he jabs at Letterman) are both proudly regionalist, Springer-Berman and Pulcini‚Äôs film would seem to support Joyce‚Äôs assertion that most American cities are depressing in the same way. The Clevo of this movie is just another gray-green notch on the rust belt, distinguishable from Wheeling, Erie, or Pittsburgh only by the Browns memorabilia scattered around by a stuck-for-ideas art department. Gone is Pekar‚Äôs attention to the city‚Äôs ethnic enclaves, his pitch-perfect recollection of the city‚Äôs black, Slav, Polack, or Italian-American dialects, or even the gray presence of the forebodingly named Terminal Tower, certainly the grimmest-looking centerpiece to any American skyline. This Cleveland is a flyover hinterland with no identity in and of itself, existing merely as the negative image to the coastal cultural poles, a generic culture-forsaken Not New York where the growth of art takes on the exotic novelty of a palm tree in North Dakota. American Splendor may claim to be about the mistake on the lake, but there‚Äôs no mistaking that its gaze is always telescoped in from the HBO offices in Manhattan, home to our leading contemporary manufacturers of Art Lite.

If nothing else, Splendor deserves thanks for preserving more of the ostensibly real Pekar for posterity. One of the chief pleasures the film offers is a chance to hear the author reading from his own work; listening to his dialogue bubbles come alive, one gets a new sense of Pekar‚Äôs gift for monologue, his fine cadence and clarity of expression. Best of all is his narration to ‚ÄúAlice Quinn,‚Äù the story of bachelor-era Harvey‚Äôs chance meeting with an old, now married female acquaintance and, in passing, discussing Theodore Dreiser‚Äôs Jennie Gerhardt. For a moment, as Pekar‚Äôs strained, raw voice hits its grace notes, recalling with a sad rasp like funerary brass a moment when ‚ÄúLife seemed so sweet an‚Äô so sad an‚Äô so hard t‚Äôlet go of in the end,‚Äù the film seems almost deserving of all the outsized attention it‚Äôs been paid. The movie‚Äôs take on ‚ÄúAlice Quinn‚Äù is a beauty, a delicately told, melancholic meditation on the strange intimacy of letters, a particularly Midwestern brand of intellectual lonesomeness, and the sorry shades of dead opportunities. And is it a Harvey Pekar story? Damn near, guys. Damn near.