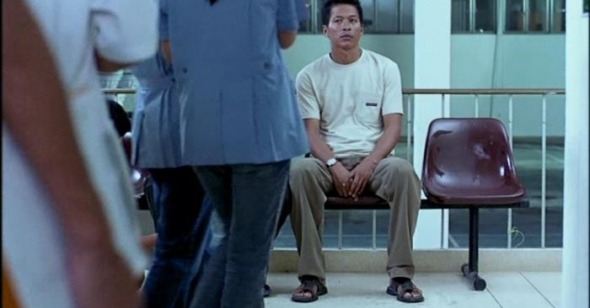 Reviewers intent on dismissing innovation will sometimes huff about this or that formal adventure showing ‚Äúdisdain‚Äù for the audience or ‚Äúdisrespect‚Äù for the efforts of the actors. This reactionary habit turns an artistic experience into a social encounter where good manners are everything (especially the sort that tend to reinforce critical self-regard). I must admit that I did take Tropical Malady personally, but in quite a different way. I can‚Äôt remember my surprise at the narrative key change midway through, partly because I can‚Äôt imagine the movie existing any other way. What I do remember, vividly, is how the change soon felt so natural, and for one simple, well-mannered reason: the deep, abiding trust Apichatpong Weerasethakul elicits through the first half made me feel utterly comfortable with whatever direction he might take.

How better to make a movie on love, trust, and desire than by example? Yet Tropical Malady‚Äôs plunge into the jungle asks us to set aside our own narrative desire for the romance between the two young men to work out on its slow but sure naturalistic path. On a second viewing this rupture no longer seems as sudden; the erotic undercurrents flow one segment into the next, and at the beginning of the film a strange shot becomes recognizable as an overture. When the soldiers move on from their macabre photo session with a corpse, the camera tightens in upon some grasses to no apparent purpose and cuts to a long shot of a naked man walking across the glade. A nude in the wilderness: both an image of paradise, truly free man; and, with the actor posed for a moment in the center of the frame, a nature diorama of man the beast. (‚ÄúAll of us are by nature wild beasts‚Äù begins the film‚Äôs epigraph...)

The figure walks into the brush, not to be seen again, at least until after one of the two young lovers, Tong, himself disappears into the night (into the same right-hand part of the screen, in fact). He seems to take that first half, the courtship, with him, but through a sequence that‚Äôs like a series of dreamy cross-fades‚Äîa thousand variations on hands passing us over and through to another realm. Beautiful soldier Keng rides with others in an army truck, a soundtrack of soaring pop washing over everything and preparing the transition. The camera lingers on the dust that billows behind the truck like the cloud surrounding a genie. Then, suddenly, a cut to Tong asleep in bed; soon he sits up and blinks awake, as if from the dream that was what preceded. Now Keng is wandering through the same house, arriving at the mysteriously now-empty bedroom; time or who knows what else has passed. Voices (overheard? in Keng‚Äôs memory?) talk about the beast on the prowl (‚ÄúThe villagers are scared shitless‚Äù). We‚Äôre getting there...

Keng flips through Tong‚Äôs photo album, shifting us to the mode of memory, but on the last photo the picture flickers out, looking as if someone had physically put his hand over the lens (two splayed fingers‚Äô breadth of photo remains visible for a second). After a few seconds of blank screen, a new image fades in to replace the photograph: a traditional drawing of a tiger. A brief demo of an intertitled shamanic legend ensues, but, by way of an odd historical mention that the starring tiger is in a museum, segues to the apparent reality of Keng entering the jungle. We pass with him through one last gate, a makeshift wooden barrier to the tiger‚Äôs domain.

Taken from any one point in the transition, the second half is an apparition, a reverie, a vision, a refigured memory, a trickster‚Äôs interruption. Earlier in the film, someone tells a fable about two greedy fishermen that is visualized for us but that comes to a clear end; so, too, does the shaman‚Äôs tale, book-ended by the tiger glyphs. But when Keng reappears to forge ahead in the jungle, it is like a dream sequence that begins and forgets to close. At night the tapestry of leaves and shadows is a place we have to put together in flashes, Keng‚Äôs flashlight a spotlight searching the image for us. When these two hunters finally do meet in daylight, their struggle is barely visible in a long shot of the grassy glade, as if we could never quite conceive their ultimate contact.

Keng‚Äôs long wait in the jungle encompasses trials (leeches, fierce man-beast) and wonders (a know-it-all baboon, a tree aflame with fireflies, the prehistoric-like artifact of a cicada shell). His is a lover‚Äôs vigil, a total devotion to be rewarded by one who will ‚Äúdevour‚Äù him (as Mr. Baboon puts it). So, too, are we devoured, giving ourselves over to Weerasethakul‚Äôs playful stewardship of our visions and desires.