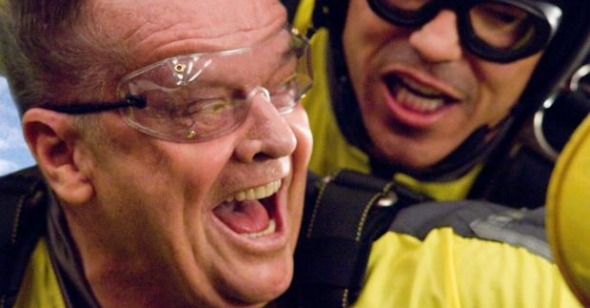 Death on the Enjoyment Plan
by Benjamin Mercer

“This is really living!” exclaims Edward Cole (Jack Nicholson) right after he jumps out of an airplane. The Bucket List, Rob Reiner’s dying buddy “comedy,” has a complex and ultimately very troubling conception of what “really living” really is; the film unwittingly spends most of its running time in moral free fall. The terminally ill Edward and Carter Chambers (Morgan Freeman) embark on a whirlwind tour of exotic locales, indulging in such boys-will-be-boys flights of irresponsibility as parachuting, racing cars with extreme recklessness, and flirting with attractive younger women. It’s all for the best, though, because when they finally return home, that otherwise boring family stuff feels comparably meaningful. It’s too bad that all 70-year-olds don’t have the courage (or the finances) to get such last-minute perspective on life.

The odyssey begins inauspiciously in a hospital room in California, where Edward and Carter become unlikely roommates. Carter is a modest mechanic of modest means, and an apparently loving husband, father, and grandfather. He is also a trivia buff who talks back to Jeopardy!, always with the right answer. His affinities for offering anecdotes about world religions and spinning wisdom out of fun facts must have sent screenwriter Justin Zackham to the far ends of Wikipedia. Edward, on the other hand, is a crass womanizer and domineering tyrant who refuses to call people by their real names, instead substituting ones he prefers. He calls his assistant (Sean Hayes) “Thomas,” because his real name, Matthew, is “too biblical”; he eventually also dubs Carter “Ray.” Edward unashamedly refers to several of his ex-wives as “sequels.” Since he doesn’t have any family or friends, he lords his expensive tastes over anyone within earshot. He also happens to own the hospital in which the first part of The Bucket List unfolds, a place that is, appropriately, an overcrowded hellhole.

Both of these men are undergoing rather brutal chemotherapy treatments for their respective cancers, and perhaps the most surprising thing about Reiner’s film is that it does not play their frantic and pathetic stumblings to the bathroom for laughs. Carter shivers feverishly in the night. Edward reacts to the shaving of his head with horror, and an operation on his brain leaves him with a large wormlike scar over his ear. This hospital room is filled with monotony and continuity errors—reading glasses disappear from one shot to the next, and the arrangement of sheets on beds mysteriously changes as well—but it is also an uncompromisingly bleak place.

This gloom is all quickly dispelled once Edward and Carter fully recover from their treatments and surgeries. They know they each only have roughly a year to live, but they don’t let that stop them from becoming unusually spry old men again. (Curiously, Edward’s hair grows back over that gruesome scar.) One day, on a lark, Carter starts formulating a “bucket list”—a list of the things he wants to do before he kicks the bucket—something he remembers from a freshman philosophy course he took in college, where it was for some reason assigned as “an exercise in forward thinking.” Edward spices up the list with a few naughty ideas of his own (kiss the most beautiful girl in the world!), and then they set off on an impromptu world tour bankrolled by Edward (“All I’ve got is money!”). It is unclear exactly what the trip has to do with the list. Riding motorcycles over the Great Wall of China, which they are shown doing in montage, is not on the list, and driving a Shelby Mustang, which is on the list, wouldn’t seem to require traveling thousands of miles away from Carter’s family. Vague, entirely subjective things such as “witness something majestic” comprise much of the list. But staying close to home is the furthest thing from their minds, and they meet every item on their itinerary with super-youthful vigor. During the trip, the only reminder of the virulent cancers destroying their bodies is a minor catheter mishap Carter has in the French Riviera. This problem is solved by a bubble bath.

The Bucket List is a colossally stupid movie, but it is ultimately difficult to decry its lack of verisimilitude when its air of unreality is so pervasive. Exotic locations—the pyramids of Giza or the Taj Mahal, for example—are rendered in weird, oversaturated colors, and are so odd-looking that one begins to suspect they are intended to look artificial. The limitless vitality of Edward and Carter is perhaps the most outlandish aspect of the film, but the “bucket list” itself proves similarly indestructible. Edward and Carter keep one copy of it, which they constantly pass back and forth, to consult and emend. It is a piece of paper torn from a legal pad. That piece of paper is immediately wadded up by a defeatist Carter, thrown on the floor, picked back up the next day, and smoothed back out. It is written on a good deal more, and many things on it are quite forcefully crossed out. At one point, it is angrily torn into pieces, but it shows up several scenes later completely intact, as neatly folded as ever. At least the invincible body finds an analogue in the imperishable piece of paper.

But these improbabilities wind up encroaching on an emotional core that is certainly meant to be authentic. Reiner clumsily uses the profoundly fake-looking exotic scenes as backdrops for serious emotional revelations. In the film’s most moving scene, Edward tells Carter how he became estranged from his only daughter. When Edward finishes, Reiner cuts to a wider shot of the two from behind, and we are awkwardly reminded that this crucial piece of emotional backstory has been delivered from the top of a pyramid. The emotional resonance of the scene is instantaneously diminished by this shot, clearly just two actors in front of a green screen.

Even earlier on, Reiner carelessly undercuts the emotional integrity of his film. Edward is wearing some kind of mirrored, periscope-type glasses that allow him to watch television while lying flat on his back when his doctor informs him that he has mere months to live. We see Edward’s shifty eyes tearing up only as reflected in the mirrors at the top of his glasses. Perhaps this is supposed to tell us something about Edward’s denial or the distance he keeps from other people, but it just looks horrendously out of place, a gag desperately in search of a punch line. Nicholson and Freeman also look quietly desperate. They are not playing people so much as disjointed composites of their other characters from the last ten years or so. For Nicholson, this entails being wealthy, old, and unapologetically vulgar (Something’s Gotta Give, As Good as It Gets, etc.); for Freeman, it means going through the motions of another reverent voiceover (Million Dollar Baby, The Shawshank Redemption, etc.). No amount of charisma could create the illusion that anything about The Bucket List is really living.