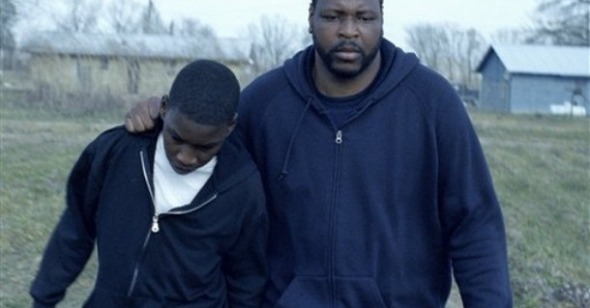 Whittling It Down
An Interview with Lance Hammer
By Jeff Reichert

Lance Hammer‚Äôs Ballast, a low-key, artful debut shot in the impoverished lowlands of the Mississippi Delta stunned at Sundance 2008, especially in a field chock-full of hardly independent dreck like Hamlet 2 and Choke. Like aesthetically dissimilar films Baghead and Momma‚Äôs Man in its attempts to bend cinematic language around an intensely individual perspective, Ballast is a three-person tragedy writ small, assembled from bits and shards. It‚Äôs been a long time since a young American filmmaker announced him or herself with such cinematic brio and assurance. Reverse Shot sat down with writer-director-editor Lance Hammer during his recent trip to New York to promote Ballast, which he is self-releasing.

Reverse Shot: Let‚Äôs start by talking about your background as an architect and how this experience was useful in building Ballast almost literally from the ground up.

Lance Hammer: What I learned in architecture school was that the design process is a lengthy one that begins in the field of all possibilities. You have to delimit these possibilities, and it‚Äôs always a balance between using an intuitive understanding of something coming from the right brain, where everything is chaotic, and trying to inject enough structure so that the idea can eventually become material. The thing is crude and ugly at first, but gradually the more you study it the more refinements you make. And you have to have faith in it through all those ugly stages. Writing is the same way, as is filmmaking.Like architecture there‚Äôs technology involved, and crews. So, assuming you get to the point where you have a shooting script you then have to include other people and computers and camera equipment while still trying to protect that initial right-brain idea. It‚Äôs a delicate balance. I think I suffered at first in architecture school because I thought I had to conceive of a brilliant idea all at once and just spit it out onto paper. When I didn‚Äôt have the brilliant idea, I didn‚Äôt proceed, but it took me a while to realize that the brilliant idea was actually a series of small steps forward, and a lot of failures.

And that‚Äôs what editing is: You shoot all this material that doesn‚Äôt work, but you don‚Äôt need to show that to anybody. If you shoot at a 12:1 ratio, you only need one take to work, and then you can throw away the other eleven. That‚Äôs certainly been my experience in editing this film.

RS: Could you talk about the editing in relation to the movie you initially thought you might have made when you wrote the script? The film you‚Äôve ended up with is highly elliptical, but it seems very precise.

LH: I think continuity was the first thing I threw out the window when we began editing. Continuity editing in classical terms is pointless these days because audiences have sophistication with the language. I was interested in this film being extremely economical in every aspect, especially in the editing, to the point where I didn‚Äôt want to show anything that wasn‚Äôt completely necessary. All the stuff that happens in between two events doesn‚Äôt need to be shown. You just need the two events, or even just two expressions; showing the in-betweens is wasteful. I had faith in the audience to follow a line without all the steps in between, and the ellipses are based upon that faith. If you remove dramatic chunks of time, it also allows you to cram a lot more story content into 96 minutes.

RS: Was there an initial version of Ballast that was a lot longer?

LH: Yes. I wasn‚Äôt certain while shooting it that I was even going to cut the film. I was intending to, but I didn‚Äôt tell anybody. I made the film preparing for two possibilities: we shot it with long roving masters, and I was thinking of using a lot of those in their entirety. Eventually I realized that this was going to be a film in which I just took fragments from all over the place and juxtaposed them together. That‚Äôs where I was going to find the best moments, and what‚Äôs most important in editing is finding the best human moments, the best expressions, the best words, the best physical performances. That dictated the editorial aesthetic. In the coverage, I really didn‚Äôt want to do shot/reverse shot‚Ä¶your journal is called Reverse Shot, but I‚Äôm not a big fan of the reverse shot.

RS: Nor are we, ironically.

LH: The cinematographer, Lol Crawley, and I discussed how to get coverage via long takes, maybe nine or more of them through a scene. We would favor one actor in one take, and another in the next, and so on. It was all very intuitive and I didn‚Äôt know if I had the coverage most of the time‚Äîit was just purely on feel. Eventually we got to the point where we‚Äôd just do two takes and I‚Äôd feel like we had it, but in the beginning I‚Äôd have to do nine or ten to feel comfortable. Lol knew when he needed to focus more on one actor in take three as opposed to another, so a lot came from his choices as well. In that sense we were both directing.

RS: I know you‚Äôve said that you‚Äôre not as interested in narrative in this film, but in that kind of a shooting setup how do you then cram in all this stuff, the incident that this film has? Is it actually easier because you‚Äôre dealing in fragments?

LH: I think so, yeah. For my personal taste, there‚Äôs too much story. I‚Äôm still very sensitive about that. My goal was to make something very lean, vey thin narratively. And maybe that editing technique tempted me to put more story in. You literally have the physical time to do that when you remove so many frames. To be honest, I just did a transcription of the film, a dialogue draft of the script that matches what was actually shot, and it‚Äôs only sixty pages. My script was 101 pages when I started, so 40 percent of the ‚Äústory‚Äù is actually gone. And yet there‚Äôs still a lot of shit happening.

RS: Can you talk a little about your play with sound? There are moments in the film where you hear that people are talking, but you‚Äôre obviously not supposed to understand what‚Äôs being said.

LH: A lot of things we just don‚Äôt hear. And my experience in the South is that it‚Äôs difficult to understand the accent. But that‚Äôs kind of unimportant because you get a lot of it too. You just put it together. The human brain is extremely capable of interpreting meaning from fragments. And in editing, I wanted to present the film that way, but I worried if I went too far that people just might not understand at all. I was trying to modulate that. It was very important to leave it realistic. I wanted people always to be engaged. Trying to listen, trying to interpret. It‚Äôs a slow film, so it‚Äôs a method of engagement.

RS: You say ‚Äúrealism,‚Äù and Ballast does capture a real lived-in experience, but that aesthetic ideal as you‚Äôre applying here is so far from the realism that people are used to in film that it almost becomes its own kind of expressionism.

LH: I think this film, any art form actually, is intensely expressive and because it‚Äôs coming from one person, it‚Äôs narrow. That‚Äôs the importance of a work of art: it‚Äôs one person‚Äôs point of view. I was intent on doing something very personal, but I wanted to use a language that was realistic.

RS: You‚Äôve mentioned Robert Bresson as a big influence on your filmmaking, and he‚Äôs, in some ways, employing a similarly mannered version of realism, especially around editing choices and narrative construction. In L‚ÄôArgent, for instance, there‚Äôs a pretty big story with a bunch of characters‚Ä¶

LH: I‚Äôm trying to remember L‚ÄôArgent‚Ä¶I keep thinking of Pickpocket. Even in the Eighties, Bresson‚Äôs editing language is pretty conventional‚Ä¶

RS: The editing language is conventional, but I guess I‚Äôm talking more about the shots he chooses and the arrangements he makes between shots. Ballast reminded me of this in that it‚Äôs all about exchange value and what you‚Äôre getting in the space between the shots.

LH: Bresson talks about each shot itself as being boring; if you just looked at it on its own, it would mean nothing. There‚Äôs no drama, no emotion. Yet the choice of the filmmaker to put one shot against another creates drama, emotion. If you watch one clip of Bresson it‚Äôs boring. And some people would argue that the whole films are boring, but the editorial process in his work is perhaps the most important part and the part that he speaks of most reverently. And I agree, having been through all the parts of the process. That‚Äôs where the film is discovered. In our case where so much of the film is improvised we had to find that story. That‚Äôs where you define tone particularly via the juxtaposition of image against the other, and then you create new meaning via associations that they didn‚Äôt have separately. I spent most of my time there.

RS: How long was the edit?

LH: Just under two years. I had a cut ready for the 2007 Sundance deadline and I was about submit it, but I didn‚Äôt feel strongly that it was the film I wanted to present. A friend of mine said to me: ‚ÄúDon‚Äôt show anybody anything until it‚Äôs perfect. Take as long as it takes. You only get one chance.‚Äù Those words were looming large at that time, so I decided to pull back and take a full year to re-edit and submit to the 2008 Sundance Film Festival. The film completely changed, totally transformed.

RS: Could you say what the other possible Ballasts you created along the way look like?

LH: Some of them are horrific. That‚Äôs the difficult thing about directing and then editing: you‚Äôre locked away in a room with a bunch of bad material. Only filmmakers understand that most of what you record is shit. And then you spend two years constantly looking at stuff that‚Äôs failed miserably. And in the end you whittle it down to only what works. Still, in your brain you‚Äôre thinking, ‚ÄúGod this film is horrible.‚Äù If anyone gets a hold of my hard drive, I‚Äôm finished.

RS: That Lance Hammer, he‚Äôs a charlatan! Do you have any idea of where you‚Äôd like to go next?

LH: No, not really. I had a project that was ready to go and was considering that, but this process, which has been really rewarding, has opened up a lot of opportunities on the one hand but has also made me question what my motivations are and where I really fit into this world, and I really don‚Äôt know at the moment. I‚Äôm in the middle of distributing Ballast myself, so I can‚Äôt really give it a whole lot of thought right now. I‚Äôm immersed in the heart of the industry, and it‚Äôs not where I feel the most comfortable. I can‚Äôt wait to get back to a cave and write and think about what‚Äôs important instead of advertising costs.