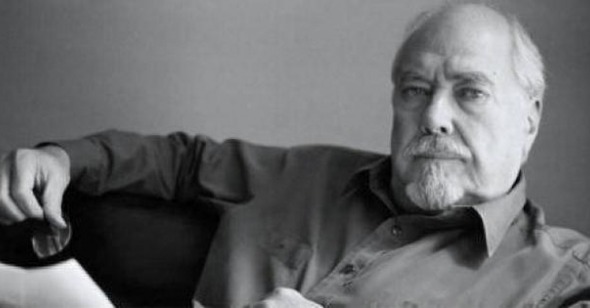 Radio Days:
An Interview with Robert Altman
by Nick Pinkerton

Almost any praise‚ÄĒor condemnation‚ÄĒI could drum up for Robert Altman‚Äôs body of work would be redundant. What has he done for us lately? Aside from harangues against the Bush administration and public marijuana advocacy in prime "cantankerous old guy who doesn‚Äôt give a fuck what anybody thinks" style, he‚Äôs directed a very fine, floating film from Garrison Keillor‚Äôs NPR institution ‚ÄúThe Prairie Home Companion,‚ÄĚ a work that will doubtlessly cause critics to gush adjectives, and will perhaps even move some tickets by virtue of the material‚Äôs cult cache and ‚Äôtween-bait Lindsay Lohan‚Äôs serious-film ‚Äúcoming out.‚ÄĚ It‚Äôs certain Altman won‚Äôt care about the critics, and I imagine the box-office only matters to him inasmuch as it helps the next movie find financing. He likes to keep working, to the extent that it‚Äôs hard to get a good picture of the size and the shape of his filmography‚ÄĒthe multitude of projects, that army of characters. One question that remains consistent in my mind, when sifting through the man from Kansas City‚Äôs oeuvre: ‚ÄúHow‚Äôd anybody ever think to make movies like that?‚ÄĚ

REVERSE SHOT: You had what might be called an apprenticeship period working in industrial films, as a screenwriter, in television; during that period, did you always have the specific idea of ‚Äúmaking art‚ÄĚ through your vocation?

ROBERT ALTMAN: Making films was always my goal. Making entertaining films. You don‚Äôt think about doing something in an artistic way‚ÄĒyou‚Äôre either artistic about it or you‚Äôre not. I don‚Äôt think there‚Äôs any‚Ä¶ I don‚Äôt think you have any choice.

RS: In that sense, do you make any delineation between your film and television work?

RA: It‚Äôs all part of the same book; different chapters.

RS: Is there work you did for television in the fifties and sixties that you‚Äôd like to have more widely available?

RS: Was there a point where working in TV became a constraint?

RA: Well, there‚Äôs always a constraint, because you don‚Äôt have the editing control‚Ä¶ There are commercial restrictions to it‚Ä¶

RS: One of the things that surprises me in watching something as early in your film work as That Cold Day in the Park (1969) is how fully realized your style was even at that point‚ÄĒis that something that had become cogent in the TV work?

RA: That film was a chance to air out things, stylistically, that I hadn‚Äôt had before.

RS: Were you plugged into what was happening in the European art cinema at that point? Was there a drive to make an equivalent American art cinema?

RA: I admired all those films: Bergman, Fellini, Kurosawa, and I thought they were better work than what was being done in America‚Ä¶ But they played to a different audience; that‚Äôs why they were called ‚ÄúArt films.‚ÄĚ

RS: I‚Äôve noticed already in the critical reception to A Prairie Home Companion a tendency to call it a warmer, more humane Robert Altman movie‚Ä¶

RA: If you pay attention to the critics that‚Äôs your problem, ‚Äôcause I don‚Äôt. What they say about it‚ÄĒthey have to express their opinions to an audience that they know in a certain given number of words, and they do it in different ways‚Ä¶ I don‚Äôt think they‚Äôre right, and I don‚Äôt agree with almost any of them, whether they‚Äôre pro or con.

RA: More empathetic than what? It‚Äôs all about death, you know? I don‚Äôt think I‚Äôve ever done a film that has more to do with death as does Prairie, and if that‚Äôs empathetic‚Ä¶

RS: So much of the movie has that elegiac, ‚Äúsaying goodbye‚ÄĚ quality, saying goodbye to people, to outmoded mediums‚Ä¶ Since, in your career, you‚Äôve had the opportunity to see so much change in mass media, do you find yourself looking back with a sense of loss?

RA: No, I don‚Äôt have a sense of loss, and I hope I‚Äôm moving forwards, but I think we‚Äôre wearing out our audiences very quickly. I think already‚Ä¶ Everything is kind of a copy of everything else. That‚Äôs why all these films are getting kind of tepid reviews and recommendations.

RS: Do you keep up with contemporary films to any extent?

RA: No, I‚Äôm aware of their presence in the market, but I don‚Äôt see a lot of them. City of God was the best film I‚Äôve seen lately.

RS: When you talk about this watering down, what do you hold responsible?

RA: Fourteen-year-old boys. That‚Äôs the major audience. I don‚Äôt think all these ‚ÄúX-Man‚ÄĚ pictures are being made for anyone else, do you?

RS: Could you imagine starting your career in this market?

RS: In speaking of dying mediums: is your switch to shooting on HD a permanent move?

RA: That‚Äôs like talking about switching over from horses to motorcars; it‚Äôs switching from propeller airplanes to jets. HD is just a cheaper and easier medium to work in for certain kinds of films. I think it‚Äôs a good move forward. I defy any cinematographer, anybody, to look at Prairie and tell me whether it was shot originally on film or video. I did The Company on HD, and I‚Äôm planning on using it in my next film.

RS: I know Prairie opened at the Fitzgerald in St. Paul, where it was filmed; how was the reaction from the faithful ‚ÄúPrairie Home‚ÄĚ radio audience?

RA: Well, it was great in St. Paul, naturally it went very well. Most of the audience there were people who had been in our crew, our extras; we were there for quite some time making this film, everybody knew us. I wouldn‚Äôt count on the gauge of what happens in St. Paul to be what happens in the rest of the country.

RS: It‚Äôs interesting that there‚Äôs no mention of Lake Wobegon in the film, moving away from what might be expected of a cinematic ‚ÄúPrairie Home Companion‚ÄĚ

RS: In that you had Garrison both acting in the film and you were working from his screenplay, was it unusual practice for you to have a screenwriter so frequently on-set?

RA: I usually hire a screenwriter to be on-set all of the time. On Gosford Park I had the writer with me all the time; in Fool For Love with Sam Shepard, he‚Äôd written the play, and he was in it‚Ä¶ The reality of what‚Äôs written in a screenplay needs changes a lot of the time‚ÄĒit depends on the casting and various elements that change. It isn‚Äôt a frozen thing until it‚Äôs on film and put in a can. Garrison does his own show the same way; he‚Äôs re-writing in the middle of a performance, handing papers to people, keeping the script on him. It‚Äôs a living, growing process.

RA: In the world we live in, everything is political; it‚Äôs only when it gets to become organized politics that it gets to being oppressive and dangerous.

RS: Is it more than an accident that Tommy Lee Jones is a rapacious Texan invading St. Paul, one of America‚Äôs most liberal cities?

RA: It‚Äôs not an accident, no. That was written and constructed and cast and shot with politics in mind.

RS: The advent of DVD has made a much wider selection of your films available to an audience that might not have seen them on initial release. Are there any films of yours that you‚Äôre eager to see re-evaluated?

RA: You know one of the least successful‚ÄĒin terms of audience and income‚ÄĒfilms that I‚Äôve made was McCabe and Mrs. Miller. And you guys, and people out there say, ‚ÄúOh, that‚Äôs a great film blah-blah-blah,‚ÄĚ but it was a big, big failure when it came out‚Ä¶ I guess it was saved by the critics‚Ä¶

RS: Is there anything you think still hasn‚Äôt gotten its due?

RA: In my mind, none of ‚Äėem did. Because I‚Äôm looking at it from my own point of view. Each time I finished a film I thought, ‚ÄúWow, everybody‚Äôs going to want to see this, this is gonna be the biggest film of all time.‚ÄĚ