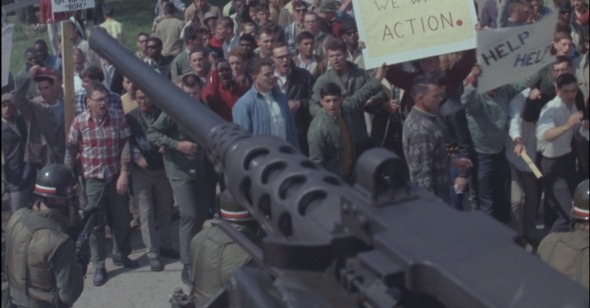 In 1964—a year before the racial uprisings in Los Angeles, Chicago, Newark, and Detroit, among other American cities—an unassuming Canadian English professor named Marshall McLuhan coined the mantra “the medium is the message,” referring to the ways in which electric media, the television in particular, not only shape the content we consume but transform how we view ourselves and others. “Electric speed in bringing all social and political functions together…has heightened human awareness of responsibility to an intense degree,” he wrote in his preface to Understanding Media, “[and] alters the position of the Negro, the teenager, and some other groups. They can no longer be contained, in the political sense of limited association. They are now involved in our lives, as we in theirs, thanks to the electric media.”

One might counter: involved how? Sierra Pettengill’s latest documentary, Riotsville, U.S.A., shares McLuhan’s conviction that media matters, but rejects the utopic assumption that “human awareness of responsibility” might rise as a result. Perhaps more than any other recent documentary that that dares to takea long, hard look at our country’s history of racial subjugation, Riotsville, U.S.A. foregrounds—and visually illustrates—the power of the televised image to seduce, reduce, and betray. Comprised entirely of archival footage and broadcast news, Riotsville, U.S.A. is, on the one hand, about the United States Army’s construction of elaborate model towns of the same name in which acts of civil disorder, and their violent suppression, could be theatrically staged in preparation for the real thing. On the other, it is a film about how racial unrest in all towns was essentially captured and sold to a television public in remarkably similar and unsettling ways.

In the following conversation, Pettengill unpacks what she calls her documentary’s “real intervention” into media representations.

Reverse Shot: In making this film over a period of six years, what led you to rely, visually at least, on exclusively archival materials?

Sierra Pettengill: I primarily make all-archival films without much outside intervention. The goal here was both to contextualize Riotsville historically—how it got funded, what it came out of, what it meant in the moment, what the conversation was around equality—and also to use Riotsville as a metaphor: what it does as a set of images to us in a schematic way.

There are an endless number of deeply fucked-up programs from the American government hat are equally absurd and extreme as Riotsville. I didn’t want to just explore some quirk in American history. I wanted the film to reflect what it felt like to go through the archives and piece things together, and allow the contexts of the news material and the military footage to hold their own. I think a lot about the ways that images in general, in documentary, and particularly archival materials can be used as a shorthand for something else, calling on a viewer’s predispositions or preassociations. And with archival material, you can often get the same repeated tropes. I wanted to show footage that felt brand new, that required a real watching and seeing and thinking and evaluating of what’s in front of you. If you’re gonna make a film about 1968, it better be something reevaluative. The narration in the film, written by Tobi Haslett, feels like a real intervention as well, pointing you throughout the film, not letting the archival images hold their own.

RS: The narration is very poetic—a wonderfully lyric interplay between the script itself, the archival footage, and the editing choices: slow motion, or even the rhythmic blurring of some archival Riotsville imagery correspond to the cadence of the voiceover. How did you determine what kinds of creative interventions to make in terms of aestheticizing this footage?

SP: It was different in different scenarios. As a general rule, I don’t really place much value on pristine images. I’m very influenced by Hito Steyerl and this idea of the “poor image” leaving some sort of clue as to how material travels through various networks, including the internet, but also, in the case of corporate archives, there’s a lot of material in here that’s fair use, and that material comes in at a lower resolution. I have no interest in hiding that. The way that images arrive at us and have been preserved is important to me. Our digital interventions are just taking that and pushing it one step further. Part of it is to remind us that we are in a present tense, manipulating images, looking at them, and that we can intervene in society and in its images. And I don’t mean in a film editing sense. I mean, we are sitting here in 2022, receiving; we are not in some immersive experience locked in a vault.

It’s also about pushing the limits of those images. At some point, you get as close as you can get, and no closer. The last image in the film, in particular, allows for some openness; we can write ourselves into how this issue plays out in the future. In other cases—that stuttering slo-mo footage where the image starts to degrade, where the narration is talking about the dream, fantasy, and nightmare of the carceral state—you’re looking at young soldiers, but you also have to remind yourself that this is not real. This is staged and state-controlled.

RS: I definitely noticed the pixelation of newspaper imagery as one of the ways you literally draw out the point, presenting images of points onscreen and then showing how these points invariably distort.

SP: There was a piece written by Takuma Nakahira, a Japanese photographer in the ’70s, analyzing why we always get the same images of social rupture. The voiceover Tobi wrote speaks to this too. You can get an image of a cop car on fire, but you’re not going to get an image of all the structural factors that led up to that moment. Part of the deep pixelation is to demonstrate how the images are always going to prioritize a certain kind of sensational rupture—that’s what makes for a good picture—and then deliberately denying that, denying the way that images of riots are often now, and historically, used to prove some kind of violence among the Black community.

RS: You also decided to include certain advertisements, like the Gulf fly spray at the Republican National Convention. What motivated your decision to include advertisements at the time? I found them both delightful and disquieting—moments of rupture within otherwise often somber footage.

SP: When you talk about historical documentary, it plays two roles. One is to point out the literal—as in, Gulf funded the RNC. As it progresses, Riotsville is calling attention to sources and funding. You find out who funded [the news show] Public Broadcast Laboratory. You’re seeing that ABC is doing a promo event for a private police tank called The Witchcraft. You have that information to process what you’re seeing; the context matters. But there’s also an affective role the film plays—with the Gulf Oil commercial in particular. It’s not just about outlining a series of historical events and a very tight web of connections; the reality is looser, messier, and more sprawling than that. In that commercial there’s a feeling of dread. It captured this feeling of a larger sickness.

RS: I also noted how the film’s opens with Lyndon Johnson’s televised riot speech in the Academy ratio, as though we are the television audience, and the next shot reveals archival footage of a focus group of diverse Americans watching the same speech on a television. Were you trying to encourage your viewers today to imagine themselves in that position—what it would be like to be exposed exclusively to mass media? Watching this kind of footage back then was much more collective. Everyone was watching the same major networks, whereas now, so much of the footage we have of protest and police brutality is user-generated content.

SP: I think it really depends on the viewer. I don’t want to ascribe my particular intentions to that. I think being aware of yourself as a viewer is an important part of the film, and I wanted to set that up early. Personally, I find that focus group incredible. And it’s not an organic group, though we do think of this time as one where everyone’s gathered around the TV. But this is a staged group. And their reactions were really telling to me. Something I thought about a lot when making the film is what it feels like to live through moments of history, as opposed to how we usually watch a shaped narrative wherein the end feels inevitable. I was trying to get closer to what it actually feels like. Their reactions are not, “Well, that was a momentous moment that will go down in history!” Some of them are like, “I don’t know…didn’t feel like politics.” There’s just a range of feelings and assessments, some more passionate than others. It felt like a more present tense witnessing than I normally see. Usually that LBJ speech would be cut really sexily against images of people on the street and fire and stuff, rather than people not quite sure what to make of it, or how much this matters.

RS: In that focus group, it also was very clear that not all Black viewers, or white viewers, responded the same way to Johnson’s speech. From the very beginning of your film, it was clear that this historical event was not instantaneously polarizing in some spectacular fashion among those of different racial groups, which is often how we perceive these kinds of reactions to speeches today. For me, this was one of many gratifying surprises of the film, chief of which would be how relatively progressive the Kerner Commission was in initially providing directives for how to respond to racial unrest, especially since the panel was composed of moderate white men. I was also shocked that the book published by this government panel flew off the shelves. In the process of making this film, what surprised you the most?

SP: The idea of cultural amnesia was really important to me while making the film. I’d heard of the Kerner Commission, the idea that their book was a best seller was news to me. And that makes me actually very angry. And that was part of the reason we decided to focus on broadcast news and military footage. Riotsville was actually covered in the New York Times; a big chunk of the footage we have in the film of Riotsville was shot by ABC or BBC. It’s soothing to feel like we had no way of knowing about it, that it’s an explosive, recently discovered, classified set of government programs. I think it’s actually much truer to the problems we have now that this is a deliberate act of historical amnesia. There’s a reason we don’t remember this—and the Kerner Commission is not alone. There was also a commission after the Newark riots, called the Hughes Commission, which came to the same conclusion over and over and over again: police brutality tends to spark unrest and the riot recreations are continuing from that premise. They start with someone getting pulled over by the police.

I don’t know if anything really surprised me, but I guess it would be the public nature of what has been remembered and what has been forgotten. Knowing very little about the protests in Liberty City, Miami, outside the 1968 Republican National Convention was another example to me. I don’t want to say it slipped through the cracks; it’s more what’s been tossed aside. I felt like we were watching that process in many ways during the 2020 rebellions as well: watching narratives be reformed.

Editor’s Note: Filmmaker Sierra Pettengill has contributed to Reverse Shot as a writer.