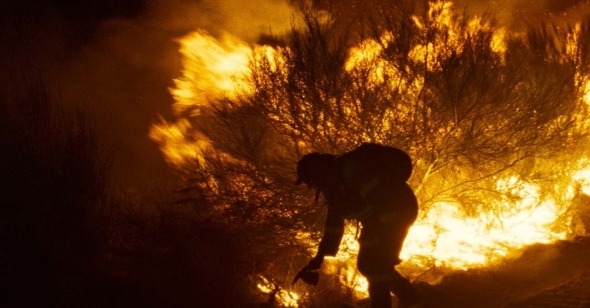 Last Embers:
An Interview with Oliver Laxe
By Conor Williams

Fire Will Come is filmmaker Oliver Laxe‚Äôs third feature‚Äîa gentle and haunting drama that investigates the tormented dynamic between man and nature. The 38-year-old Galician artist spoke to me what feels like an eternity ago, in the early days of the U.S. lockdown amidst the global coronavirus pandemic. The status of his film, which had won the Jury Prize at the 2019 Cannes Film Festival, had been at that point relatively up in the air. Laxe seemed unbothered by this uncertainty while we chatted. An accidental FaceTime call revealed his strikingly handsome face, shielded with sunglasses and a large sunhat, while he ambled around the sunny greenery of his property in the Galician countryside. It was springtime, and Oliver was working with a small team to restore his grandparents‚Äô house.

We spoke with an unhurried contemplation about firefighting, cows, and the state of our environment. Coming amidst a season in which so many fires had transformed the U.S. into something cinematically unreal, however, there was an undeniable urgency lodged somewhere deep in our words. The title of Laxe‚Äôs film is not simply a phrase meant to lure curious viewers. It‚Äôs clear Laxe meant for this film to be a serious warning of the climate catastrophe that we may meet in a matter of decades. [Read the full Reverse Shot review of Fire Will Come.]

In our discussion, Laxe compared the making of his film to that of composing a symphony. There is indeed a musicality of everyday life that emanates from Laxe‚Äôs imagery‚Äîhaving shot Fire Will Come in his hometown, Laxe perhaps found harmony in the voices of his neighbors, like Walter Benjamin recalling the sensorial impacts of the neighborhood of his youth, or Agn√®s Varda documenting the day-to-day business of the bakery on her street. Offering musings at once disarmingly frank and philosophical, the filmmaker ended our conversation wondering whether he would even return to the craft of cinema in the wake of the film‚Äôs virtual release this week. More pressing matters grabbed at him‚Äîlike the protection of our planet.

Reverse Shot: What is it about the physical experience of going to the cinema that is so important to you?

Oliver Laxe: I think there is a mystery that happens between an image and the spectator. The temple of cinema is an experience that you cannot exchange with another, or by watching films at home. The images can‚Äôt penetrate the spectator and be there for a long time. I think it is the responsibility of a filmmaker to make images that will be with the spectator for years. That‚Äôs why we are filmmakers, too, because we were penetrated by some beauty. People who are secluded watching Netflix all day...these poor people. It‚Äôs a torture.

RS: You shot the film in your hometown in Galicia. I can imagine wanting to make a film like this simply to have a reason to celebrate the natural beauty of those landscapes.

OL: I mean, landscape is a word I always have a problem with. I think, with ‚Äúlandscape,‚Äù you have a dialectical relation between yourself and the nature that is in front of you. The challenge is to transcend this dialectic and to dissolve yourself in nature and in the values of nature and the time of nature.

RS: The two leads, Amador and Benedicta, are played non-actors who bear the same names as their characters. Their relationship feels so truly realized. How did you cast these two?

OL: With passion. [Laughs] I‚Äôm a lucky man. I always find beautiful people. In my previous films, it was the same thing. I know the people here very well. Those archetypes‚ÄîI really know them. For example, my family had a lot of Benedictas. And I have some cousins that have the same sensitivity as Amador. I‚Äôm talking about the characters, not about the [actors]. I try to dissolve the border between the character and the person. Sometimes I say that when we work with a non-professional actor, you start from zero. And sometimes, with an actor, you start from minus fifty. I think that a non-professional actor has a better chance of being connected with their essence. I think only a few actors are connected with their essence. I did the film in the place where my mother was born. So to make a film with actors that don‚Äôt even know how to speak Galician, it could be ridiculous. I know the people. I know the neighbors. I know the way they talk to the cows. I know the way they cut their bread. I know the way they walk. And always, obviously, I adapt myself to reality. I have a script, I have an intention, but I abandon myself to reality.

RS: There‚Äôs one moment in the film that I found to be exceptionally poignant, the shot of Amador‚Äôs cow riding in the back of a veterinarian‚Äôs truck, set to the Leonard Cohen song ‚ÄúSuzanne.‚Äù How did that moment come to you?

OL: It‚Äôs very difficult to know...for me it was a cherry on the cake, that shot. I had a lot of fears putting that song in the script and in the film. It could be too sentimental. Too easy. I mean, you know, ‚ÄúSuzanne‚Äù is a very well-known song and it‚Äôs very difficult to work in cinema with a song that is very popular, because for each spectator a song means something. It‚Äôs very difficult to decontextualize a popular song. So we knew when we were editing the film that some spectators would have problems in the beginning of that scene, like, ‚ÄúOof, where are we going?‚Äù (Laughs) But after, when we have the shot of the cow, we supposed that at some point, the spectator...surrenders. It‚Äôs one minute of a cow!

RS: But that‚Äôs why it‚Äôs so beautiful. You realize you‚Äôre just looking at a cow and just wondering what a cow thinks of ‚ÄúSuzanne.‚Äù

OL: It‚Äôs a sequence that has different emotional layers that are well balanced. I think. I mean, I can say that now because I know the reaction all over the world. But before, having the screening at Cannes, we were afraid of a cynical reaction.

RS: I understand that you filmed a real forest fire. Can you tell me about what the process of shooting that was like?

OL: Yeah, we had to learn to be firefighters. So we had to start going to fires, first during the day because it‚Äôs more secure, to get accustomed to the smoke. And now with climate change, fires are more improvisational and dangerous. We went to the fires slowly, and then we went to the night fires, which are even more dangerous, because you can lose yourself and you can fall. It‚Äôs risky too. So yeah, after about a year, all the crew and the actors had the same training. I mean, now, if it doesn‚Äôt work for me as a filmmaker I can be a firefighter (Laughs).

RS: You talked about being anxious putting a popular song in a film...but you‚Äôre fighting a fire!

OL: That gives it some balance. We talked about the film like a kind of symphony, or something with operatic movements. We knew that the start was very powerful, with that scene with the bulldozers eating a forest. We supposed, with all the energy of that scene, we could have a second movement with Amador and Benedicta, something more slow. So that the spectator will have the energy from the first movement, and that second movement, to have that third movement with the fire.

RS: You mentioned climate change. The fire that you filmed at the end struck me as so viscerally real, because at the time I saw the film, the Amazon rainforest was blazing, largely due to deforestation that increased under the Bolsonaro regime. Your film doesn‚Äôt cast judgment on its characters, but it does make sure to show the damage done by fires, and this fragile relationship between man and nature. Do you think there‚Äôs a chance for humans to heal that relationship?

OL: We‚Äôve already had a lot of chances. I pray every day to have another chance. Because I think that we could make something good. It‚Äôs very difficult to protect ourselves from the future. We‚Äôre going to change ourselves very quickly, I think, humans are. I‚Äôm doing that too. I have taken up a new project in the region where we shot the film. It‚Äôs a kind of pedagogical farm. So right now, today, I‚Äôm visiting farms (Laughs).

RS: What is this project?

OL: I want to develop this place culturally and economically. It‚Äôs sort of a method of farming where animals have freedom. It‚Äôs a way to conserve and protect, to make sure the forests aren‚Äôt so combustible. So, I don‚Äôt know how many more films I am going to do. I mean, my body‚Äôs asking me for that. My soul. I‚Äôm abandoning myself for that. Maybe the film was just an excuse to be here. The first step for something bigger.