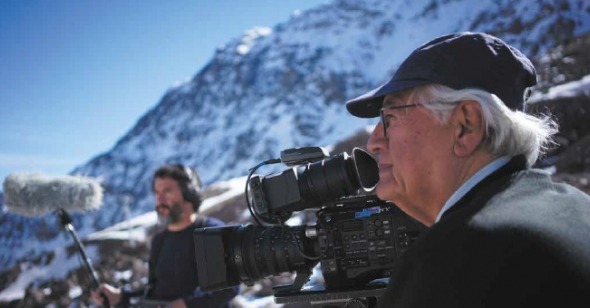 Closed Circle:
An Interview with Patricio Guzmán
By Daniel Witkin

Since he started working over a half-century ago, Patricio Guzmán has had one of world cinema’s most extraordinary and unlikely careers. His three-part masterwork, The Battle of Chile (1975–79), smuggled out of the country in the wake of the coup that saw democratically elected leftist president Salvador Allende murdered and supplanted by military dictator and neoliberal pioneer Augusto Pinochet, would alone be enough to guarantee the director a place in film history. Battle is the rarest of birds: a comprehensive history composed without input from the “winners.” Like Claude Lanzmann’s Shoah, it’s not only among the greatest of documentary films—it also constitutes a necessary piece of the historical record writ-large.

Now, with The Cordillera of Dreams, Guzman has capped off a new, decade-spanning trilogy that began with Nostalgia for the Light (2010) and continued with The Pearl Button (2015). Quieter and more inwardly focused than their predecessors, Guzmán’s latter-day films show that the rage of his previous works are coalesced into a calm, resolute probing for personal and historical truth. Interweaving explorations of Chile’s landscape with interrogations of its national memory, they are at once free-associative and intricately constructed, with Cordillera traveling from the heights of the titular mountain range to the corporatist Santiago skyscraper from which Pinochet and his economic henchmen carried out their experiments and to what remains of the director’s childhood home. On the occasion of the film’s New York release, I had the good fortune to speak with the director through an interpreter, discussing his films, his country, and his distinct spoken voice.

Reverse Shot: First off, congratulations on completing your trilogy. I’d like to talk a bit about how the idea of the trilogy came to be. Were you always intending to do a series of films, or did it come about more on its own?

Patricio Guzmán: When I made the first one, I basically knew nothing. I didn’t have a clear picture of where I was going. It was only when I realized that, after filming the desert, I had to do the seas and the cordillera. The principle was to cover all of the natural borders of Chile.

RS: How did you choose these three particular landscapes as the structure for the films?

PG: The geography of Chile is very simple. On one side, you have the sea; and on the other you have the Cordillera mountains; and down in the South you have the poles and the icebergs. So Chile is a very enclosed country. Living in Chile you feel completely removed from everywhere else. You have 7000 kilometers of Chile in front of you, so the mountains surround the country and cut it off from the rest of the world. Towards the South, the land disintegrates into these small islands, so you really begin to feel the end of the continent. So all of these things really amount to a feeling of solitude.

RS: Do you think that Chile has a different relationship with its environment than other countries do?

PG: Yes, I would say it’s this concrete and profound distance, that feeling of being apart. However, Chileans don’t really talk about that—they think they’re normal. They think they’re Europeans or North Americans. But I do think that it’s a country of isolated and distant beings. It feels like a country that’s never been explored. Even though we have Chilean modernism and Santiago is a very cosmopolitan city, there is a Chilean isolation. I know that this is subjective and there’s no way I can prove it, but that’s how I feel.

RS: I was moved by the end of Cordillera, which harkens back to the beginning of the trilogy. How did the broader series shape your consideration of the individual films? Was making Cordillera of Dreams a different experience than Nostalgia for the Light?

PG: What changed in all three was my perspective on Chile. At the beginning, I saw Chile more as a geographical accident, with its mountains, the desert, the plains. But as my perspective shifted, I started to focus more on the people’s mentality. I’ve made films about the coup d’état, about Pinochet, but this time I focused more on the people themselves, so that changed the film’s point of view. Of course, I still addressed Pinochet and the coup, but it was more from a bottom-up perspective. So in this sense it’s a very different experience from Nostalgia or The Pearl Button.

RS: In Cordillera, you point out that under the neoliberal regime instituted by Pinochet and his team of U.S.-trained economists, as much as 80 percent of the country fell into private hands. Do you think that this has changed the way Chileans interact with the landscape?

PG: I think that the concept of privatization does not feel real. When you see the Cordillera, when you see the mountains, when you see the sea, you think of it as yours. It’s the same thing with your country: you see your country and you think it’s yours. So the concept of property is not present when you’re looking at this landscape. The contracts and the deeds to the lands are something abstract. You think the land is yours forever, so there’s a contradiction between your own perception and the real economic forces.

RS: I find there to be something very distinct about the narration in your films, and part of this I think has to do with the sound of your spoken voice. Can you tell me a bit about how you approach your narration? Do you view it as a sort of performance?

PG: I like to talk about what I’ve filmed, so I do the narration to create a dialogue. The voice is comprehensible. It’s simple, it’s clear, so it’s a small explanation of what we’re seeing and what we’re about to see. More than anything else, it’s friendly dialogue with the audience, with the person who’s watching the film.

RS: Cordillera of Dreams also contains a particularly striking use of digital effects, which I believe is something you’ve done throughout the trilogy. Can you talk a bit about how you came to use these technologies?

PG: The effects are a part of the narration, and the narration is what motivates me to use these effects. For example, in the desert I used the effects to make the desert appear bigger. In the South, I wanted to relive the existence of the communities who lived there for forever, and to show also the thousands of miles of channels, rivers, and mountains, so that you can visualize their full scope. In Cordillera, specifically, I used them to try to understand the meaning of the house where I grew up. I wanted to reconstruct it. So in the type of subjective documentary cinema that I make, I use these effects to relive reality, and to explain what I think, what goes through my head. I think it’s interesting to make those reconstructions, but it’s a very subtle element because I want to avoid the film turning into mere animation. You have to keep the documentary sober. These reconstructions are about your first imagination of something, not the result of thinking about it. It’s the primal feeling of encountering that portrait of your parents, but it’s not fantasy. So it’s a primal imagination.

RS: There’s certainly a very deep vein of nostalgia in your films, which is an emotion I’d like to ask you about. I think that the idea of nostalgia can have very conservative or even reactionary connotations—as you probably know, the American right is currently fighting a crusade to “make America great again”—but your work shows it to be more complex. Do you think that nostalgia can also be a progressive or radical force?

PG: I think that all elements can be positive or negative depending on their intended use. You can make a violent film in a progressive way, or a nostalgic film in which you remember things fondly. I think that you can look backwards in order to look forward, as a way of talking about the future. So nostalgia and violence are elements with no particular political color. It depends on how you use them—things can be right or left, progressive or reactionary—different sides come out depending on how they’re used. I try to use them in an open way, to signal the future. I want to be a friend of the future, a friend of what’s to come. I think that nostalgia and memory in particular is a way to prolong life. Prolonging life, in its best sense, is what makes me a filmmaker and a writer. One needs to talk to make the most of the future.

RS: This is perhaps a bit broad, but it seems like we’re entering what might be called “interesting times,” with youth-led political movements and protests breaking out all over the globe. I’m curious if the present moment reminds you at all of that period in the ’60s and ’70s that formed your art and politics.

PG: I do think that there’s a connection between all of the problems and all of the protests that are happening in different parts of the world, although I don’t feel able to continue that analysis much further because I don’t know all of the facts locally. But I do know that the world wakes up to the same noise, it wakes up to the same melody. Of course, what’s happening in Chile is related to what’s going on in many other places. And I do see a parallel with the protests of the ’60s. It seems the big circle of time is closing. Like in the ’60s, we’re starting to see a lot of stuff that wasn’t previously put out there, a lot of feelings that were not expressed, lots of heartbeats that were not heard. Life is emerging after many years of inertia and pushback. We’ve been silenced for a long time, and now all of that is coming out.