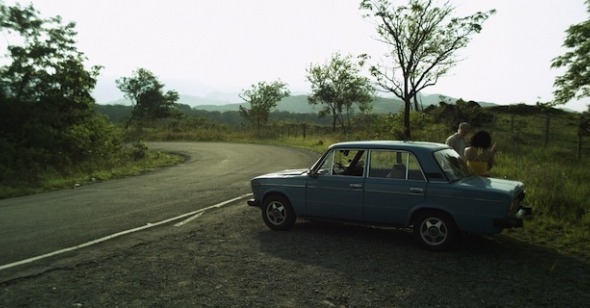 Dispatch from the International Film Festival Panama
By Kiva Reardon

On the east of the Bay of Panama, skyscrapers—from condos to the yonic Trump tower—are being built at a ferocious rate, creating a vista that resembles that of Miami or Toronto. To the west is the Casco Viejo, recently named a UNESCO site, where the area’s French colonial heritage is being preserved (or beautified for tourists, depending on whom you talk to) and which in part recalls New Orleans, though it is steeped in a level of poverty first-world nations do not know. Facing each other from across the bay, the two areas are connected by freeways constantly humming with traffic. Navigating these two realities, IFFP positions itself as a way to declare the nation to the world.

This year marked the first International Film Festival Panama, which programmed films from Latin and North America, as well as those by indigenous directors. Its sole world premiere was opening-night film Ruta de la Luna, a first-time feature by a Panamanian director. Given this, the enthusiasm for the film was merited, though Ruta itself was lacking. Directed by Juan Sebastian Jacome, the film is not worth lambasting and is technically fine (and one made with meager means), though there are myriad problems. Centering on the relationship between a reclusive Albino man, Tito, and his aging machismo father, Cesar, Ruta combines the tropes of a father and son tale with that of the road movie to mediocre result. Jacome displays a keen cinematic eye, capturing moments of natural beauty (the rainforest at dawn; the view from a car navigating isolated roads that weave through a lush green countryside) and exhibits a distinct mise-en-scène of muted colors that reflects the subdued conflict between father and son. But the film suffers from an affected script, too reliant on character traits we have encountered before—the angry father, the quiet son, the quirky female companion that unites the two and then makes herself scarce. While not a failure, more than anything Ruta felt unambitious which made for a disappointing opener given the festival’s high aspirations.

Santiago Mitre’s The Student (playing in the First Time Directors program alongside Ruta) focuses on a young student, Roque (Esteban Lamothe), who moves to Buenos Aires to attend university and becomes involved in the complex world of university politics. Steeped in Argentine history, The Student manages to create an engaging story from what would appear to be entirely banal on the surface. Shot with a handheld aesthetic that immerses the viewer in a very specific and insular world, Mitre’s film maintains a kinetic pace with deft editing and scoring. The conclusion, however, disappoints; crescendoing to a meeting between Roque and the man he once idolized, the film ends by cutting to black, which suggests too neat a wrap-up given the film’s complexities.

Also of note in the First Time Directors section was Kenya Márquez’s Fecha de caducidad. Set in contemporary Mexico, the film weaves together three perspectives on the same story: the disappearance of a young man, Osvaldo. Following his mother, Ramona, her new neighbor, Mariana, and Genaro, a bizarre forensic assistant, the three stories are blended together to create a multifaceted narrative. While this sounds like yet another multiple narrative feature with echoes of Alejandro González Iñárritu’s Babel or Paul Haggis’s Crash, Márquez manipulates such expectations formally, constructing the pacing of each story to reflect the perspectives of each character. Opening from the point of view of the octogenarian mother, Ramona, the film initially moves in an appropriately glacial manner, at times frustratingly so. As we shift to Mariana and Genaro, however, the rhythm changes to reflect the characters’ views, like an experimental Rashomon.

The International and Ibero-American Panorama (the festival’s growing pains reveal themselves in the lack of more compelling program titles) featured well-known films, such as the Dardennes’ The Kid with the Bike and João Canijo’s Blood of My Blood, respectively. As all of the films had already premiered at larger festivals, these programs felt like an opportunity for local critics to play catch-up, though they did offer a wider selection of films to the general population in a market dominated by Hollywood. The Panamanian program, “Films from the Isthmus,” does merit discussion. Offering a mixture of both fiction and documentary features, the section ranged from newer selections (Abner Benaim’s Chance) to those that have already played the festival circuit (IFFP’s co-director Pituka Ortega-Heilbron’s Los puños de una nación).

Of these films, two stood out. The first, the documentary Curundú (by Ana Endara Mislov), was shot on a digital camcorder, yet its sub-par visual quality lends itself to the film’s politics: resisting the aestheticization and gentrification that comes along with rapid modernization. Set in the poverty and violence-stricken neighborhood that gives the film its title, the documentary follows Kenneth, a jack-of-all-trades and lifetime resident of Curundú, who has found his calling as the local photographer, taking family portraits. The film incorporates his photos, which feel like they’re being employed less like frozen sentimental moments than as an informal form of archiving. As the community is increasingly encroached upon by condos, when Kenneth’s photos are displayed on screen they halt time, forcing the viewer to contemplate who is being left behind in the race between what the film calls “the two Panamas.”

In a similar vein is Burwa dii Ebo. Directed by Vero Bollow and the Igar Yala Collective (consisting of youth from the Guna community), the film alternates between the saccharine and the genuinely tender, telling the story of two indigenous teens who are attempting to negotiate their place in modern Panamanian society. While overall Burwa dii Ebo is not an accomplished film—its well-composed shots of Panama’s natural beauty put at risk by a rabid tourist industry are bogged down by its stilted acting and simple script—it remains a noble failure. The aim of the film, like Curundú, is to give voice and visibility to marginalized segments of the population. This is perhaps the best thing to take away from the festival. For all IFFP’s red carpets and emphasis on the emergence of Panama as a cultural force, its choice to include these films speaks to a burgeoning interest in developing a cinematic culture.