Outer Wilds and the Time-Loop Game 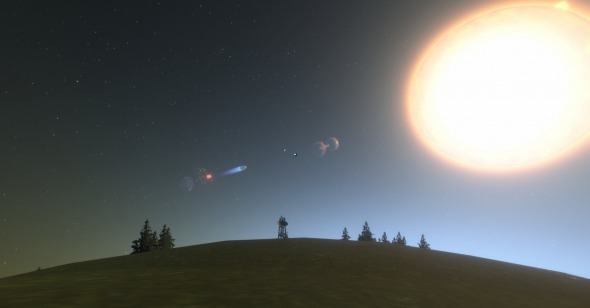 And the Worlds Go Round:
Dan Schindel on Outer Wilds and the Art of the Time-Loop Video Game

Many video games are designed to conjure an elaborate open world. Outer Wilds offers worlds, plural—a whole solar system, in fact. The sun and its planets and moons are much smaller than our own, their scale almost making the system a playable diorama. You can circumnavigate your home planet, Timber Hearth, by foot in a few minutes. Yet this is a living, believable space. Developers Mobius Digital are not content to merely have events happening according to scripts and the planets moving on rails. The game operates according to real-world physics, with every body, both personal and planetary, interacting via accurately simulated gravity. If the system were to continue operating without interruption, the planets would eventually drift apart. Within this setting, Mobius offers one of the most intellectually and interactively challenging takes on the “time loop” game, an increasingly popular format.

Scattered about the system are the ruins of a long-extinct civilization, the Nomai. Nearly every moon and planet bears a structure of unknown purpose they left behind and a host of their texts. You play Outer Wilds as a four-eyed Hearthian, the system’s current sapient species, whose society can best be summarized as a perpetual sleepaway camp. You are the latest recruit for Outer Wilds Ventures, Timber Hearth’s charmingly ramshackle space program (one astronaut is noted as the first to be “intentionally” sent into space), which sends you skyward in a ship made of wood and sheet metal, further underlining the game’s vibe as a space-obsessed child’s imagination come to life. You’re equipped with a new translator tool which can make the Nomai’s writing understandable, allowing you to figure out the intention behind their various ruins. Except you aren’t long into this voyage before the sun goes supernova, destroying everything and everyone… whereupon you wake up 22 minutes prior, with the clock counting down to it all happening over again.

Outer Wilds is but one of a number of recent games built around time loops. These games boast diverse stories, genres, budgets, and play styles, but all share the same central conceit: when the player character dies, when a certain amount of time elapses, or if other specific events occur, the world is snapped back to a prior moment in time, everything within it reset. Players can live out their own versions of Groundhog Day, Edge of Tomorrow, Happy Death Day, etc. Such games require a more attentive engagement with cause and effect. If the world is operating on clockwork and the only major variable is what you choose to do, what happens if you tell someone a secret, or activate a machine that would otherwise lay dormant?

Calling a game “a time loop game” may sound redundant, like calling a film “a visual motion picture.” My earlier description of the conceit applies to nearly every game ever made (with some notable exceptions, such as roguelikes Spelunky or The Binding of Isaac, which stress a “no do-overs” approach and make you start from scratch if you mess up). That is the essence of the near-omnipresent game over/restart function. Mario dies, but you can return to the moment before that happened and try again. The “gameplay loop”—how someone learns to play through repetition and reinforcement—is a core element of video game design. It is more accurate to say that the titles forming this recent trend have diegetic time loops, ones built into their narratives and acknowledged by the characters, with the temporally unmoored antics explained by malfunctioning time machines, meddling gods, or simple mental illness. These games range from The Sexy Brutale (2017, a puzzle murder mystery) to Elsinore (2019, a point-and-click retelling of Hamlet from Ophelia’s point of view) to 12 Minutes (2021, a top-down locked room mystery). Not one but two high-profile shooters released in 2021, Returnal and Deathloop, took advantage of the PlayStation 5’s flashy new capabilities for even more immersive time loop antics. Outer Wilds’ meticulously modeled diorama solar system offers the perfect sandbox for in-depth experimentation with the format.

Outer Wilds’ simulation of gravity and celestial movement forces the player to adjust to an unexpected learning curve of flight and motion. You cannot merely point your spaceship at a destination and get there via a straight line; try it and your target will move out of your way. You must think three-dimensionally in a way games seldom ask you to, compensating for momentum, inertia, the relative positions of yourself and other objects, and more. This stellar dance reinforces the feeling that this universe spins onward heedless of your character’s actions, rather than merely being a playground for you as a player. This sense was very vividly illustrated on my first playthrough, when I trusted my ship’s autopilot to take me to a planet and I then got smashed by a comet. Within the diegetic time loop of the setting, the ludonarrative loop of actually interacting with the game consists of learning as much as one can about the solar system on each 22-minute go-around. If you want to fully explore Brittle Hollow, you must do so early in the loop before the planet collapses into the black hole at its core. Meanwhile, sand flows from Ash Twin, exposing buildings buried under its initially featureless surface, and that sand fills up the caverns of neighbor Ember Twin.

Directly integrating the gameplay loop into a story yields a variety of opportunities. In Returnal, the protagonist’s endless battle to escape a hostile time-loop-bound planet symbolizes her guilt over the death of her child. In 12 Minutes, the many iterations of a home invasion scenario are a way for the player character to work through his denial over a recent revelation about his family history. In Elsinore, Ophelia’s attempts to evade her death make for an appropriately Shakespearean meditation on fate. The Forgotten City (another 2021 release) lets players test the limits of the laws that govern the titular community, addressing issues of choice and morality. In perhaps the very best time loop game, 2000’s The Legend of Zelda: Majora’s Mask, you meet a large cast of characters who are, in one way or another, facing down the end of their own world, in the form of a moon about to impact the land. In both theme and cosmic iconography, it presages Outer Wilds.

But even if some games don’t thematically justify their use of repeating time (2018’s Minit could easily have been a more traditional game that didn’t acknowledge the life/death cycle), the framework highlights and encourages active consideration of the role that iteration and repetition have in play. The time loop is a frequent plot device across different mediums, but this experiential aspect gives games a unique advantage for giving this idea meaning.

Outer Wilds takes full advantage of this, exploring futility and the usefulness of gathering knowledge on a grand scale. Each loop ends along with the universe itself, regardless of what you do. Again and again, you will see the sun swell to a red giant and then collapse into a blue surge of annihilating energy, and you can only watch. You’ll likely experience this cosmic nightmare 40 to 70 times, possibly more. The game’s writers know the player will instinctually embark on their quest with the expectation that it will lead them on a path to save the system. At first this seems to be the case; reading Nomai inscriptions reveals that some of their ruins are complex machines that use the energy of a supernova to power a time travel project. So, if you stop that machine, you stop the loop and the death of the sun, right? Except it’s gradually revealed that things are the other way around; the sun is going nova on its own, which has triggered the machine. The universe is experiencing its heat death. There is no stopping it.

Against the prospect of a dying universe, what meaning, what purpose can we glean from our actions? The never-ending loop is a grandiose exemplification of the dilemma of life itself. In this way Outer Wilds turns the satisfying Skinner-box-like nature of iteration and successful repetition against you. It is also how the game’s philosophy departs from the likes of Majora’s Mask, where after enough go-arounds it is possible to save the day. On my first playthrough, when I figured out that I couldn’t help my friends, it made the loneliness of flying through the void even more acute. “So, what now?” was the unnerving thought, something every player of the game must grapple with, occasioning a shift in both priority and perspective.

These ideas are further emphasized in Echoes of the Eye, a packet of downloadable content released in 2021 which adds a new area to the solar system: the Stranger, a derelict space station built by a different extinct race that looks like a cross between owls and deer. At least, they are physically extinct. The unnamed beings still exist in a virtual reality maintained by the station. Exploring both the station and this virtual world, you learn that the inhabitants of the Stranger were drawn to the solar system by the mysterious “Eye of the Universe,” an entity somehow older than the universe itself. The Eye, you learn, is a giant quantum object, a source of unlimited potential. But to interact with it would destroy the universe and reset a new one (that this has happened before is why it is older than the current universe). Horrified by the prospect of their demise, the Stranger’s inhabitants retreated to their virtual existence, trying to use high technology to defy the natural order of death and entropy. Within the broader game, then, this is a story about a simulation within a simulation, and a different sort of subversion of linear time within the looping time the player experiences. Through the example of the Stranger, you see the futility of fighting the inevitable.

You complete Outer Wilds by following the example of the Nomai, who also detected the signal of the Eye but were undaunted by the prospect of approaching it. Along with unraveling the mysteries of the solar system, the Nomai inscriptions reveal a culture dedicated to peace and learning. Stranded in the solar system when their ship was damaged, the group became more concerned with solving the mystery of the Eye than escape, in the meantime making a home for themselves on several planets. They took pains to protect the evolutionary ancestors of the Hearthians. They model a compassionate, curious attitude toward life and the universe. Withno traditional “solution” to the dilemma posed by the impending supernova, the only way out of the time loop seems to be seeing the Nomai’s project through.

Once you reach the Eye, the game borrows heavily from Kubrick’s 2001: A Space Odyssey. The universe will still end, but you now exist in a quantum state, having escaped looping time for a place without time as we understand it. The clockwork solar system is replaced with symbolic spaces and figurative encounters, the 22-minute timer gone. Instead of 2001’s ornate rooms, you experience the Eye as a dark forest lit by a single bonfire. Concluding the game involves reaching out to various characters you have met in the solar system, now present in the forest: they are possibly manifestations of the Eye assuming friendly forms, or maybe they are somehow the actual beings. Riding out the end of everything takes the form of playing a song with your friends. After freeing you of the meaningless immortality of a time loop, Outer Wilds lets you drift peacefully into the dark.