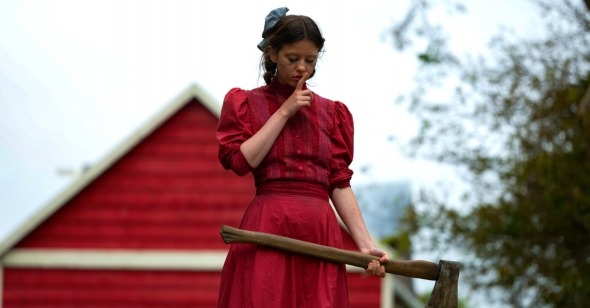 Love Me, Love Me, Say That You Love Me
By Greg Cwik

"It is a sad thing to want for happiness, but it is a terrible thing to see another groping about blindly for it, when it is almost within the grasp." —Sister Carrie, Theodore Dreiser

X, Ti West's libidinous and lurid story about a gaggle of pornographers who get killed off by a sad, sexually frustrated old lady and her impotent husband, released earlier this year, opens with a patient creeping push out of the caliginous shadows of a barn towards a big old country house where our elderly antagonists live. The barn doors on either side of the frame give the composition the look of an old school academy aspect ratio, the frame slowly widening as the camera moves out of the dark and rests upon the house, which has seen better days. This shot speaks to the film's retro style and its intimacy, to the way West marries the old and the new. This is a small film, which is not to say unambitious; its concerns are human, its longing for flesh and blood oddly relatable, all the violence the results of its killers looking back on an ordinary, unfulfilling life whose end draws near.

Pearl, West's prequel to X, begins with a similar shot, but wider, the light leaking in through the crevices of the barn suggesting something like hope rather than the stygian sorrow of the previous film. The camera glides forward and settles on the same house, but now it's more inviting, more homely. It's 1918, and the Spanish Flu has ravaged the Texas countryside; fear of the germ pervades every home, and people are forced to wear masks when they dare to go out in public. Mia Goth reprises her role as Pearl, now a young woman, and the film belongs to her. She's in every scene, and West, who directed, produced, edited, and co-wrote with Goth, lets the camera luxuriate in the lovely glow of Pearl's face as she fantasizes gleefully about the life she wants, her smile wide and wondrous. Yet there’s a deranged sadness that twists her face when she struggles to reconcile with her quotidian existence and her growing penchant for the perverse. Pearl lives on a farm, and we know that, despite her insistence that she will escape this drab, dreary life, she will spend the rest of her life there, die there, like her mother, whom she swore she would never become.

It's this mother (Tandi Wright), a bitter, vindictive German immigrant, who inspires Pearl's inner agony. Penurious and self-pitying—traits that Pearl has inherited—she berates her daughter for insolence, for wanting to leave the farm and have her own life, her own identity, while the cantankerous housewife has to spend her remaining years caring for her husband (Matthew Sunderland), a catatonic flu victim whom Pearl has to regularly feed spoonfuls of morphine. The old man and the young girl are both burdens to her, and she is not reluctant to admit it. For her one reprieve, Pearl likes to take a glug of the powerful palliative while basking in the comforting darkness of the local movie theater, watching musicals with gleamy-eyed ardor as the chorus line of young girls dance, kick their legs with simpatico salaciousness, gesticulate grandly at 24 frames-per-second. These flickering images call out to Pearl, suffuse her troubled head with romantic notions. Pearl has dreams. She's special, she tells the cow, her most loyal friend; she's gonna be a star. It's hard to fault her—what young person hasn't felt the allure of such delusions of grandeur? Who hasn't wanted to escape the crestfallen squeeze of tedium and mundanity and wanted oh-so-badly to be somebody—to matter? Poor Pearl doesn't realize that it's these ordinary aspirations that make her just like everyone else, and there's nothing she could possibly want less. Just like all of us, she succumbs to the illusion—false but necessary—of her own significance. Every time she smiles, every time she professes her dreams with such certainty, it hurts.

The theater's suave projectionist (David Corenswet), rocking suspenders and an impeccable side part, the hint of an old-timey mustache sitting just above lovely lips, entices Pearl, who just wants to get away, go anywhere, with his geniality, an affable gentlemanliness that soon gives way to a lecherous leer and promises of a romantic future in more edified surroundings. He tells her she's pretty, tells her she could be a star, which is just what she wants to hear. He shows her A Free Ride, a real vintage stag film from 1915 that he claims to have acquired in France, and tells her, oh-so-sweetly, that they can abscond to Europe together and she could star in nudie flicks and finally be famous. Though Pearl has a husband, Howard (her murderous consort with the bum ticker in X), who's off fighting in the Great War when he could have gotten a doctor to testify to his unsuitability and kept him home with his wife, she's taken with this young man, who gives her the attention she craves. Howard's decision to go off has left Pearl frustrated and lonely. But when Pearl shows the handsome projectionist who she really is, revealing the deranged inclinations that she is just starting to acknowledge herself—her neediness, her proclivity for violence, her dire deliriousness—he gets frightened, just like her mother said would happen. So, she shoves a pitchfork into his gut. It's the only way to solve her problems that she can think of, and once she gets going, there's no stopping her.

Formally, Pearl is West's most elegant film, with careful, considered, yet modest compositions and smooth camera movements. It was shot by West's regular DP Eliot Rockett, and the pair smartly use the whole wide frame, placing Pearl in the periphery of many shots with the farm consuming the rest, the countryside like a romantic painting spread over the background. The music, by the prolific Tyler Bates and Tim Williams, is day-dream swoony then sinister, veering from gee-golly grand to menacing with lucid fluidity. Like all of West's films, Pearl takes its time getting to the horror, and the audience is forced to sit in exquisite suspense waiting for the bloodshed to commence, even rooting for Pearl to get to the killing already; but there are some sluggardly sections that suck the momentum from the story, meandering conversations that could use some tightening. Late in the film, there's one of those long, static close-ups, maybe six or seven minutes, of Goth delivering a monologue to her sister-in-law; it's supposed to be the emotional apogee of the film, a chance for showy acting, the inevitable confession, and Goth does what she can, but there's nothing profound revealed here, nothing incisive or beguiling in the circuitous and plain-spoken language. Thankfully, the scene is quickly followed by a murder captured in a bravura long take, which is then immediately followed by a sequence that would make De Palma squeal, a bravado use of split screen that details Pearl disposing of a body and arranging a grotesque dinner table side-by-side. The dual images eloquently, eerily meld into mirrors of each other, blood flowing, maggots feasting on a rancid pig—it's a demented, hallucinatory kind of Rorschach, part reflective of the film's, as well as its predecessor's fascination with duality, with Sisyphean futility. Sitting there with a charred cadaver and a whey-faced, sallow-skinned husk of a man, Pearl has her first pleasant meal in a long time.

Pearl isn't so much a slasher, like X, with its echoes of Hooper and Craven, as it is a psychosexual melodrama, a kind of Whatever Happened to Baby Pearl? Despite stabbings, slashings, and a dismemberment, the throbbing heart of the film is Goth's doomed dreamer, the glint in her eyes when she talks about the success she so richly deserves, and the way her face contorts into an altogether different kind of expression when she opens up about the darkness roiling inside of her. (“I'm worried there may be something wrong with me,” she confesses.) X is a sordid affair, hot and sweaty and sticky; Pearl is prettier, with lush colors, verdant grass and looming trees and wisps of clouds in the sky. Pearl is told entirely from the young woman's gaze; its comely aesthetic, the sense of grandiosity even in simple shots and modest action, reflects her grand hopes for something better, something beautiful. Nowhere is this more evident than in a virtuosic scene in which she dances for a panel of judges on a stage in a crimson dress; the curtain rises on an oneiric World War I scene, backup dancers join her, and she holds her arms out cruciform, twirling and bending, with a smile as vast as the flaxen fields that enfold her home. It's lovely and tragic.

Pearl isn't as overtly lubricious as you might think, save for one wonderfully outlandish scene of the sad young thing dry-humping a scarecrow surrounded by flaxen fields of corn undulating in the gentle rural breeze, her orgasmic moans echoing across the flatness, scattering birds and shaking the bright blue sky. But sexual anxiety simmers under every scene, with Howard, whose impotence fuels much of X's tension, absent and unable to love her intimately, physically. Her mother insinuates that she, too, is sexually frustrated, saying that she wants to be a wife, not a mother, and her husband, in his condition, can never really love her again. That's what Pearl wants most of all: love, and not just the love of a partner or a parent, but the love of fans, the love of the limelight. She wants to be appreciated, praised. Instead, she ends up a serial killer, and not even a notorious one because she's so good at getting away with it. That, in the end, is the great tragedy of Pearl's life: she finds something she's good at, and only a handful of sorry souls will ever even know.