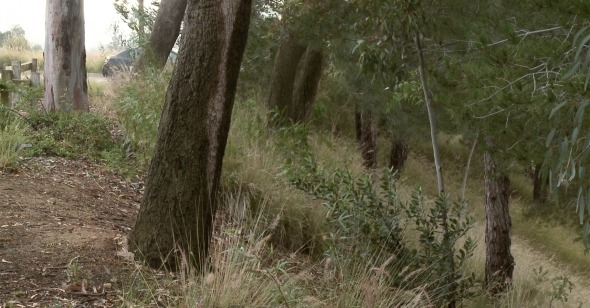 Wait for It
Forrest Cardamenis on Maggie’s Farm

Maggie’s Farm plays Saturday, July 31 at Museum of the Moving Image as part of First Look 20/21.

I was drawn at once to James Benning’s Maggie’s Farm because of what it promised in the title (Bob Dylan music), but the film kept my attention with how it misdirected (the Dylan song we hear in Maggie’s Farm is “Girl from the North Country,” not “Maggie’s Farm”). A little later we hear Linda Ronstadt’s “Blue Bayou” over a shot of the greenish-gray side of a building and its sliding metal door, and in the penultimate shot, of a garbage area behind a building, we hear the entire performance of “The Star-Spangled Banner” preceding a baseball game, as well as the radio play-by-play. Considering that Benning once co-directed a road-trip film entitled The United States of America on occasion of the nation’s bicentennial, that he has filmed landscapes and landmarks across America, and that he not once but twice let Dylan’s “Black Diamond Bay” play at length in his Midwest-set 11x14, surely these cannot be insignificant details.

In her recently published celebration of James Benning’s Ten Skies, Erika Balsom writes of the difficulties in sufficiently describing the shape and movement of clouds and the precise color and softness or harshness of light. These difficulties apply equally to any critical description of Maggie’s Farm, which can be described as clinically, effortlessly, and ultimately insufficiently as the older film. It contains 24 shots of precisely three-and-a-half minutes each: eight exteriors of trees, weeds, and shrubs; eight interiors of walls and lockers in a California Institute of the Arts building; and, last, eight more exteriors of buildings and dumpsters on the university grounds. I could instead attempt to describe a single shot more precisely, noting the roughly 15-degree lean of one tree trunk in the foreground and the more drastic 45-degree slant of its neighbor in the foreground, and the empty branches of skinnier cousins growing behind them among the weeds. A critic with more knowledge of Los Angeles County flora and fauna, a botanist, or a bird-watcher might tell you if these are bishop pines or great basin pines or nut pines or lodgepole pines, and also if the rapid chatter in the background of this and so many other shots are thrashers, phoebes, grosbeaks, or finches. “How to discern the significant from the insignificant in a film interested in troubling this very distinction?” Balsom asks. Is the overarching structure of the film more or less important than the composition of a given shot? Is the exact type of pine tree more or less important than the colors on the surface of the screen?

Benning’s work is not deficient for its inability to reassure us or point us to recommended lines of inquiry. Rather, it is remarkable for the assiduousness with which it prompts these questions and, perhaps even more so, for the generosity and egalitarianism with which it rewards our personal answers. If ekphrases of Benning’s films are, to quote Balsom again, “attempts to grasp the ungraspable [that] never fully can, […] Descriptions of films rebound[ing] back, hitting the films described, changing our understanding,” we might consider that Benning’s films have the same relationship to the world. They are at once infinitely proximal to their subject thanks to the indexicality of the filmic, yet also forever limited due to the boundaries of the frame and the forceful, inevitable excision imposed by the cut. They both re-present some aspect of reality and change our understanding of that reality.

Extraordinarily little movement is visually perceptible in any shot of Maggie’s Farm without a road visible in the distance. Unless the viewer is aware of the film’s structure and has a stopwatch, no cut will be expected and each will appear devoid of motivation, at least according to the conventions that govern editing in Hollywood, art-house, and even many avant-garde films. That is, nothing in particular seems to prompt a cut to another landscape or room, leaving us to ask what it means to justify a filmmaking decision.

Although Benning’s work deliberately and provocatively asks us to think about what elements of a film are significant, comparatively little attention has been paid to the sound of his films (though Balsom offers a much-needed course correction here as well). The auditory punctuations of Maggie’s Farm are as significant as any image, reorienting our understanding of the relationship between the proximity of nature and civilization, public and private, indoor and outdoor. The first shot is not all pine trees and shrubs: just visible on the right side of the screen is a road audibly trafficked by several trucks and—less noticeably—passenger cars. The appearance of subsequent exteriors suggest we might be going a bit further into the woods, but in fact we are more likely being resituated so the road is behind us, as it is never too long before the whir of passing vehicles intrudes upon the soundtrack. There seems to be hardly a difference between a park—an inviting outdoor space that provides or simulates some of the advantages of nature for inhabitants without abandoning the sounds and comfort of industry and civilization—and the woods, a less inviting, less tamed locale that nevertheless rarely stretches far enough to take us away from those same sounds and comforts. One cannot help but notice the irony or the humor in the sixth shot, where the roofs of houses are visible in the background while the gangly limbs of a dead tree point our eye toward a sign reading “NO MOTOR VEHICLES.” The sign’s very presence serves as a reminder that civilization is not so far away. And besides, our ears do not deceive us: motor vehicles are out of sight, but certainly not out of earshot.

Despite first impressions, then, each of these opening eight exteriors is undergirded by the suggestion of human activity. Only when Benning takes us inside the nearby California Institute of the Arts, his own place of employment, are we at last free of the brief crescendo of wailing sirens, but we must also forsake the avian mating calls. The buzz of an air conditioning unit or a refrigerator and the hum of the halogen lights, combined with the absolute stillness of the image, unswayed by a blowing breeze, provide more privacy than the exteriors. The thunderous echoes of footsteps echoing off the thick concrete walls in a shot taken from inside the building’s central stairwell, however, emphasize the unpleasantness of the clinical interiors. The whites and grays that smother these shallower shots are far more alienating and entrapping than the greens and browns of the outdoors—the trees and weeds and bushes and shrubs and other assorted flora—and their greater depth of field.

The paradoxes replicate the ironic duality of American suburbia: removed from the noise and tight quarters of the city, but nevertheless a place where solitude is more readily associated with oversized homes than the outdoors torn down to help build yet more. The final third of the film is even more excoriating. The ugliness and drab colors of the interiors are shown to ruin the outdoors as well, as Benning takes us through eight final shots of dumpsters, pipes, ventilation ducts, and building facades that suggest all the perceptible irritants of earlier shots and almost none of the advantages, as if the university is parasitically feeding off its surroundings.

Yet Maggie’s Farm is not entirely pessimistic as a study of mundanity, nor is it a despairing self-portrait of a director who “ain’t gonna work on Maggie’s Farm no more.” So, to bring us back to “Girl from the North Country,” “Blue Bayou,” the National Anthem, and baseball: the first of these enlivens a pair of interiors, while the other three provide much needed solace in the second set of exteriors. If Maggie’s Farm is both an attempt to reveal something about the world through pure visual portraiture, its most profound statement—and its strongest defense of the banal—is precisely in its durational deployment of song and sport. Any film or filmmaker can tell you that art can help us access something sublime and unutterable, but where Benning stands apart is in his confidence in allowing the viewer to experience it. In his previous film, L. Cohen, Benning trains his camera on a field in Oregon for slightly more than 20 minutes before, in his words, “something extraordinary” (and something too sublime and surprising to describe here) happens. What Benning captures is remarkable on its own, but the film’s power is derived in large part from his decision to let the camera roll for another 20 minutes and in the bold decision to let a single song offer oblique commentary on what preceded it. In Maggie’s Farm, by contrast, Benning cuts during the songs. The image changes, but the music plays on. The commentary is no longer on any specific event we have witnessed or on a particular point of view, but on the tightly structured rhythm of quotidian life. Music, and by extension art, is at once a part of ordinary daily existence and a justification for it in a way that description alone cannot fully approach or explain but that is apparent if we take the time to listen and experience. Some things can be explained; others can only be understood through duration.