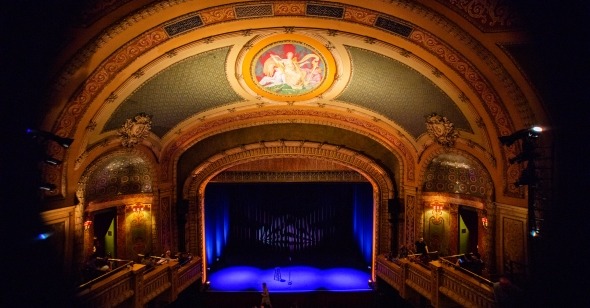 The Grand Finale
By Vadim Rizov

There were well over a hundred theaters named “the Paramount” built across the U.S. in the first few decades of the twentieth century. Their heavy red curtains, gilded box seats and faux-classical ceiling art components, once individually impressive temples in their communities, now seem essentially interchangeable to me the more such spaces I’ve seen. Manhattan used to have three, all since closed; slightly further afield, there are Paramounts still extant in Asbury Park, NJ, and upstate in Middletown and Huntington. My borough is home to the long-shuttered Brooklyn Paramount Theater: constructed in 1928, converted into a gym by Long Island University in 1962, leading to the disorienting sight of a basketball court with an Art Deco ceiling. My personal Paramount is in downtown Austin: constructed as the Majestic in 1915, renamed in 1930 (in this case, not because it was acquired by the studio), its 1500 seats firmly in keeping with vaudeville-era movie palace norms. If you showed me an unlabeled photo of one of the other Paramount interiors, there’s a chance I would think it was my childhood stomping ground.

For non-residents who come to Austin on film business, the theater’s probably best known as SXSW’s must frustrating venue, where the latest Seth Rogen premiere precipitates lines hours long and blocks deep. I’ve been to some of those screenings, but my real tie to the theater was forged between the ages of 10 and 18, during the straightforwardly titled “Summer Classic Film Series,” annually unveiled and executed with the same unvarying rhythms. A few weeks before the series began in late May, the full schedule was printed in that Sunday’s edition of local daily paper The Austin American-Statesman as a foldable one-sheet designed for magnet-supported fridge residency. As of last year, the basic lineup structure remained unchanged: Casablanca paired with one other film to kick things off, Lawrence of Arabia somewhere mid-summer, with Gone with the Wind as “The Grand Finale.” Between these fixed constants, 70 to 80 films would show every season; I would circle what I wanted to see and went to get a grounding in the very basic foundations of a classical Hollywood education.

With the token exception of a week’s worth or so of “foreign classics” (La Dolce Vita, Seven Samurai, whatever Rialto Pictures titles had recently been reissued), the Paramount’s programming was derived from a fairly staid canon that didn’t look so different from any given AFI list. David Lean epics, The Philadelphia Story and Bringing Up Baby, Frank Capra’s ’30s titles, the best-known Astaire-Rogers musicals and Universal Horrors, High Noon, and Humphrey Bogart’s greatest hits were all regularly accounted for. By the third or fourth summer, I was starting to catch on: this definition of “film history” included perhaps 300 titles total and was severely limited in scope. Eccentricities in the programming came from a few areas. No theater outside of Texas would consider annual showings of Giant, as reliable a seat-filler as 2001; that’s a regional anomaly. And, like so many rep houses across the country, the acquisition of two 70mm projectors forced the theater to justify the investment by showing any such prints they could get: optical blow-ups of Top Gun and The Remains of the Day were on the schedule alongside screenings of Lawrence of Arabia and 2001,whose annual showcases were upgraded from 35 to 70mm. Rewatching them in both formats was a whole visual education in itself.

While researching this piece, I learned more about Paul Beutel, the theater’s manager, who helped rebuild the Paramount from its debt-ridden ’70 slow point and programmed the series for many years. For him, a formative experience was seeing Bye Bye Birdie in its initial release at age 13: “At that moment,” he recalled, “I fell in love with big old theaters like that (historic theaters as we now call them), the movies—movie musicals in particular—and Ann-Margret. That was it.” That’s a very clear and specific vision of filmgoing, one he successfully brought to life with ongoing nostalgic attempts to recreate earlier modes of theatrical exhibition: double features, the additional value of a pre-feature cartoon, the odd serial chapter (normally Batman), and 35mm trailers. This could be a double-edged sword: watching the incredibly long trailer for Anatomy of a Murder a dozen-plus times one summer nearly drove me mad. (Which, I realized after a while, was my fault: normal people do not structure their summers around 25 screenings at the same venue.)

Are there still budding cinephiles who start building personal canons from the AFI-approved playbook? If there is a fairly stable, long unquestioned Hollywood canon, the Paramount’s programming would probably represent it at its most uncomplicated and ossified; the selection slate was an increasing anachronism. It was, however, the only consistent repertory game in town all summer long. Before the Drafthouse started, but after the tail end of UT-Austin’s student film screenings died out, there were only weekly screenings from the Austin Film Society to otherwise fill out the rest of the year. AFS’s programming was sometimes dutiful in a different direction (an “Italian film series” that introduced me in very short order to 8 1/2, Mamma Roma, Red Desert et al.) and sometimes amazingly specific (retrospectives on Jaime Humberto Hermosillo and Arturo Ripstein). There was also the late, lamented Village Cinema IV, a rundown art-house theater (now the site of a Drafthouse) where, occasionally, a mysterious and uncredited programmer would schedule, with no advertising, weeklong runs of new prints of Out of the Past or The Man Who Would Be King. But the Paramount was the annual constant, and it’s little exaggeration to say I grew up there—home is where, unavoidably, I had to be, but the Paramount was where I wanted to be.

What did I learn there? Some important things about the material particulars of theatrical viewing: what it’s like to watch a black-and-white movie in which every reel has different saturation levels, and that reels are most scratched at their beginning and end, which is how you can internally time a film. For years, the projection was fairly dismal, and the sight of every cigarette burn made me tense up anticipatorily until the reel change had been safely navigated. This is also where I learned what it’s like to witness a frame catch in the projector and burst into flames (first experienced at The Man Who Shot Liberty Valance). I discovered my preferred seat: five or six rows back, right of center.

I didn’t learn anything about the kinds of eccentrics I would see in New York rep houses when I moved to the city until a SXSW screening at the Paramount of Cinemania, a cautionary tale about the rep rats I would soon be encountering on a regular basis. In Austin, the crowds were generally calm and family-oriented, aside from a solo viewer who quietly sang along to every tune in Phantom of the Paradise. (After, I asked him what the deal was; he said he’d seen it hundreds of times.) I learned that many people would not, in fact, like to join you to watch anything older than 30 years, and that filmgoing was a solitary, rather than social, occupation (which I still think is true). I am immensely grateful that the space was there for me and that the programming was what it was, a gift teetering on the verge of obsolescence, hard to imagine accessing now.

The Paramount is the first theater I formed an attachment to for a reason other than it being a nearby multiplex. I have inevitable nostalgia for a space I haven’t entered in a decade: I don’t need to see it in person again to realize the lobby was even smaller than I probably registered, the seats and carpeting relatively shabby (probably inculcating a life-long love of endearingly rundown spaces in the process). Growing up it always struck me as a little sad that people in other cities had to start digging into the canon through a video store rather than one reasonably priced 35mm screening at a time, which it seemed like everyone should have access to. Nonetheless, it’s grown harder to ignore the unquestioned assumptions and blinders governing the theater’s programming: Beutel is long-retired, but this summer’s series, its full line-up never publicly unveiled, was indeed announced to have begun with Casablanca and, I presume, would have once more ended with Gone with the Wind in the absence of recent developments. I was, therefore, startled to recently see a local news photo of the theater in an entirely new context: its marquee reading “Black Lives Matter,” a demonstrator beneath. The optics were entirely unexpected, completely unimaginable in the aspirationally depoliticized context of my childhood viewing: at that moment, the theater had one job—to provide, whether sincerely or expediently visually support for a larger moment—and did exactly what was needed.