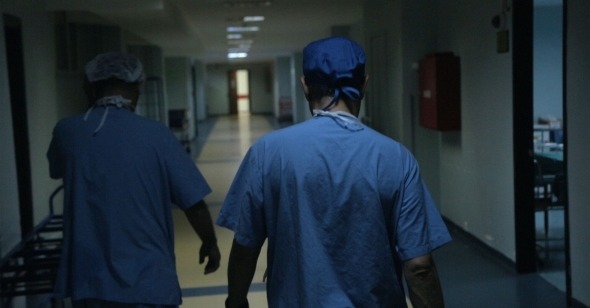 Phases of Matter plays at Museum of the Moving Image on Saturday, July 31, as part of First Look 20/21.

Visiting the museum on the Wednesday prior—back when most people only whispered of quarantines and joked about shaking hands—the building’s modern, all-white interior took on a new perspective. It was as if it had been designed specifically to cope with the imminent situation, everything spaced apart and overly clean, sunlight beaming in like an almighty disinfectant. The only thing polluting this ostensibly sterile environment was an installation projected on the wall opposite the reception desk: karlssonwilker’s 2016 video piece Vicissitudes. It was impossible not to fixate on its images, a squirming collection of odd shapes and structures, all floating about, shifting and mutating. They resembled the makings of a virus—protein tendrils, rigid capsids, writhing genomes—contained, for the time being, by the edges of the frame.

This was, of course, just my own projection, all my anxieties cruelly writ large in some cumbersome CGI rendering, but had Phases of Matter screened a few days later, I’m sure the film would have been viewed in a similarly skewed way. Tortum’s film is the story of a hospital (a real one, not imagined). It shows patients sick, dying, and dead. Given the way people are at this moment reacting to a mere cough, the abundance of hospital beds and breathing apparatuses onscreen may have been an overwhelming experience for a New York audience.

An audience's fixation on pestilence might have worked against the film, in that Phases of Matter is not interested in the hospital as a site of sickness. Speaking via email, Tortum regularly used the word “festive” to describe his impression of the place, and the feeling he wanted to portray. Tortum’s documentary is concerned with workers—the human element that can transform the moribund into a “festive” feeling—following the daily doings of surgeons, nurses, janitors, dieners, students, and professors. Patients—and with them, illness, pain, and death—are deliberately obscured from the frame, placed on its edges, to be discovered or disappeared during one of Tortum’s many long takes. By drawing attention to the practicality of the space, all the suffering of the hospital is subsumed by the banality of the institution itself: that rote mode of response applied to brain surgery and paperwork alike. In some cases, it feels calm, in others, anesthetized.

This is not to say that Phases of Matter is an austere or unfeeling film—quite the opposite. Tortum’s approach is intensely personal. He never fixates on the bureaucracy or finances or brands that often weigh down our feelings toward “wellness” in the United States, just relationships, conversations, and teachings. This level of compassion is likely owed to Tortum’s unique connection to the place: Istanbul’s Cerrahpaşa Hospital is where Tortum was born, and where his father has worked for thirty years. As a result, the film often feels as if a childhood friend is showing you their home for the first time, welcoming you in, guiding you through every nook and cranny—here are my strange rituals, my memories, my foundations.

Tortum lends a sense of intimacy to what he has been allowed to show. Observing surgeries in an over-the-shoulder view, panning between heart monitors and technicians on their phones, Tortum recreates the tiered-seating operating theaters of old. Everyone is an onlooker, every task a demonstration. Our presence feels no different than the myriad student doctors who populate the film, all eager to get a peek at whatever otherworldly practice is taking place in that moment. Yet, the film’s mode is not didactic. Rather, it unveils to us the nature of medicine as a practice of seeing. In the film’s opening scene, Tortum’s camera circles slowly around a group of those doctors, huddled together, taking instruction from a professor. We’re stuck behind them, our view obscured by heads and shoulders jostling for position, catching faint glimpses of this thing they congregate around—is it a body, some kind of prosthetic; is it human, is it alive? Finally, Tortum unveils to us a long-dead cadaver, gray and withered, with the teacher pulling out its intestines for everyone to see. There is a doubling here: both Tortum and the teacher making visible new subjects, new meanings, penetrating an outer layer to examine, as Michel Foucault writes in The Birth of the Clinic, “the shapes of things as they really are.”

This concept—the important overlap of “making visible” in both medicine and filmmaking—is furthered in another teacher-student sequence, in which Tortum films the early stages of a hiatal hernia surgery. (Initially it’s a site of chaos: the professor is furious that his “ultracision” scalpel is missing, doctors fall over each other, machines glitch and fail.) Once everything is properly prepared, the surgeon drives a series of hi-tech lances into the patient’s belly: entry-points for cameras and other tools to operate internally. Tortum follows the action on a small screen—camera filming camera. The doctors navigate the patient’s innards, steering between his liver and stomach, muscle and fat. Tiny claws mimic the action of the surgeon’s hands—a through line at once literal and symbolic, one image signifying another, merging macro and micro on these two conjoined screens. The French word for film, pellicule, comes from the Latin pellis, meaning skin, and Phases of Matter often functions as a kind of filmic surgery—the image of screen-within-screen recreating the action of dissection and discovery, of making meaning through visibility. (The surgeons do a similar thing in prepping the patient’s body: all non-pertinent areas covered over with cloth and tied off with clamps, they create a literal frame in which to work. This frame is then superposed, given new depth, on the operating theater’s screen.)

In this way, the film evokes Foucault’s concept of the “medical gaze,” a viewpoint unique to doctors that separates the patient’s illness from their person. According to Foucault, the medical gaze emerged at the beginning of the nineteenth century, when medical technologies improved and “the relation between the visible and invisible—which is necessary to all concrete knowledge—changed its structure, revealing through gaze and language what had previously been below and beyond [the doctor’s] domain.” This allowed for the “the silent world of the entrails, the whole dark underside of the body” to be “challenged as to their objectivity” by these new modes of seeing.

Tortum expressed a similar idea to me: “There’s a certain way of looking at things as a doctor. A certain emotional distance you need to have to people and issues.” And while Foucault’s term was meant, in part, to describe the way a doctor’s lust for “objectivity” might lead to dehumanization, Tortum is careful to expand this into more neutral territory—stating that a doctor also requires “empathy and care, especially to people you don’t even know. An acceptance of an overwhelming futility, but also not finding this futility disheartening but knowing that this is central to life. And a very strong sense of humor to deal with everything, an immense ability to take things lightly.”

Tortum is careful not to deify the doctors, nor overly dramatize their lives. That “overwhelming futility” he describes works against hierarchies. Doctor and patient, young and old, living and dead: these are all equal beings. “This might sound counterintuitive, but I do view the medical practice and thought as non-anthropocentric. There are humans, yes, but there are also drugs, bacteria, medical equipment, limbs. There’s a flat ontology between all. And I see this as an essential thing to the practice.” Key to Tortum’s philosophy is this idea of a “flat ontology”—that the work of the bacteria is equal to that of the surgeon. (This is also a useful way of rethinking the macro-micro relationship of the surgeon’s hand and his tiny mechanical claw: one operates the other, but they are both essential; they both depend on each other to properly perform their function.)

“By the late twentieth century,” writes philosopher Donna Haraway, “we are all chimeras, theorized and fabricated hybrids of machine and organism; in short, we are cyborgs.” If Phases of Matter works against anthropocentricity, it is foremost in this way—in the interweaving of the organic and mechanical. For Tortum, this is not just in the sense of a posthuman conception of man extended by tools—a doctor with phone or claw in hand; his “cyborg” is more totalizing than that. While he had expressed, during our interview, an interest in “the technological aspect of medical work,” how “the body is mediated through various medical equipment,” Tortum’s film equally reverses this idea, using clever formal tactics to approximate the hospital as a living body of its own. In the film’s centerpiece, a long take traces the hallways of the hospital like veins, passing room after room of doctors clustered together, hard at work. We might imagine them as white blood cells, tiny antibodies maintaining an ecology of life and death. Each room beams with energy—pulsing sound and light out into the dark hallway as the camera drifts by, creating a sense of rhythm. We feel the hospital’s heartbeat; we hear this organism breathe.

Tortum continued: “I did research into different ways of visualizing the body, the CT scan, ultrasound, X-ray . . . I was really into the idea that how we create images, our representational technologies, also change how we conceptualize our bodies and environments.” In the film’s closing scenes, he puts these different technologies to work in service of this idea, filming the hospital—that great symbiotic body—in increasingly abstract ways. This occurs first in a turn to black-and-white 16mm film, a ghostly montage of empty spaces—a waiting room, reception desk, operating theater—before the film transforms again, using point cloud mapping to express its images in three-dimensional dot-work. The film itself begins to break down, to decompose, losing color and outline and shape and form. The hospital slowly disappears. And as it does, with some sadness we recall the film’s opening dedication: “For Cerrahpaşa Hospital, where I was born, where my father works, and which may be demolished soon.”