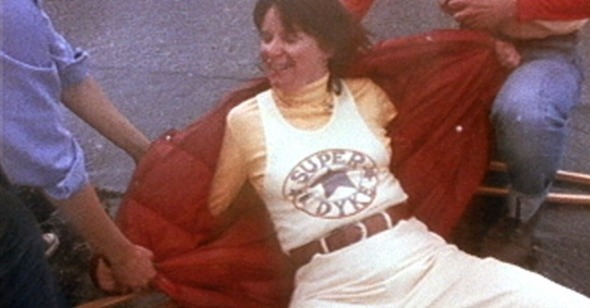 Barbara Hammer is often defined by her early works, which capture her impassioned awakening and her documentation of American lesbians during the height of gay and women’s lib. Indeed, Dyketactics (1974), Superdyke (1975), and Women I Love (1976) are an invaluable trinity representing communal living, feminist activism, and consciousness-risen clitorises, all shot on 16mm. These and a bounty of other works are showing as part of Museum of the Moving Image’s Barbara Hammer, Superdyke series, which begins today, July 19.

From the beginning, Hammer indicated that she wanted to leave behind a herstorical treasure trove for her queer progeny. “I put lesbian life on this blank screen . . . a cultural record for future generations,” she decreed. It was generous forethought for her to gift others the lavender genealogical data that she, born in 1939, well before the sexual revolution, had lacked. But the filmmaker, eyes trained intently in her BMW motorbike’s rear-view mirror, was equally invested in the lesbian experiences that predated her contemporaries. She craved ancestral knowledge. There were the early conquests of those who surrounded her. And then, in later films, there was the unrequited challenge of women who came before her; these are the efforts that endure most potently.

Earlier works, including Menses (1974) and Superdyke Meets Madame X (1975), have become charming relics of their times. Co-created with video artist and Hammer paramour Max Almy, Madame X is a fascinating 20-minute negotiation between authentic intimacy and the presence of a camera that mitigates it (a then-new piece of wearable tech known as the Sony Portapak that was famously used to film concerts at CBGBs). Hammer, nude and prone as Almy films her, explains her erotic disinterest in men by speaking of the penis: “I don’t relate to it; it’s not part of myself, so.” Decades later, lesbians including Hammer, with the aid of queer theory, had all but rendered these once-meaningful though rudimentary ideas of female-bodied solidarity moot. If anything, determined use of such a démodé sexual politic seems increasingly allied with hostility toward transwomen. “Old stereotypes of lesbians not liking penises is out,” she joked in a 1993 interview. “We are polymorphous perverse. We like everything.”

Hammer has more than made up for outdated ideas by teaching through biographical works that address the distant past, a timeless lesson in unearthing and honoring lineage, even when a traditional (i.e. inaccessible) archive of documents is sparse or absent. Screening as part of the Museum’s series, nonfiction works like Nitrate Kisses, Pools, Snow Job: The Media Hysteria of AIDS, and Tender Fictions are made from piecemeal— disparate oral histories, unvarnished microform, and healthy imagination. Hammer took footage of edifices, the specter of their old inhabitants and architects omnipresent. At times, her experimentation is motivated by a lack of alternative. She lets us sit with the implicating silence of lesbianism indulged in discretion, censored, or both. Sometimes, she allows a prominent feminist voice—writers Adrienne Rich and Pat Califia, among others—to speak for her.

Issues of coming out, finding community and getting laid have long been intrinsic to lesbian aesthetics and subcultures. As variations on LGBTQ life—often simplified, tidy, and unsatisfying—continue to be swallowed and regurgitated by mainstream fare, it is implied that queer marginalization has been rectified. But take away the margin, and our subjectivity, messy though it may be, goes with it. All the more reason to hunger and hunt for more than what is in plain sight, as Hammer always did.

In 1981, in the privacy of her own journal, the author Susan Sontag wrote about her own hunt, comparing it to lively homosexuality. “Like a hyperactive queen, I cruise culture daily. Have a thrill or flash of ecstasy several times a week. My appetite is compulsive, promiscuous.” For Hammer, this was no metaphor. Nor was it private. That same year, she co-created Pools with director Barbara Klutinis, a six-minute immersion into the majestic Roman-inspired swimming pools on publishing titan William Randolph Hearst’s property in San Simeon, California. In capturing them on film, Hammer quietly recovers a lesbian feminist inheritance, long delayed: the Hearst Castle pools were designed by Julia Morgan, the first woman to graduate from the Parisian School of Beaux Arts, in the first half of the 20th century. She never married or gave birth.

The pools offer as much serenity as they do frustration. Rows upon rows of multicolored blue tiles, crafted by Morgan herself, reflect the sunlight streaming into the building. Water laps at its containers and the bases of statues of Roman gods. A pump or mechanism, incongruous with the continual trickle of filtering water, thumps in the distance. It sounds as though someone, perhaps the forgotten ghost of Julia Morgan, is futilely trying to escape the estate. Camera in tow, unseen in either body or shadow, Hammer enters the blue. Her third eye bobs at the water’s surface, giving the public unprecedented access to a private property that is, and perhaps always has been, sinfully vacant. Pools is to Morgan’s architecture what Morgan’s architecture was to Hearst Castle: a considered labor by a queer woman artist that is oft unseen by those who stand to be most impacted. Yet apart from a photograph of a bespectacled woman and a note that the film was made “in honor of Julia Morgan” during the end credits, Hammer, keen on letting the architect’s work tell its own aqueous story, lets the question marks of Morgan’s proclivities hang in the chlorine-scented air.

Screening twice during Barbara Hammer, Superdyke, Nitrate Kisses (1992), a look back at queer life before liberation movements, is far less forgiving of the powers that have omitted queer existence. The feature begins with an Adrienne Rich epigraph, occupying the entirety of the frame: Whatever is unnamed, undepicted in images, whatever is omitted from biography, censored in collections of letters, whatever is misnamed as something else, made difficult-to-come-by, whatever is buried in the memory by the collapse of meaning under an inadequate or lying language—this will become, not merely unspoken, but unspeakable.

Hammer is quick to name and to depict in images, intercutting discussion and artifacts of prewar LGBT life with sexual encounters between queers. One tryst, involving an interracial gay couple, transpires as the words of the Hays Code—which forbade both depictions of queers and miscegenation—cheekily scroll up the screen. Nitrate Kisses is deliberately bawdy, making up for lost time while determinedly rescuing the fragments of history that remained. With her passing this March, Hammer left far more than a “cultural record”—she left an encyclopedia of histories, herstories, and theystories, painstakingly researched and smartly articulated, that predate her own. They too await us.