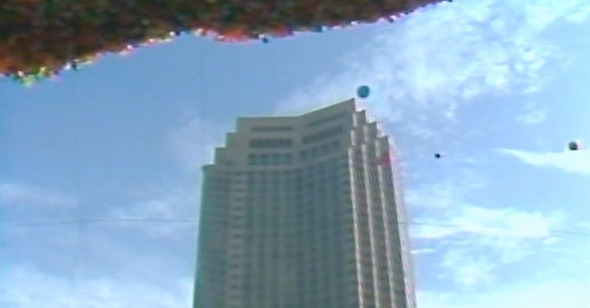 These documentary shorts screen in Strange but True: Shorts Program II, Monday, January 16, as part of Museum of the Moving Image’s First Look 2017.

In 1931, James Truslow Adams coined the phrase the American Dream, writing, “Life should be better and richer and fuller for everyone, with opportunity for each according to ability or achievement.” Somewhere along the way, this dream changed. Better and richer and fuller transmuted into a more restless longing for more; the hope of making it big with grand or novel acts. Three documentary shorts in First Look 2017’s Strange but True: Shorts Program II work in tandem to paint a portrait of a particularly American brand of hope; it’s tender, a little tragic, and it doesn’t come in HD.

Balloonfest, director Nathan Truesdell's six-minute miniature masterpiece, is comprised almost entirely of archival footage from local TV news stations in 1986 Cleveland. The clips, with the help of a few intertitles, tell of the struggling city’s attempt to enter the Guinness World Records by sending 1.5 million balloons up into the sky. Don’t be fooled by its brief length—this little film stretches time and carefully builds the tension that leads to an almost heart-wrenching conclusion. At first we get caught up in the kitschy local news cycle, with its ridiculously overblown enthusiasm. Initially, it feels merely nostalgic, with the newscasters and interviewees so jazzed about their project that it crosses over into naiveté: Cleveland is primed for a comeback, as these balloons will prove to the world. As civic pride continues to boil over, a darker undercurrent is felt. The balloons gather in a massive net, the helium creating an upward tension, ready to bust out. When the balloons are released ahead of schedule, due to incoming weather, an aerial shot shows them rising above Cleveland’s Terminal Tower downtown; from afar, they look like an explosion of smoke and flames engulfing the landmark. Amidst the rising orange cloud, newscasters gush about how this act is going to turn the city around, “Ladies and Gentlemen, there is no ‘mistake on the lake’ anymore! Cleveland has now broken the Guinness Book of World Records.” At this point the image shifts, perhaps the footage comes from a home video. A shaky camera follows the balloons as they drift off course over the lake. The same day, a rescue boat is searching the lake for missing fisherman, who are nearly impossible to spot because of the sea of balloons, a tragic byproduct of Cleveland’s aspirations.

John Wilson’s documentary essay The Spiritual Life of Wholesale Goods sneaks up on the viewer in the most unexpected ways. Wilson shoots and narrates in a haphazard video diary manner—the whites are all blown out, the handheld camera moves off-kilter, his narration continually and unevenly trails off and starts again. The film’s apparently casual style belies an inherent rhythm in the piece that actually is quite elegant. It feels less like a streamlined movie than a breathing human organism. What initially registers as an ungainly video diary quickly reveals itself as a deeply resonant meditation on why we do what we do. The film begins with Wilson discovering a series of inspirational quotes on the packages of dollar store items in New York City. A simple investigation into them leads him to a warehouse in Queens, and then a Las Vegas trade show for novelty goods. The trade show is bleak, filled with the clunky futurism of cheaply manufactured goods made to appear high tech. Meanwhile, Wilson’s journey is infused with its own sadness. Due to the bankruptcy of the online travel site he used, he is forced to pay for his hotel room twice. The people from Queens, whom he ostensibly went to Vegas to see, are busy at their booth when he arrives. Wilson wanders around the trade show interviewing the other vendors about the spiritual nature of their businesses. Merchants sell their wares to the camera, or explain their spirituality. There is an intense earnestness in these interviews—perhaps the pinnacle is the man who claims the inspiration for his best-selling penis-shaped jello shot syringes came from above: “I actually prayed to God for years to think of an idea for a product, and I couldn't think of anything, and then one day it just came to me.” There is a hardworking sincerity and significance that each vendor imbues in these insignificant items. What The Spiritual Life of Wholesale Goods communicates is an interconnected relationship between outward-facing dreams of “making it big” and our inner need for a higher purpose. We want what we do to matter; Wilson’s film shows us that somehow it does, even when it doesn’t.

Charlie Lyne’s Copycat is about a different kind of search for relevance, focused on Rolfe Kanefsky, a horror director whose chance to hit it big came and went after he made his first film at age 19. Kanefsky’s would-be breakout There’s Nothing Out There (“the first postmodern horror movie,” the narration says) premiered in 1989, a time when the film claims the horror genre was crashing and burning after a period of popularity. Lyne uses clips from Kanefsky’s movie along with images from other horror movies of the 1980s and 1990s to tell of every aspiring creative’s greatest fear: to create something of value, see it ignored, and then watch as someone else steals your idea and gets the glory. Like Balloonfest, Copycat is comprised entirely of found footage. Kanefsky retells the story in voiceover with a jaded chipperness that is familiar from other bitter tales of near-brushes with success. There are a lot of reasons why Kanefsky didn’t make it. But the film makes it clear that the knowledge that he could have still weighs on him.

Together, Balloonfest, The Spiritual Life of Wholesale Goods, and Copycat, in all their low-fi, grainy glory, communicate an innate sense of the melancholy that comes with dreaming big, calling attention to the gaps that can’t be filled. Each shows the glimmer of possibility alongside a more mundane reality, a tender area of disconnect between dreaming and living. In stark contrast to these are the last two films in the program; both are Croatian slice-of-life portraits of women struggling to make it in their environments. A Short Family Film by Igor Bezinovic follows an elderly woman just released from prison, who had been arrested years before for trying to stab her daughter-in-law. Nebojsa Slijepcevic’s Something About Life concerns an outcast girl living in a home for troubled teens and trying to gain control of her emotions. In these two films there are no products, no schemes, or near misses with glory; each is a directly personal story of psychological survival. On the surface there is more to empathize with in these two films: individuals with specific struggles to relate to. It might seem initially odd to put these two distinct groups of films together, yet somehow they help inform each other. The Croatian films provide a basis that further trivializes the shiny pursuits and abstract longings of American dreamers, yet with that, the futility of their aspirations feels all the more tragic and perhaps beautiful.