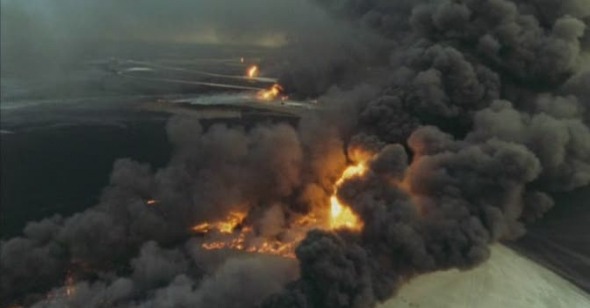 It only takes a half-dozen dissociated shots for Werner Herzog to build and destroy an entire civilization in Lessons of Darkness. In his 53-minute documentary on the Gulf War and its aftermath, the war begins and ends by the fourth minute. The rest of the film is mainly a long tragedy documenting the oil fires that engulfed parts of Kuwait in black smoke and columns of fire for much of 1991. However, instead of journalistic accounts of the geopolitical situation, or mentions of Kuwait, the United States, or Iraq, we’re given misdirection: the voiceover introduces us to “a planet in our solar system,” with “wide mountain ranges, clouds, the land shrouded in mist,” where alien-like “creatures” in jumpsuits deliver menacing hand signals to Herzog’s camera, telling him to turn it off.

The Gulf War, spoken of early on as a mysterious “something” looming over an unnamed city, is enclosed within a grainy, 30-second night-vision shot of faraway explosions. The succeeding images we see are similarly lyrical—mysterious industrial towers, animal bones—and are so divorced from one another that they lose any sense of place. My rough count says there are 30 spoken lines in the entirety of Lessons of Darkness. These are usually choppy remarks that preface long passages of wordless awe at deep focus vistas of burning desert. There is a tug-of-war between Herzog’s droll abstraction and silent witnessing, but that dichotomy is enlivened by the unpredictability and breadth of moments Herzog documents, along with the spin Herzog’s voice puts on them.

Lessons of Darkness is structured into twelve chapters, some of which consist of a half-dozen shots only, and is introduced with a totally fabricated quote attributed to Blaise Pascal about the collapse of the stellar universe, occurring “like creation, in grandiose splendor.” Herzog nicknames the construction equipment tasked with quieting the blazes “dinosaurs,” and as they rip up the swampy land, the image resembles a heavy metal album cover. His voiceover is peppered with biblical verse, and the soundtrack features bombastic classical music. At one point, Herzog sets sequences of contractors brought in to extinguish and combat the blaze to Mahler and Verdi; as the hoses spray the machines and men try to plug gushing flumes of smoke, fire, and oil, we are shown the violent contest of the four elements within the same frame. But to claim Lessons of Darkness as a riff on or reference to the Book of Revelations or T. S. Eliot’s “The Waste Land” wouldn’t take into account its moments of eccentric humanity: as memorable as some of the grander images is a shot of two figures each smoking a cigarette while covered in oil. Herzog doesn’t forget to remind us, by way of a jolly man with sludge in his mustache examining a chunk of pipe, that driving the dinosaur is someone’s day job, just as it was some other fellow’s command to savagely cripple Kuwaiti oil production, and thus turn the Fertile Crescent into a real-life hellscape.

There are moments, though, when the film’s grandiose splendor and wry humor give way to comparatively quiet, almost vérité documentation on intense human cruelty and suffering. “All we could find were traces,” says Herzog early in the film. References to soldiers, the agents of this destruction, arerecounted via snippets, like an image of a collection of torture instruments laid out on a table in a nondescript room, or the story a mother tells of a soldier’s boot pressed down on her child’s head. The intercutting between these moments and the panoramas of the oil fires helps to reshape and interrogate Herzog’s more sumptuous compositions. Wagner’s Götterdämmerung accompanies the evil landscapes on screen, and the camera’s wide angles make painterly compositions out of total chaos. At the concluding moments of the film Herzog includes shots of firefighters tossing torches into the oil plumes to reignite the blazes, wondering “has life without fire become unbearable for them?” and pointing toward man’s tendency toward fire and destruction. As in Herzog’s other nature films, and the here oft-quoted Book of Revelation,there is a recurring recognition of God’s wanton power to create and destroy nature in spectacular fashion. Man, attempting the same in Lessons of Darkness, plays Satan.

The image of Herzog driving around the world in obsessive pursuit of sufficient cinematic images (he speaks of the global consumption of images as being “impoverished”) has been unfortunately meme-ified, and has reduced Herzog’s motifs and artistic signatures to shtick. Herzog’s true fascinations often get lost in today’s conversations about him, most of which center around the larger-than-life stories he tells about himself and the arch pomp of his voiceovers. But Herzog follows a particular cinematic tradition; he is on record in interviews detailing how his work was influenced by the German mountain film, an obscure corner of pre–Third Reich German cinema in which the hero conquers the self and nature by climbing mountains. Indeed, among Herzog’s most enduring single images is the shot of a foregrounded Klaus Kinski contemplating the mountain in the distance in Fitzcarraldo. The perspective of his films is often, as it is here, that of a central character whose human spirit is cast against some totemic, indomitable thing, which exists just beyond his control by virtue of its size and, on a metaphorical level, beyond comprehension. It can be a literal mountain to be climbed and overcome, as in Fitzcarraldo, Scream of Stone, or the documentary short La Soufrière: Waiting for an Inevitable Catastrophe. In a more abstract sense, the thing could be the concept of community (Even Dwarfs Started Small, The Enigma of Kaspar Hauser, Heart of Glass), the opaque processes of religious worship (Wheel of Time, Bells from the Deep), or the expanse of an entire world just beyond our fingertips (Land of Silence and Darkness, The Wild Blue Yonder, his upcoming documentary on the Internet titled Lo and Behold: Reveries of the Connected World.)

La Soufrière in particular makes for an excellent double bill with Lessons of Darkness, and provides us with one way of understanding the density of Lessons of Darkness in the context of Herzog’s other works. The inevitable catastrophe hinted at in La Soufrière’s full title is the eruption of a volcano. It never erupts, though, and the farmer ready to die on the slope of La Soufrière is ultimately spared. His story of a man staring death in the face is nevertheless typically Herzogian, depicting a man encountering something beyond comprehension. This experience in the face of death carries over from the peak of La Soufrière to the barren oil pits of Lessons of Darkness, only with more sinister connotations.

Herzog has said that many of his documentaries feature what he calls “embarrassed landscapes,” which have been so warped as to lose their identity. In Lessons of Darkness, the landscape is so mutilated by war that it takes on an otherwise featureless quality. Herzog made no effort in interviews to hide the fact that the mountain ranges at the opening of the film were just zoomed-in images of tire tracks. This speaks to the illusory mode of Lessons of Darkness, where, per Herzog, “The oil is trying to disguise itself as water.” This fraudulent landscape offers an example of “ecstatic truth,” a term Herzog gave for the strain of half-facts that encompass his documentaries and fictions. Herzog’s style exploits our conception of natural beauty to illustrate the paradox at the heart of war—that it invokes a sublimity and wondrousness even as it’s based on lies and corruption. The film can be seen as the apex of many of Herzog’s concerns, but it is also a dark mirror of his other works, a mountain reflected in a shimmering pool of oil.