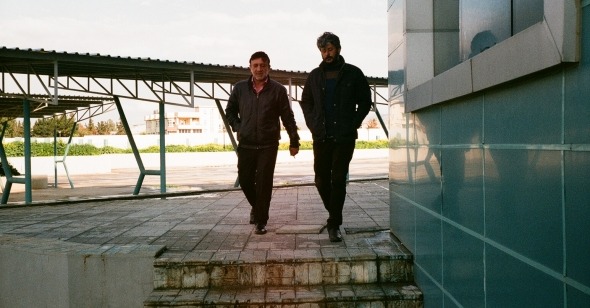 Many of Reverse Shot's writers and contributors come from and reside in locations all over the U.S. and beyond. Escape from New York is a column devoted to reminding us Manhattan-and-Brooklyn-centric moviegoers that we are not the world when it comes to cinephila.

Toward an Iraqi Kurdish Cinema
by Emma Piper-Burket

In Iraqi Kurdistan, filmmaking is a national duty. For the past decade Kurdish filmmakers and government officials have been steadily working to build a movie industry from scratch. Except it’s not quite an industry. There are no for-profit production companies, nor is there any infrastructure for local film distribution. The films produced in Iraqi Kurdistan are rarely seen by local audiences; instead they are sent out as diplomatic envoys to international festivals. This all is part of a broader project to establish a presence and awareness of Kurdish identity abroad.

This situation can even be seen there on-screen, fictionalized in director Shawkat Amin Korki’s latest film, Memories on Stone (2014). In one scene, a pick-up truck drives through a crowded refugee camp in Northern Iraq with “Kurdistan Action” decals painted on both doors. An assistant director shouts to the crowd from a loudspeaker, “Attention! Attention! Kurdistan Action is currently making a film about the Anfal genocide. It’s being directed by Mr. Hussein Hassan. Dear patriots of this camp! It's our duty to support this film to its completion. It's a national duty.”

This might as well be dramatizing a real-life moment from the Iraqi Kurdish city of Duhok this past summer, where Hussein Hassan, the leading actor in Korki’s film and well-established director in his own right, recently finished shooting his feature film Reseba in a refugee camp on the outskirts of town.

To best describe the current state of filmmaking in Kurdistan, a (very) short history lesson might be in order. Kurds are not Arabs, nor are they Turks, or Iranians. They are a distinct ethnic group whose historical territory is divided between Northern Iraq, Northwestern Iran, Eastern Turkey, and Northeastern Syria. Being a minority, and far away from the capital cities of these nations, Kurds from all four parts of Kurdistan have been socially and politically marginalized for much of the 20th century. In the 1980s, Saddam Hussein’s brutal Anfal campaign targeted Iraqi Kurds, destroying 4,500 villages and killing an estimated 100,000 people. With some intervention from foreign powers, a no-fly zone was established over the Kurdish territory in 1992, and at that time the Kurdish Regional Government (KRG) was formed. The KRG has functioned as a semi-autonomous nation ever since. Semi is the operative word, however: all foreign embassies were still in Baghdad, and the UN sanctions imposed on Iraq during the 1990s also applied to the KRG. The KRG was acting independently, but it was still completely isolated from the outside world. After the fall of Saddam in 2003, things changed rapidly. Free from the sectarian violence that plagued the rest of Iraq, foreign businesses and consulates began shifting their attention north to Erbil, the capital of the Kurdish region. Money streamed in, and many Kurds who had been living in exile in Europe or North America began returning home. Though Kurdistan was finally meeting the outside world, the scars of the past decades still stung deeply.

Among those returning from the Kurdish diaspora were filmmakers, eager for the opportunity to finally tell stories from their homeland. Inspired by the international success of New Iranian cinema of the 1990s and the early films of Bahman Ghobadi, an Iranian Kurd whose films, such as A Time for Drunken Horses (2000) and Turtles Can Fly (2004), garnered much festival attention in the early 2000s, government officials and local filmmakers looked to cinema as a way of establishing an awareness of Kurdistan on the world stage. Through the Ministry of Culture, each of the major cities: Erbil, Sulaymaniyah, and Duhok, established Directorates of Cinema; each directorate with its own film commission, supporting one to two features per year, along with a handful of shorts.

Salih Arif, the director of the Directorate of Cinema in Duhok, describes the selection criteria for the films, “The director has to have a good CV, outside [of Kurdistan] it’s also like that I think. We do not give budgets to someone who is trying to learn, to make a first feature film for example. We try to choose from good directors and good scripts. The scripts, the themes that are representative of Kurdish suffering and Kurdish culture. That’s how we participate outside, because people want to know about Kurds more during these years, it’s something new for them: Kurdish people are making films and they have their own culture, and they are separated into four parts, that’s what we are trying to choose with the subjects of the films.”

The goal is high-quality art cinema that will be screened abroad. Despite great odds, no infrastructure and very little formal filmmaking experience, Iraqi Kurdish filmmakers are somehow succeeding. The first film funded by Duhok’s Directorate of Cinema, Narcissus Blossom (2005), codirected by Hussein Hassan and Masoud Arif, premiered at the Berlinale. Hisham Zaman, an Iraqi Kurd living in Norway, shot Before Snowfall (2013) in Duhok as a coproduction between the KRG, Norway, and Germany. It won Best Nordic Film at the Göteborg Film Festival and Best Film from the Arab World Festival in Abu Dhabi, as well as a prize for Best Cinematography at the 2013 Tribeca Film Festival. Korki’s Memories on Stone was recently submitted as Iraq’s official entry to the Academy Awards.

With each new production, the local knowledge base increases. A team is forming. This is especially noticeable in Duhok, where the films mentioned above were all made. Salih Arif, the newly appointed director of the local Directorate of Cinema, works with Shamal Sabri, Bina Qeredaxi, and a crew of other local filmmakers who serve as line producers on the international coproductions to manage the film fund and tirelessly build the infrastructure of a local film industry. They are all under 30. What they have accomplished in a few short years makes one optimistic about what’s to come.

Many of the filmmakers returning from the diaspora mention the lack of skilled local crew. Those filling specialized roles—cinematographers, editors, and sound recordists—are often brought from Iran or Europe. The local filmmakers, while sometimes lacking in certain technical skills, are extremely well versed in film history. They see their work as following in the traditions of Italian neorealism or Iranian cinema. Another major influence on local filmmakers is the legendary Turkish-Kurdish director Yilmaz Güney, whose harshly realistic Yol won the Palme d’Or at Cannes in 1982. Güney, who overcame great odds to make this film, directed Yol from prison, smuggling out instructions to his assistant Şerif Göran, who executed his directions on set. Ultimately Güney escaped from prison and edited the film in Europe.

Local filmmakers, inspired by cinematic traditions focusing on real life, have been able to accomplish great results with few material resources. Memories on Stone is a particularly special example because it offers a rare insight into the local filmmaking scene in Duhok. It is the third feature directed by Shawkat Amin Korki, and was cowritten by Korki and Mehmet Aktaş, the Berlin-based Turkish-Kurdish producer behind mîtosfilm, the production company also responsible for Before Snowfall and the upcoming Reşeba. Korki and Aktaş based Memories on Stone’s script on their own experiences making films in Iraqi Kurdistan. The details are so true to life that it borders on documentary, following all the pitfalls faced by local filmmakers. A frequent difficulty is finding local women who are allowed to act. While Iraqi Kurdish society is slowly growing less conservative, even adult women must get permission from their families in order to appear onscreen, permission that many families are still not willing to offer. This struggle is one of the major plot lines of Memories on Stone; other common difficulties the film takes up include the perils of smuggling equipment and crew from Iran, frequent power outages, and the final hurdle of screening the film for local audiences. It also manages to cleverly address the central themes of Kurdish cinema, the history and suffering of the Kurdish people, while at the same time transcending them. In the film, the crew is making a movie titled Anfal, and the production headquarters are based in a prison where many Kurds were kept at that time. In early September, Memories on Stone finally played for the Kurdish public as the opening night film of Duhok’s Third International Film Festival, complete with a red carpet and VIP guests, and was scheduled for a local theatrical opening later that month—the first Kurdish film to be given widespread domestic release.

The great advancements in Iraqi Kurdish cinema cannot be separated from the surrounding context; the troubled history and equally troubling current events are present at every turn. Last year the festival was canceled when over 100,000 refugees from Syria and other parts of Iraq flooded into Duhok. This year at the festival, film screenings were free for refugees. Now with the continuing threats from ISIS moving ever closer to Kurdish territory, the fight for survival continues.

These new struggles are already being adapted into the local filmmaking project. Reseba is based on the events of August 2014, when ISIS attacked Yezidi villages, selling women into sex slavery and forcing thousands from their homes. The refugee camp where the film was shot is the refugee camp where those same villagers are now housed.

The origin story of Reseba is a perfect illustration of how the immediacy of current events infiltrates the local filmmaking culture. Aktaş was working on a different script with Hussein Hassan when ISIS took over Mosul last year and Duhok became flooded with refugees. As Aktaş explains it, “We thought that the film was over, maybe we would go to help the refugees because everywhere in Duhok there were refugees.” This is when Aktaş arrived at the idea for Reseba: “We started to write for one month; we were always on location with the refugees and we met many victims. Girls who escaped from ISIS. For me, it was the first time to do a project like this. We felt everything with them, and we developed the story with the real stories that we heard every day.”

The local industry is still malleable enough that it can adapt easily to the surrounding environment, but this is also because it doesn’t have a choice. What’s happening in Iraqi Kurdish cinema right now represents an intricate blend of art and foreign relations. Several local filmmakers will draw parallels between their work and that of the peshmerga, or Kurdish soldiers. They see the telling of their stories and the sharing of their history and struggles as part of a larger fight for survival. This sense of higher purpose is imbued in every project and fuels the future of their local filmmaking scene despite great obstacles.

Photo of Hussein Hassan (right) and actor on the set of Reseba by Emma Piper-Burket.