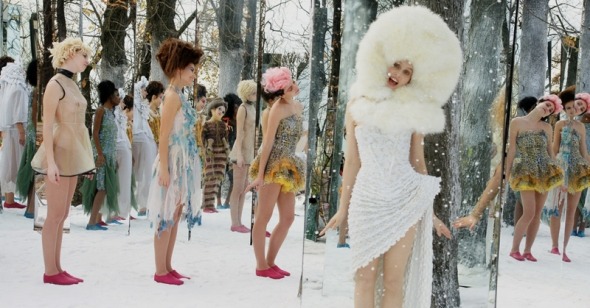 A Night at the Museum
Fernando F. Croce on Face

Face plays April 19, 2015, at Museum of the Moving Image as part of the retrospective Tsai Ming-liang, presented with support from Taipei Cultural Center of TECO in New York.

“To love,” toasts Jeanne Moreau about a quarter into Tsai Ming-liang’s Face. The setting is a cavernous dining hall in the Napoleon III Apartments section of the Louvre Museum and the others raising their glasses are fellow François Truffaut muses Fanny Ardant and Nathalie Baye, the latter having moments earlier popped up from underneath the lavish table. Wackiness does not necessarily spring to mind when thinking of the Malaysian-born, Taiwanese-raised Tsai, whose films—beginning with his feature debut Rebels of the Neon God and extending to experimental shorts like Journey to the West—feel like the sheer soul-crushing weight of the world is forever bearing down on them. And yet this fleeting interlude featuring the trio of Gallic art-house doyennes hums with palpable giddiness, with the tickle of a cinephilic in-joke shared among friends and, more saliently, with a delighted sense of human connection. When the camera returns to this room, it finds it vacant except for the faint, off-screen sound of Moreau singing. Here today, gone tomorrow. Only a filmmaker so obsessed with life’s leaden materiality could also be so sensitive to its emotional evanescence.

This paradoxical interplay keeps the viewer in a constant state of unbalance, as evident in Face’s opening shot: a stationary view of a café’s window, with faceless reflections coming and going until the focus slowly shifts to reveal a lonely figure sitting before an espresso cup. Next seen, the man (named Kang and played by Tsai’s longtime leading man and alter ego, Lee Kang-sheng) is at home under blue bed covers, lying awake and listening to the rhythmic chopping sound emanating from the kitchen. Said kitchen will soon morph into a lagoon, as an uncontrollable geyser resulting from a burst sink pipe floods the apartment in a matter of minutes. Amid the sundry objects bobbing in the water is the bed on which Kang’s ailing, murmuring mother (Lu Yi-ching, another Tsai veteran) rests; her son applies some medicinal lotion on her stomach and rubs gently, until she grabs his hand and feebly guides it lower. Virtually wordless, this passage unfolds like a terse distillation of the director’s thematic motifs and filmic strategies: desolation, yearning, very long takes, eruptions, incest, the striking contrast between rigid framing and surging liquidity. The only thing missing in this Tsai primer is a musical number, an absence rectified in the very next sequence.

Suddenly, it’s Paris. An older man (Jean-Pierre Léaud) is slumped on a park bench, when artificial snow begins sprinkling over him. The forest in which he abruptly finds himself is literally a hall of mirrors, out of which steps a batch of young dancers led by Laetitia Casta, swathed in furs and with a Chinese song on her lips. (In one of the film's most affecting shots, the weathered yet smiling face of the slumbering Léaud fills the screen's foreground while the melodious, unlikely spectacle shimmers behind him—the very visualization of a dream.) Some time later, Casta materializes as a different sort of oneiric odalisque, a torch singer warbling the Panamanian bolero “Historia de un Amor” while spinning in the middle of a snowy patch, observed by a quite confused-looking stag. As in Terence Davies’s deeply personal sagas of struggle and identity, Tsai uses songs from a bygone era as a rush of illusionist joy that can only exist in the aching hearts and minds of the characters, away from yet inextricably linked to the pain of their quotidian existence. That pain is never far off: in between these blissfully tuneful manifestations, Casta appears half out of costume, dourly dangling a cigarette and staring at a mirror that she methodically covers with black tape.

It’s around this time that the startling fragments of Face begin to merge into some kind of narrative, courtesy of the impatient studio producer (Ardant) who reveals that a retelling of the Salomé myth is being shot in the Louvre. Casta’s nameless starlet plays the eponymous siren, with Antoine (Léaud) as a shambling King Herod and Kang as the transplanted Taiwanese auteur trying to hold the project together while dealing with familial loss back home. Language is just one of the many barriers the characters must face, with cinema as the potential bridge. Relaxing between takes, Kang and Antoine fumble with communication until they find a lingua franca in the names of old masters (“Pier Paolo Pasolini!” “Murnau!” “Mizoguchi!”). A work brimming with ghosts, the film is inhabited above all by the specter of Truffaut. Tsai has frequently hailed The 400 Blows as his all-time favorite film, and there’s a reverential tenderness in the way he shoots the aged Léaud. The star’s iconic beachfront stare at the end of Truffaut’s feature debut is at one point revived as Ardant (the last of the French director’s leading ladies) thumbs through a photo flipbook, and Tsai cuts from the juvenile star’s frozen gaze to the current sexagenarian in the middle of a funeral incantation. The spirit of Kang’s mother lingers in their apartment, but in Tsai’s eyes the great haunted house is the medium itself.

Still, as a self-reflexive portrait of filmmaking, Face is far closer to the demanding acerbity of Jean-Luc Godard’s Passion than to the winking cuddliness of Truffaut’s Day for Night. The film within the film is a sort of impossible entity, glimpsed only in small shards. The emphasis is on the gaps of shooting; the Louvre backdrop is luxurious, but what we see are the underground tunnels through which the actors trudge, weighted down by clunky costumes. Salomé’s dance of the seven veils is imagined towards the end as a piece of vampiric performance art, with Casta slinking in an unbuttoned Klimt gown around hanging abattoir carcasses. (Kang himself appears as John the Baptist’s head in this gyrating tableau, with plastic sheets obscuring the rest of his body and a can of tomato juice providing the spilled viscera.) Is the sequence part of the Salomé production, or is it a fantasy from one of the characters on the set? By this time, Tsai has set up so many parallel realities—the past and the present, the living and the dead, the concrete and the imaginary—that the answer is far from obvious. To make movies here is to wander the labyrinth under the museum, a laborious and perplexing and finally ravishing act beautifully illustrated when Kang, waist-deep in subterranean sludge and followed by the deliberately visible shadow of the camera, comes upon another sublime musical number.

Set far from the humid homeland of Tsai’s previous feature (I Don’t Want to Sleep Alone), Face originated as part of a program of cinematic projects commissioned by and filmed in the Louvre. As with his recent films (and with Michelangelo Antonioni’s later ones), virtually each shot is an autonomous set piece, not so much building blocks in a linear storyline as visual-aural objects whose splendor works to mitigate the pervasive mood of despair. Such a description may suggest frigid installation art, when in reality each of Tsai’s immaculate compositions shivers with emotion: Kang’s wordless, behind-the-bushes encounter with an unidentified man (Mathieu Amalric), their tryst interrupted by the chirps of a cellphone bringing tragic news; a marvelously sustained two-shot of Ardant and Léaud embracing in his dressing room, their characters looking into a mirror while whispering about the absurdity of their love; a close-up of a face encased in a mask of plaster bandages, immobile yet still roused by the aroma of food; Casta and a costar (Norman Atun) flirting in the dark, the screen illuminated by tiny lighter flares. Each of these sequence-shots is a mini-movie, immersive and visceral. Summarizing Tsai’s obsessions while sharpening his style, Face is ultimately the ideal Louvre film: an entrancing and unnerving tour of one gallery after another, each image a work for viewers to lose themselves in.