On the Margins: The Films of Patrick Lung Kong 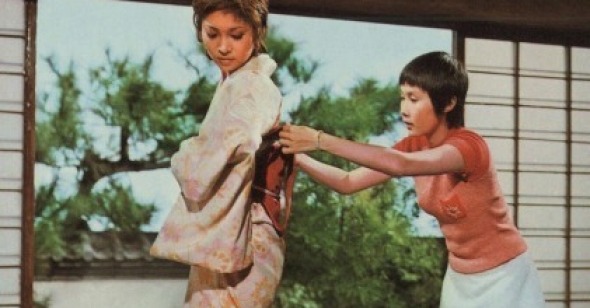 On the Margins:
The Films of Patrick Lung Kong
by Andrew Chan

Film critics are in the habit of treating didacticism as a mortal sin, as though it were a violation of a visual medium’s imperative to show rather than tell. But if the critical community’s collective prejudice against the “message movie”—with its allegedly convenient solutions and self-satisfied sanctimony—becomes rigid dogma, then it will miss out on works such as those by pioneering Hong Kong filmmaker Patrick Lung Kong. It’s hard to imagine Lung’s earnest melodramas about teenage delinquency, prostitution, public health, and war ever coming back into vogue, but viewers today who look beneath the moralistic veneer will find a window onto the anxieties that defined a transitional period in both Hong Kong society and cinema in the late 1960s and early ’70s—an era marked by newfound economic prosperity, swift Westernization, anti-colonial riots, and the rapidly dwindling presence of Cantonese filmmaking. Lung began directing with the hope of addressing these issues and raising Cantonese cinema’s profile at a time when Mandarin-language releases dominated the market, stalling the development of Hong Kong’s culturally specific film tradition. He stopped after only thirteen years and fourteen films—a small number by the local industry’s notoriously relentless production standards—but in spite of its brevity, his directorial career (which stands alongside his long filmography as an actor) remains a powerful example of how sociopolitical agendas, commercial impulses, and aesthetic ambitions can serve one another.

When it comes to long-winded sermons, Lung could give even Stanley Kramer a run for his money. In his two most widely acknowledged classics, the early-career successes Story of a Discharged Prisoner (1967) and Teddy Girls (1969), a straight-laced male authority figure makes a final-act appearance to contextualize the criminal protagonists’ misfortunes within a complex ecosystem of social problems. On the surface the tone of these speeches doesn’t seem much different from the platitudes found in Cantonese films of the 1950s, which tended to promote social consciousness more than their luxurious, big-budgeted Mandarin counterparts. But unlike the straightforward, PSA-like melodramas of filmmakers like Ch’un Kim (a Hong Kong film industry veteran who served as Lung’s mentor), the action preceding these sermons is riddled with so many dissonances, that there’s no way for us to feel any sense of complacency or self-satisfaction.

All you have to do is compare these paternalistic closing speeches to the films’ hot-blooded, sensationalistic opening sequences, and you realize just how many contradictory registers Lung’s work operates on. From the beginning, it’s clear that no matter how much he wants to teach us, he is first and foremost an entertainer, ready to bait his audience with eye-popping spectacle. Discharged Prisoner begins with a white-knuckle heist gone wrong before transitioning to a slinky interlude featuring a masked woman gyrating in front of a revolving globe. Similarly, Teddy Girls revels in the sight of young women showing off their new go-go moves, a celebration of adolescent sexuality that abruptly breaks into violence.

The more profound contradiction in Lung’s films is not one of style or content but of temperament. While there’s a strain of delicately hopeful humanism in his films, what ultimately shines through is an unmistakable pessimism about the world’s ability to reform. For Lung’s characters, the likelihood of redemption is low, and one false move can ruin an entire life. An improbably conscientious blueprint for Hong Kong cinema’s lurid crime-film legacy, as well as the key inspiration for John Woo’s A Better Tomorrow, Discharged Prisoner is mournful in ways that its mostly conventional crime-film plot tends to obscure. After being released from a fifteen-year sentence, titular hero Cheuk-hong tries to avoid falling back into the criminal underworld but is immediately embroiled in a series of challenges and setbacks: he discovers his fiancée has entered into an affair with his old triad boss, the irresistibly sinister One-Eyed Jack (Shek Kin, who played the iconic villain in Enter the Dragon); he gets fired from his first post-incarceration job after his employer learns of his criminal past; and he must figure out ways of keeping his release secret from his beloved younger brother, whose rejection he fears.

Patrick Tse plays the hero with the fatigued solemnity of someone who has already reconciled with the fact that life seldom offers second chances; in its pared-down expressiveness, his performance stands in stark contrast to that of Ti Lung, who exudes charisma in the corresponding role in A Better Tomorrow. Also unlike Woo’s blood-soaked update, Discharged Prisoner gives over large swaths of screen time to Hong Kongers left behind by the economic boom of the 1960s, depictions of poverty that Lung stages with neorealist grit and immediacy. Our awareness of communal responsibility is gradually sharpened: if Cheuk-hong finds himself unable to reintegrate into society, it’s because the odds have been decisively stacked against him, along with a wide range of untouchables—not just ex-convicts—marginalized by Hong Kong’s rapid industrialization, which erected many of the looming skyscrapers that serve as the film’s most alienating backdrops.

Lung’s camera roams across the extremities of a fractured urban landscape, from the sleekly modern interiors of Hong Kong offices to the city’s dimly lit back allies, from the Westernized fashions of white-collar workers to a lonely amputee who roams the streets on a dolly. But as is common to all his best work, the film is most moving when it homes in, with just a handful of subtly rendered details, on the tragedy of a disintegrated family structure. There’s nothing more heartbreaking here than the cold way Cheuk-hong’s elderly mother dismisses him upon his return, or how his callow younger brother remains blind to his suffering and sacrifice. These aren’t elements of the plot that are dramatized at length, but they suggest a disruption in the social order greater than any of the societal ills enumerated in the film’s final speech.

Made two years later, Teddy Girls showcases a more dramatically intense and stylistically virtuosic Lung, wielding an up-to-date aesthetic of fast cuts and zooms to explore the causes and consequences of female teenage rebellion. Emerging from a trend of youth-oriented entertainment in the late 1960s, one that also produced Chor Yuen’s Romance of a Teenage Girl and The Joys and Sorrows of Youth, the film is exuberant yet cautionary: it provides a veritable compendium of the era’s youth culture—from chic hairstyles to early rock ‘n’ roll—even as it suggests these new fads are the symptoms of moral bankruptcy. Teen idol Josephine Siao, one of the definitive stars of the period, plays Josephine Hsu, a wild-eyed, pony-tailed heroine who ends up in a correctional facility for young female delinquents after fighting with two hoodlums who harass her at a nightclub.

As if in defense of his pugnacious protagonist, Lung wastes no time explaining her fury with depictions of her chaotic home life, which tumble out at the viewer in a string of inventively mounted set pieces. In one slyly surreal scene, Josephine and her fellow inmates watch a love scene on TV, and the image almost imperceptibly transitions to Josephine’s mother making love to a new husband (played with slimy, slick-haired bravado by Lung himself). Not long after, Josephine receives news of her biological father’s death, and her emotional desolation is echoed by the hollowness of the family’s strenuously stylish upper-middle-class home, which cinematographer Chiu Hung shoots with exaggerated angles that make Josephine look as if she might be swallowed up by the furniture.

Moments like these examine the generation gap as intimately as anything in the film’s most obvious American forebear, Rebel Without a Cause, or in the many portraits of disaffected Hong Kong youth made in its wake, like Patrick Tam’s New Wave masterpiece Nomad. It’s also refreshing to see commercial cinema of this era with such a feminist kick: Teddy Girls bears witness to the emotional neglect, sexual objectification, and economic disenfranchisement these characters face without turning them into an undifferentiated sea of victims. If this film finds Lung hitting that elusive sweet spot between entertainment and activism, it’s dwarfed by the go-for-broke ambition of two overpowering apocalyptic visions, Yesterday, Today, Tomorrow (1970) and Hiroshima 28 (1974).

In these grim 1970s dramas, Lung orchestrates onscreen action as if in a state of emergency, and the fatalistic strain in his work becomes more pronounced. The Camus-inspired Yesterday, Today, Tomorrow charts a fictional health crisis caused by a rat infestation. Hong Kong shuts down and descends into mass hysteria, families are quarantined, and the Chinese world’s urban emblem of modernity becomes a hotbed of lunacy. Few films before it had ever looked upon the claustrophobia of Hong Kong life with this much revulsion: in his predominantly interior shots, Lung barely gives his audience any breathing room, crowding our vision with cramped quarters and faceless skyscrapers. Though the film exists today only in a mangled version cut down from its original two hours to a mere 72 minutes, the manic pacing caused by the censors’ haphazard editing doesn’t feel inappropriate—unlike the tightly scripted narratives of Lung’s earlier films, Yesterday is constantly threatening to spiral out of control.

Hiroshima 28—shot on the twenty-eighth anniversary of the atomic bombings—was also met with general disdain by Chinese-speaking audiences, who felt it was overly sympathetic and didn’t sufficiently account for Japan’s war crimes. The film follows the unraveling of a Japanese family after the patriarch reveals to his children he is a bomb survivor, leaving his soon-to-be-married daughter fearing that she has inherited the aftereffects and that her fiancé will reject her.

Like Yesterday, this is a film fueled by chaos: the narrative jumps around impatiently between subplots, the cast is often given to histrionics, and Lung boldly throws in red-tinted reenactments of the bombing and its gory aftermath to underscore a disconnect between the open savagery of the past and the surface tranquility of the present. As if this weren’t disorienting enough, there’s also the matter of the film’s awkward cultural ventriloquism, with Hong Kong stars (including Josephine Siao) playing Japanese roles.

Despite (or maybe because of) its rough edges, Hiroshima 28 plays like an authentic cry from the depths, and it exhibits how fully Lung had mastered the use of shock effects to sincerely motivated, emotionally honest ends. Not only does this ugly open wound of a film contain his most heartrending accounts of grand-scale family implosion, but it also shows him reaching a dead end with his hopeful humanism. In one crucial scene, the leukemia-stricken protagonist (Siao), fearing she has inherited the effects of the bomb from her parents, hits the streets in tearful protest. Lung views her antiwar proselytizing as both necessary and futile, as if he can’t figure out whether she’s crazy or, under the circumstances, terribly sane.

The moment may be brief, but it’s a groundbreaking one in both Lung’s oeuvre and modern Hong Kong cinema; you can feel the habitual didacticism of old-fashioned Cantonese melodrama (a tradition Lung extended and deepened throughout his work) yielding completely to the painful ambiguities that had always been simmering beneath the surface of his films. Looking back on his short but extraordinary career as a director, from its beginnings in modest genre thrills to this enigmatic, often inscrutable confrontation with an international tragedy, it’s difficult to ignore Lung’s instrumental role in the modernization of Hong Kong cinema. Pedagogical in premise but bold in conception, his best films resonate beyond their cultural and temporal specificities, revealing the ferocity and idiosyncrasy of an artist.

Yesterday, Today, and Tomorrow: The Cinema of Patrick Lung Kong played at the Museum of the Moving Image August 15–23, 2014.