The Phantom of the Opera 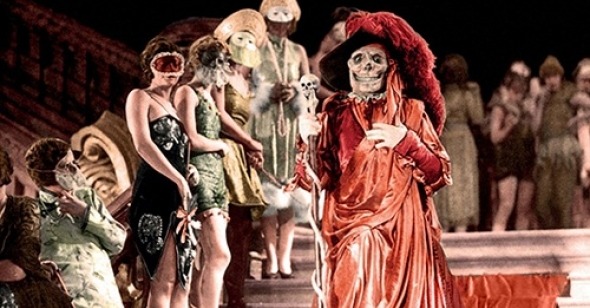 There is, of course, no phantom in The Phantom of the Opera (please accept my apologies if this constitutes a “spoiler”). There is a human man: Erik, a self-taught magician and composer, brilliant, but mentally deficient from birth, tortured by the French government and exiled to Devil’s Island for being “criminally insane.” He escapes and returns to the scene of his suffering, the medieval torture chambers beneath the Opéra Garnier in Paris. Even though he is all too real, there is much talk in the opera of curses, magic, haunting, and the like to describe Erik’s terrible revenge. But despite playing up the fantastical and grotesque elements of the story to such an extent that it vacillates between truly terrifying and ever so slightly camp, what the 1925 film of The Phantom of the Opera never does is to lose sight of the real.

The author Gaston Leroux (of whose 1910 serialized novel this film is but the greatest of countless adaptations in cinema, music, theater, television, and comic books) was a crime writer, who had invented with his Mystery of the Yellow Room the original “locked room mystery” later purloined by Agatha Christie and John Dickson Carr, among others. Leroux’s taste tended toward detective procedurals that carried a suggestion of the metaphysical—people apparently disappearing into thin air, strange forces at play, inexplicable mysteries—but always ended with a rational explanation. Elliott J. Clawson’s screenplay for Universal’s silent adaptation of The Phantom of the Opera, despite the source material being a melodrama and not a crime story, retains something of Leroux’s sensibilities in this regard, as well as his basic plot. This respect for the rational is challenged by the uniquely virtuosic expressionist acting of the film’s remarkable star, Lon Chaney (in his last film for Universal before defecting to MGM). From the start, nothing about Erik’s behavior is outwardly rational—he is an early prototype of the psychopathic monster—yet during the last third of the film, Chaney's demonstrative performance is punctuated by sudden moments of stillness and contemplation. By his magnetism, his ability to captivate and manipulate the audience, he will dare us to imagine what it must be like to be him. Put simply, the shock of suddenly finding yourself warming to Erik can be oddly pleasurable. Later adaptations such as the 1943 musical version with Claude Rains and of course, the Andrew Lloyd Webber stage behemoth, tried to harness this sympathetic dimension overtly, but ended up playing down the horror. This is not something Chaney’s Phantom will ever be accused of.

The version of the film we watch today is essentially its third incarnation. The production itself was complicated by irreconcilable creative disputes between Chaney (with other crew and cast members taking his side) and Rupert Julian, the New Zealander hired to direct it by Universal's founder/boss Carl Laemmle. Julian was fired before the film had finished shooting, but the resultant cut (finished by Chaney and locum director Edward Sedgwick) didn't pass muster with the preview audience, spooking the studio into drastic alterations. Further sequences were shot (including, apparently, more of the antics of silent comedian Chester Conklin as an orderly) to lighten the tone, but this second cut was also a disaster with test audiences—who felt it dragged—and was scrapped. Rupert Julian justly retains the director's credit because the final version reverts back to the original gothic melodrama he had been hired to make, albeit substantially fine-tuned by Chaney, who by then had taken creative control of the project, thereby ensuring that the tragic aspects of Erik's downfall took center stage.

Questions of influence are always murky and harder to prove than they are to observe, but one need only to consider the fundamentals of The Phantom of the Opera to appreciate its status as a veritable template of horror cinema. The suspense, located solely in the appearance of the antihero himself, is so meticulously crafted: the “Phantom” is announced by the title of the film; then discussed as a ghostly presence in discomfiting detail (“his face, a skull…with yellow skin tightly stretched across his bones”); he is then seen only in silhouette; then from behind; later he speaks; then he is finally seen in the flesh, but masked! The revelation of the mask itself—all white, attaching a flap of fabric over the mouth which rises and falls with his breathing—is already too much for the object of his affections, the opera starlet Christine (Mary Philbin) to bear. Of course, she ain’t seen nothing yet . . .

In the meantime, elements of slapstick humor (the janitor's brief but impeccable Harold Lloyd routine) and dramatic irony (the Opera's new buyers scoffing at the outgoing owners' hit-and-run comment about the "ghost in Box 5") serve to puncture the shroud of anguish that envelops the first half of the film, much as modern slasher films are wont to do by having their young characters lark around, oblivious to the peril we’ve all paid to see them suffer; it’s a complicit “I’m on your side” nod to an expectant, increasingly excited audience. What also stamps the film on one’s memory and repays a big-screen viewing, is the sheer scale and potency of the sets, designed by Ben Carré, coupled with the grandeur of Charles Van Enger’s photography. The Phantom of the Opera was not a cheap film (over $1 million, exorbitant for the time) and it shows; the level of detail in certain crowd scenes is staggering. The culmination of this ostentatious visual experience is the two-strip Technicolor bal masqué sequence, wherein Erik poops the party outrageously by appearing as the “Red-Death”—a nod to Leroux’s lifelong ambition to be mentioned in the same breath as his idol, Edgar Allan Poe—before escaping across the rooftops of Paris, his crimson cape billowing behind him.

No description of any Phantom of the Opera adaptation is legitimately complete without an analysis of the unmasking sequence, and this is in no small part due to the unsurpassable impact of this pivotal moment in the 1925 version. Having endured with Christine her own fascination with what lies behind the camouflage (she is entranced and hypnotized by Erik, who casts himself as her “master” and takes her to his underground hideout), we tremble with her as she approaches him from behind while he plays his own composition on the organ: “Don Juan Triumphant.” As she rips off the mask, time stops. The whole film seems to lose its balance and fall over. As an audience, we’re torn out of the story and thrust into a momentary realm of pure revulsion. It might have been enough to let us see what we see and simply suffer, open-mouthed, but in a stroke of flair, as Erik wheels around to confront Christine, the camera goes out of focus—almost as if it needed to rub its eyes in disbelief, or as if a feeling of nausea had overcome it. As always, the makeup design was Chaney’s, but this diabolical mutation is not purely facial. The unmasking, coming precisely halfway through the film, triggers a deliberate and complete transformation in Chaney’s performance. Having begun the film as a ghostly, faintly creepy, slow-moving conjuror, he has now been liberated into his true self: a violently demonstrative overlord, gesticulating and emoting demoniacally, remorseless in his anger and wholly uncontrollable: a cornered beast with the face of Death.

Chaney’s particular physical expressiveness was forged from his upbringing by deaf parents, and his acting was inextricable throughout his career from his talent with makeup—he was the original grand guignol (big puppet) made flesh. Few silent actors (Chaplin is another) have had such a potent impact on their audience, such an innate ability to suck out the viewer’s peripheral vision. Horror cinema would try time and time again to recapture that visual primacy in its protagonists. Universal itself gave us Bela Lugosi’s Dracula (a clear descendant); Boris Karloff’s Frankenstein (ditto); and The Wolf Man, which starred none other than Lon Chaney Jr. More recent success stories include the characters of Freddy Krueger in A Nightmare on Elm Street, Pinhead in Hellraiser, Leatherface in The Texas Chainsaw Massacre, and Mr. Barlow in Salem’s Lot. But if Erik is horror’s great progenitor, it’s surely because of Chaney's ability to make us want to see behind his mask.

From the moment The Phantom of the Opera enters this new, post-suspense dimension, it becomes a nightmare from which the characters (Christine, her sappy boyfriend Raoul, and a mysterious Persian who turns out to be a detective on Erik’s tail) are aching to wake up, but also a prolonged look into Erik’s tortured soul. Chaney, who had already played a more instinctively sympathetic monster, Quasimodo (in Universal’s The Hunchback of Notre Dame, two years before), audaciously alternates the horrific and the pitiful: one moment he is acting for the back row of the stalls, the next he pauses in close-up to weigh his predicament and his actions, his vile face fallen, becoming almost childlike, momentarily stripped of all intimidation. In so doing he intensifies our feelings for this monster, such that his disfigurement and his behavior are both seen for what they are: afflictions. Subjecting Raoul and the Persian to ingenious death traps involving heat and water, Erik tries vainly to extract a declaration of love from Christine in return for their lives. It may take more than one viewing to fully grasp the sense of pathos that suffuses the story as Erik captures Christine one final time and careers through the streets of Paris in a barouche, remorselessly whipping his horses, while a torchlit mob gathers by the Seine. At the film’s climax, Chaney has almost lost all control, his now pitiful visage rocks back and forth with maniacal laughter as the barouche screams through the streets. Christine jumps free and he’s left flailing wildly in the wind—we might start to wish he could be put out of his misery. When the mob finally catch him, his treatment is terrible: they engulf him and beat him to death. We’ll never see that remarkable face again, only a pathetic bald head and a crumpled carcass flung into the river in medium shot. The nightmare might be over for Christine, for us, and even for Erik himself, but for one who entranced us so, one whose presence we’ll never forget, it’s a miserable way to go out.

The Phantom of the Opera played October 26, 2014, at the Museum of the Moving Image as part of the series See It Big, co-presented by Reverse Shot.