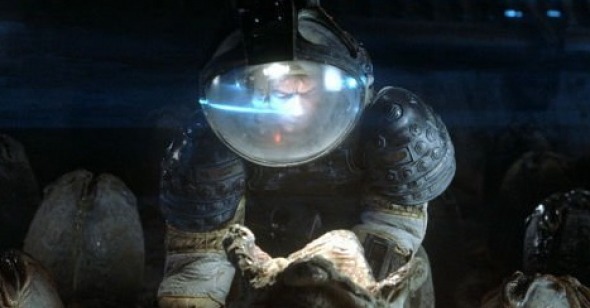 In the Dark
Damon Smith on Alien

Before I saw a single frame of Ridley Scott’s Alien, it had nested under my skin. First imprinted on my underage mind was an image from the movie poster, which depicted an asteroid-like egg hovering over a latticework of gnarled moon rock, hatching spooky green light. A L I E N, it said, in a futuristic DOS-like type treatment paired with a singularly chilling tagline: “In space no one can hear you scream.” This movie might make me die, I remember thinking, trying to comprehend the nature of its threat. This is a movie I want to see. For better and worse, I got a sneak preview at school one day courtesy of my freaky freckled pal Christian, who enthusiastically shared Fangoria magazine’s gatefold spread on the notorious “chest-bursting” scene while crushing a Wonder Bread sandwich into his maniacally elated, ten-year-old face.

When I was finally old enough to rent it on video, I was struck not by how gruesome Scott’s classic cosmic-horror flick is, but how empty the film seems at times of physical bodies, earthling or otherwise, and how controlled and terrifyingly tense its air of suspense becomes as a result of those carefully calculated absences. Alien is a film about space, quite literally—not only the ingenious way that Scott deploys his camera in the cramped air shafts and passageways of the doomed crew’s star flyer, where something unimaginably Other has hitched a ride and lurks predatorily, but also how the double-jawed menace accosts the travelers in the grim, lonely vacuum of the cosmos, a vastness that only intensifies the inescapable feeling of claustrophobia and entombment. Seeing this uniquely frightening creature feature on the big screen, where you can fully appreciate Scott’s innovative-for-their-time visual effects, deeply unsettling sound design, and eerie evocation of Stanley Kubrick’s 2001: A Space Odyssey as post–Star Wars nightmare death trip, transforms those late-night, pillow-clutching jitters into a widescreen sensory scarefest with few rivals. Alien hasn’t faded from view in the past three decades (a director’s cut was released to theaters in 2003), nor has it lost its ability to induce a sickening dread in today’s see-Saw-prone audiences, because the fear it evokes is primal and profoundly disturbing.

As the film opens, Scott’s camera glides along the darkened equator of an indeterminate ringed planet somewhere in deep space before panning the underside of a massive commercial towing ship, the Nostromo, hauling a 20-million-ton payload of mineral ore back to Earth. Inside, a crew of seven astronauts—rakish captain Dallas (Tom Skerritt, in Kris Kristofferson–grade whiskers), first mate Ripley (Sigourney Weaver), milky Lambert (Veronica Cartwright), English executive officer Kane (John Hurt), steely scientist Ash (Ian Holm), and hardhat buddies Brett (Harry Dean Stanton) and head engineer Parker (Yaphet Kotto)—emerge from pod-like hibernation chambers to learn they are only halfway home. An acoustical distress signal from the nearby planet has triggered Mother, the ship’s computer, to awaken them from hypersleep in order to investigate, a protocol mandated by Company policy. Despite some grumbling about salary shares and “the bonus situation” over coffee and cigarettes (blue-collar sympathies were rife in late ’70s Hollywood; but in space, no one can hear you complain), Dallas dispatches a shuttle to the desolate, fiercely inhospitable moonrock, hoping to ascertain the provenance of the beacon.

Alien has been hailed for its marvelously otherworldly art and production design, a distinction it earns in the stunning sequence where Kane enters the cavernous inner chamber of a wrecked U-shaped spaceship, its bone-like exhaust hoses and spines enshrining the fossilized remains of an elephantine non-human pilot, whose origins (a race of technologically advanced giants?) are never explained. (Scott is busy putting the final touches on an Alien prequel, Prometheus, that explores the prehistory of the “space jockey,” as he’s known in the lore of the franchise.) But Kane’s investigation of an egg chamber in the ship’s hull provides the film’s decisively scary turning point: something indistinct but clearly organic squirms inside one of the ovums, which hatches sickeningly. Seconds later, as Kane peers inside, an alien crustacean leaps and attaches itself to his face, coiling its whiplike tail around his throat. Back at the ship, Ash and Dallas poke at the strange bleached organism, discovering it has acid blood after severing one of its exoskeletal joints in an effort to remove it from their comatose colleague. Then the parasitic mollusk-thing releases its death grip and vanishes, leaving Kane to recover momentarily until the infamous moment—still one of cinema’s greatest gross-out scenes—when he births an alien monster at dinner via his chest cavity. Bon appetit.

Working from a screenplay by Dan O’Bannon (co-writer of John Carpenter’s Dark Star), Scott creates one level of terror around the xenobiotic evolution of the creature, first glimpsed as a fanged phallus that emerges from Kane’s exploded corpse, emitting an angry birth shriek before scurrying away like a reject from Basket Case, only to manifest later as a hulking, eel-colored extraterrestrial with a hyper-elongated head and a lethal set of retractable jaws dripping gobs of saliva. Created by Swiss artist H. R. Giger and brought to life by Carlo Rambaldi’s Oscar-winning special effects team, the titular alien (played by a seven-foot-tall Nigerian design student named Bolaji Badejo) remains half-visible throughout the film, either shot in tight close-up or in partial light, which makes it hard to identify its precise shape and physiology. Such minimalism works to Scott’s advantage. The mystery of the creature’s whereabouts at any given moment raises the stakes in the cat-and-mouse game that ensues and ratchets up the tension even more as the astronauts, armed with flame-throwers, try in vain to eradicate the invader; even the tracking device Ash invents becomes a source of constant anxiety as the wigged-out crew members follow the electronic blip through the air-locked bowels of their starship only to realize—too late!—that the unseen aggressor must be sitting right on top of them. Even when Scott resorts to cheap scare tactics (a screeching cat; a pop-up-ghoul kill scene), they are rare, artfully edited, and terrifying.

Character development might not have been a primary concern for Scott, whose talented cast seems to have had little to work with in terms of dialogue or back story apart from a few broadly sketched psychological cues, but Alien did launch the career of Sigourney Weaver, a fresh-faced ball buster in her first leading screen role as the embattled, tough-as-nails femme-naut Ripley, whose final triumphant confrontation with the intractably ferocious monster—scrambling for cover in tight cotton panties—paved the road for gutsier roles. But such quibbles are beside the point: the success of Alien as a horror film has more to do with Scott’s expert handling of spatial dynamics (low-angle shots and weaving camerawork constantly emphasize the vulnerability of the Nostromo’s human inhabitants) and special effects (the revivification of one character’s disembodied head is particularly inspired), as well as the tension he builds around Ash’s man-droid admiration for the “structural perfection” of the alien’s cell-enhancing silicon morphology. Perhaps nothing’s as unnerving as Brett’s endless trek in search of Jones the cat through empty engine rooms where dangling chains rattle and water drips portentously (“Here, kitty kitty...”), a brilliantly paced sequence which evokes nothing so much as a haunted house where some spook—in this case, a face-eating biological abomination—lies in wait.

Home entertainment systems are excellent, small-scale approximators of Dolby-equipped movie theaters, but in order to fully appreciate Alien, you really do have to see it on a towering screen and experience the uncanny sensation—enhanced by the 70mm print (blown up from 35, with added sound channels), the dissonant strains of Jerry Goldsmith’s score, and wallops of nerve-wracking sound design (especially those steam-vent emissions as Ripley escapes in the final reel)—that you are aboard the occupied ship and there is nowhere to hide. Only then, too, will the cultural legacy of Alien, which is hard to overstate, begin to make sense: the film (the fourth highest-grossing movie at the box office in 1979) was a commercial juggernaut that spawned three sequels (not to mention video games, comics, action figures, and crappy spin-off sci-fi novels for a new generation of fantasy lovers); brought H. R. Giger’s weird biomechanical imaginings into the American mainstream; and unleashed a seriously frightening wave of Lacanian, feminist, and posthumanist academic think pieces in the mid-nineties, an ivory-tower record rivaled only by Scott’s other sci-fi classic, Blade Runner. Poised somewhere between the awestruck technophilia and cold cosmic metaphysics of Kubrick’s 2001 (most directly alluded to in the film’s explosive finale) and the yee-haw escapism of George Lucas’s interstellar shoot-’em-up, Alien lingers like a bad engram, positing nothing remotely philosophical except the certainty that survival is a remorseless instinct, and that some days on the job are tougher than others. See it big.

Alien played October 27 and 29 at the Museum of the Moving Image as part of the series See It Big, co-presented by Reverse Shot.