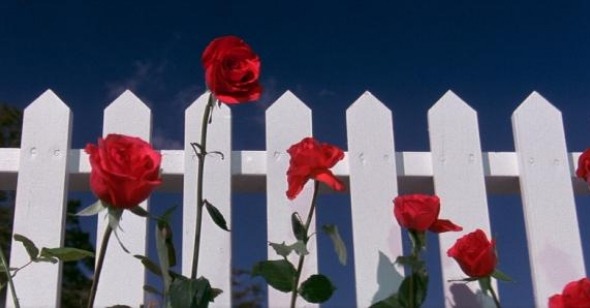 With some exception, most of the films known for critiquing American suburbia have come from the last thirty or so years: Ordinary People, The Ice Storm, American Beauty, Little Children, and Revolutionary Road to cherry pick but a few. (Yet Nicholas Ray found the potential for madness in the ’burbs back in 1956 with Bigger Than Life.) Taking into account the tonal quirks of each, all of these films tend to share a similar argumentative thrust. They see suburban living as stultifying at best, soul-poisoning at worst. The visual monotony of a given neighborhood’s cookie-cutter architecture becomes a predictable stand-in for the unthinking conformity of the community’s expectations, as well as the narrowness of the denizens’ dreams and desires. Of course, the façade of cheerful conformity slowly begins to peel away, revealing individuals with squelched hopes, in various levels of desperation and anger. In this way, suburban-nightmare films get to have it both ways. They can cast a jaundiced eye upon the conservative systems undergirding their characters’ misery while extolling the human specificity of those stuck with said systems.

David Lynch’s Blue Velvet inevitably gets lumped into the same category as these other works, and it’s not hard to see why. The film’s celebrated opening literally reveals the squirm-inducing underbelly of well-manicured middle-America domesticity. As the titular song (sung by Bobby Vinton) wafts over the soundtrack, Lynch offers a series of images almost ludicrous in their dreaminess: a tilt down from a perfect blue sky onto a white-picket fence and red roses; a smiling man in a crisp blue shirt waving from a red fire truck, Dalmatian in tow; a crossing guard guiding school children across the street. When an elderly man watering his lawn suddenly collapses to the ground, Lynch’s camera burrows beneath the verdant greenery, pushing through the blades of grass to reveal a shadowy underworld teeming with insects. Vinton’s smooth-as-silk crooning becomes replaced by the sound of bugs crunching and crawling over one another, with dissonant rumblings heard in the background. It’s on the nose to the point of parody: the suburban universe rests upon a seething mass of subterranean dimness and wormy impulses, ready to explode to the surface at any moment.

They are indelible images, no doubt, but also ones that tend to become simplified out of context. For those who think of Lynch’s 1986 masterpiece as the Rosetta Stone of more recent—and strident—screw-the-suburbs screeds, it’s worth looking again at how Blue Velvet offers a far more complex and hallucinatory vision than even its hallowed reputation might suggest. Lynch thoroughly blurs the line between the malice at the murky heart of the American middle-class dream and the so-called virtue of those living within its confines. Certainly, no one is really innocent in Lynch’s world. Given the disturbing amounts of sexual and emotional degradation displayed on screen, though, it’s all the more important to note that no one rests entirely outside of our sympathies—or at least our curiosities.

Light and dark meld slowly over the course of the film, with Lynch initially setting up two worlds whose moral distinctions seems as defined as their aesthetic ones. We are first introduced to the sunny streets, well-maintained family homes, and wholesome small-town businesses of Lumberton. College student Jeffrey Beaumont (Kyle MacLachlan) has just returned home here, following the sudden illness of his father (the man whose collapse we witness in the film’s opening). His reunion with the gently flirtatious high-schooler Sandy Williams (Laura Dern) would seem to presage a more permanent homecoming, but the two become united through more unsettling means. Sandy’s father is the local police sheriff whom Jeffrey sought out after finding a severed ear in the middle of a forest clearing. Though he’s told to keep his nose out of any investigation into the appendage, Jeffrey becomes enthralled with the idea of exploring this macabre mystery, particularly after Sandy tells him about a possible connection to a mysterious lounge singer, Dorothy Vallens (Isabella Rossellini). They scope out her apartment from afar, but Jeffrey insists upon gaining further access by pretending to be a pest-control man (those bugs again…), swiping an extra set of keys, and returning to the apartment later to spy on Dorothy. What he finds is the other side of Lumberton: sexual and mental abuse in sordid flats; dimly lit nightclubs; and abandoned dirt roads, far away from the protection of suburban home and hearth. Presiding over this seemingly alternate universe is Frank Booth (Dennis Hopper), a gas-huffing sexual sadist and local crime kingpin who has kidnapped Dorothy’s husband and young son in order to blackmail her into satisfying his violent mix of drug-fueled erotic desires.

The way in which Lynch handles that severed ear offers a crucial hint as to how Blue Velvet simultaneously establishes these parallel worlds and destabilizes the boundaries between them. The discovery of the bug-nibbled body part by Jeffrey constitutes one of the first obvious intrusions of Frank’s world of violent crime into the heretofore squeaky-clean universe of Lumberton. Once Jeffrey hands it over to the police, the threat remains present but contained. Later that night, when Jeffrey walks the tree-lined street on which both he and the Williams live, the ear re-appears: not as a physical presence, but rather as an amorphous image of indeterminate origin. It overwhelms the frame, blocking out Jeffrey and enveloping the camera. Then, as soon as it began, the journey ends. The film returns us to Jeffrey, who has approached the Williams’ house, and all is as it was . . .right? The answer is simultaneously “of course” and “never again.” The journey into the blackness of that ear envelops the film in an invisible bubble of perversion, in which all is exactly as it was while also being irrevocably tainted.

Such moves—unsettling in both their amorphous grounding and tonal indeterminacy—give Jeffrey and Sandy’s sun-dappled universe the ever-present stain of the bloody crimes occurring just across town. Doing so doesn’t mean that Lynch “reveals” Jeffrey and Sandy’s inherent corruption. Though Jeffrey eventually begins an affair with Dorothy in which he replicates some of Frank’s abuses (after much prodding from Dorothy), Lynch treats the young couple’s blossoming romance with a mixture of cock-eyed humor and genuine pathos. There’s an extraordinary scene midway through the film in which Sandy relates a recent dream to Jeffrey. She speaks of a world of darkness, bereft of light and love, suddenly filled with thousands of robins, bringing the warmth and illumination so desperately needed. In the context of Blue Velvet’s pitch-black sequences of criminality and violence, perhaps Sandy’s moist-eyed vision seems deluded. As delivered by Dern (a national treasure who’s rarely as spectacular as when she works with Lynch), the monologue attains an undeniable poignancy—one in which the fervency of Sandy’s hope becomes all the more moving for how untenable it seems in a world that could also house someone as vile as Frank Booth.

Booth presides over Blue Velvet like a storm cloud, foreboding even when he isn’t showering bile and blood down upon those unfortunate enough to be in his radius. He’s among Lynch’s most potent embodiments of evil, yet he cannot be dismissed as a mere cackling lunatic. What disturbs most about Frank is that his most twisted impulses ultimately cannot be separated from the cultural trappings so deeply imbricated within them. Jeffrey watches in horrified confusion as Frank sits in the Slow Club—the lounge where Vallens performs—listening to Dorothy croon “Blue Velvet,” tears welling in his eyes as he fondles a piece of her robe, whose color and fabric match the song. Never mind that Jeffrey and the audience just watched him slice off said piece of robe in a violent sexual assault that culminated with Frank humping her prostrate body and slugging her in the face when she dared to glance his way. What does a man like this find in the Bobby Vinton song, or Roy Orbison’s “In Dreams,” which he demands to hear with furious intensity? That Lynch refuses to sketch in the gaps with anything approaching psychological rationalization helps to explain how his musical and visual citations attain such a primal pull. In a manner reminiscent of Kenneth Anger, he both insists upon a connection between the “innocent” ephemerality of pop culture and the nastiest impulses of the human psyche, and embraces the aching pleasures of the very aesthetic artifacts he sheds distressing new light upon.

Like much of Lynch’s best work, Blue Velvet casts its singular spell through an accumulation of disquieting visual details and verbal fragments. This is not to imply that Lynch simply throws charged imagery in the air like confetti and waits to see where it lands. Notice the subtle brilliance of its pacing and structure, especially in the first half hour, which is made up of many small scenes. These constant shifts in physical location and time make the roughly twenty-minute sequence in Dorothy’s apartment all the more brutally claustrophobic for being so spatially and temporally contained. Nevertheless, the heart of Blue Velvet lies in its ability to ensnare us in its uncanny universe, where cruelty and tenderness rub elbows with alarming frequency, and no amount of love-giving robins can ever completely blot out the ever-creeping darkness.

Blue Velvet played August 25 and 26 at the Museum of the Moving Image as part of the series See It Big, co-presented by Reverse Shot.