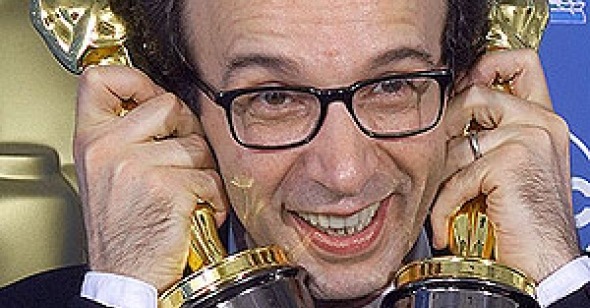 So rather than run down yet another list of "fearless" predictions about who will win the big prizes, we thought this year we'd pay tribute to our favorite past Oscar winners: you know, those movies that really make one appreciate the joy and magic of the Oscar season, when all is right with the world and everyone appreciates film as an art form.

1. "I will sell this house today!": American Beauty for Best Picture, 1999
Annette Bening doing her best Faye Dunaway impression stands out in our minds as the most blatantly horrendous thing about American Beauty, but there's so much to hate about the debut film from Sam Mendes, who has gone on to terrorize moviegoers with a succession of misogynistic, idiotic treatises on that fallow place called America. A real Alexis de Tocqueville, that one. Mendes's crassness never fails to astonish, but never more so than in Alan Ball's glibly scripted Beauty, which was so "subversive" about contemporary American values and mores that it ends up making a savior of . . . a wealthy, straight, white American male. One whose regression into pot-smoking, responsibility-shirking infantilism is honored as transgressive. One whose real estate-hawking materialist demon wife (who slaps herself in the face over and over when she doesn't excel at work) and sullen daughter hamper his happiness from every side. One who gets to die in a perfect moment of shotgun-assisted bliss, spiritually cleansed after deciding not to fuck the nubile, willing teenage girl on his couch (because she's a virgin), and while staring at a framed photo of his baby girl. One whose death is manipulated into a distasteful faux murder mystery in which everyone who's not him (a nonsensically gun-wielding shrew wife, a self-loathing gay neighbor, his black-cloaked outsider son) just might be a killer. To the unending blood-boiling of the smart few who at the time saw through this vacuous, perhaps unintentional upstander of traditional values, American Beauty is maybe the single most hateful Best Picture winner, outdoing even the insipid Crash due to its Hollywood polish and sheen, which only make its transparencies all the clearer.

For some very strange reason, the previously untranslatable, insufferable comic stylings of Roberto Benigni finally met with widespread American acceptance in 1998. Apparently all Benigni's well-honed garrulous clownishness needed was a rancidly opportunistic hook to make its way across the Atlantic intact. So Benigni couldn't just mince and shout: he had to do it amidst the horrors of the Holocaust, so that his "humor" (really just whooping) could be properly showcased as a powerful buffer against life's darkness. It's all about foils, thus—and there's never been a foil more noxiously realized than Benigni's dopey, angelic moppet son in Life Is Beautiful, who is so duped by his daddy's loving protectiveness that he's able to block out all the death and genocide going on around him. Benigni pushes this so far that he even has the child at one point "choose" to stay in a concentration camp rather than go find his mommy so that he can stick around and "win that tank" his dad's been promising him. Dishonest to the last drop, Benigni's film treats every character that's not played by Benigni into a soulless, cardboard cipher set up to bolster the protagonist's credibility as a savior. The ultimate dupes were audiences; and the feeling finally started to sink in once he catapulted on stage to collect his two Oscars and gibbered incomprehensibly for what seemed like twenty minutes.

The Academy Awards become such an inextricable part of a film's legacy that Cecil B. DeMille's three-hour advertisement for Ringling Brothers Barnum and Bailey is now generally considered a "classic" due to its win. But to put it in perspective, imagine a Best Picture Oscar going to, say, Nine, and you'll understand why this film's win is so mind-boggling: it's a parade of stars in search of a story, flaunting their attributes with all the pomp and circumstance usually afforded to Celine Dion Vegas spectaculars. It's all an excuse for show: for Cornel Wilde's athletic physique, for Betty Hutton's squinty brassiness, for James Stewart in full clown regalia, for monkeys, for trampolines, for peanuts and popcorn and crackerjack. Love triangles with showgirls, trapeze artists, and strongmen. Train crashes. A checklist of spangly stuff rather than a coherent or engaging narrative, The Greatest Show on Earth suffers from elephantiasis throughout its 152 unbearable minutes. Minus points for making a movie about the fucking circus.

4. Throwing the fairy out with the bathwater: Braveheart for Best Picture, 1995

Remember back. A long time ago....say ten years or so. Mel Gibson may have always been a limited and clearly egomaniacal actor, unable to maintain onscreen chemistry with anyone other than himself, and camera-mugging with an intensity worthy of Stan Laurel, but he was not yet a pariah. There were some years left before he would forever equate the once-adorable nickname "Sugar Tits" with anti-Semitic, splenetic benders—though in 1991 he had allegedly committed the then more acceptable faux pas of decrying homosexuality during an interview with a Spanish magazine by getting out of his chair, pointing at his ass and exclaiming "This is only for taking a shit." A few years later, classy Gibson put this cultural sensitivity into practice on-screen when, just for laffs, halfway into his bellow for Scottish freedom Braveheart he tossed in a crowd-pleasing scene of a couple of pursed-lip gays getting theirs: King Edward I heaving his embarrassingly effeminate son's "close friend" out the window to his death. Seemingly inspired by a similar scene in Monty Python and the Holy Grail, this moment is timed and edited like a true black-out sketch. Oh, and the rest of Braveheart's seven and a half hours? Garish, simplistic, and strictly for teen boys who haven't yet put away their tinfoil swords.

It took Elizabethtown for most moviegoers to finally see the sham that is Cameron Crowe's career, but when Almost Famous came out and charmed the pants and brains off of audiences, the chosen few could see that Mr. Show Me the Money was hardly the latter-day Billy Wilder he seems to want to be known as. Prime evidence was this bald-faced paean to his own coolness disguised as . . . well, it wasn't really disguised at all. Does Crowe get points for honesty in his look back at his early years as a teen music journalist whose school of hard knocks includes getting seduced by hot groupie girls and doing a lot of reefer? Not when every scene is so insufferably mounted, so artificially realized, so certain of its own devilish charm. "It's all about the music," Kate Hudson's Penny Lane intones, speaking for Crowe, it would seem, but then how come, in between the coming-of-age clichés, we get some of the worst rock songs ever written ("Fever Dog . . . scratchin' at your back door . . . "), whether intended as kitsch or not? Crowe's dreadful follow-ups to his Oscar winner (including the hilarious Vanilla Sky) have made this one of the most embarrassing awards in what would turn out to be a very embarrassing decade for the Academy Awards indeed (A Beautiful Mind, Chicago, and a certain Los Angeles character tapestry that ripped open the festering wound that is American racism).