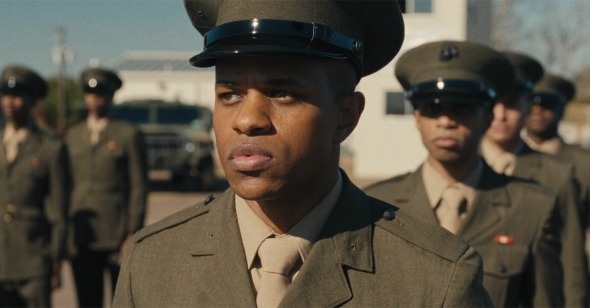 The Families We Choose
By Chris Wisniewski

In the documentary Pier Kids, director Elegance Bratton depicted a group of young, queer, mostly Black people who are unhoused and essentially live on the piers of the Hudson River on Manhattan’s far West Side. What could have been a harrowing or despairing portrait of marginalized youth, though, is instead a story of communities and families, given and made, and the ways in which those most excluded from conventional forms of power and privilege find meaningful human connections with one another. These themes run directly through Bratton’s debut fiction feature The Inspection, an autobiographical film about a queer, Black, unhoused teenager, Ellis French (Jeremy Pope, an Emmy nominee for his strong performance in the otherwise execrable Hollywood) who leaves New York City to enlist in the Marines during the “don’t ask, don’t tell” era of the second Bush administration. Like Pier Kids, The Inspection has a deeply ambivalent attitude toward the families we are given, but in The Inspection that ambivalence extends to Ellis’s chosen family as well.

Like too many unhoused queer youth, Ellis finds himself, at the beginning of the film, in avoidable circumstances. With brisk economy, Bratton quickly establishes that Ellis has a living, working mother (Gabrielle Union) with an apartment. When he shows up at her place to retrieve his birth certificate for his enlistment, though, she treats him like a dirty object, barely containing the intense homophobia that would lead an otherwise loving mother to allow her son to live on streets and in shelters. It’s a metaphorically violent and heartbreaking revelation. Throughout the film, Ellis will justify his decision to join the military in terms of the meaning it will confer on his life—a meaning that is otherwise absent, it seems, because he lacks ties to bind him to anything outside of himself. That death in a war zone is a potential cost of that meaning is beside the point to Ellis. The fractured relationship between Ellis and his mother, played beautifully by Pope and Union—he conveying a desperation to please, she a steely disappointment shaded with grief for the son she’s rejected—renders this decision legible.

After its New York City prologue, The Inspection transitions to basic training. What might otherwise play as a rote hazing narrative is complicated by the specificity of Ellis’s experience as a queer black man and the filmmaker’s as well. “Don’t ask, don’t tell” typifies a late 20th/early 21st century sensibility regarding queerness and a disingenuous political incrementalism. Ostensibly lifting a ban on LGBTQ individuals providing a useful and needed service for the country, the policy simultaneously asserted that identity and particularly sexual identity don’t matter. In its subtle critique of “don’t ask, don’t tell,” the film dramatizes the inextricability of gay sexual life from simply matters of identity. Ellis’s responses to the masculine, hetero spaces and culture of marine boot camp are unavoidably those of a gay man. A group shower stimulates fantasy and arousal. When a mail delivery brings a fresh stash of porn magazines for the other men in the unit to masturbate to at night, Ellis shares the room with them uncomfortably, because there’s no way to deny the experience as a sexual one for him. These scenes demonstrate that Ellis’s responses make him neither aberrant nor predatory; rather they serve to expose the ridiculousness of the military’s head-in-the-sand denial of sexuality. Flesh-and-blood soldiers do not conform to the policy’s neutered ideal.

With nuance and sensitivity, Bratton captures the tension implicit in interactions that have the potential of carrying a sexual charge for some while doing nothing of the kind for others. Ellis’s relationship to a commanding officer named Rosalis, played by Raul Castillo (known to gay audiences for his appealing stint as Richie in the Andrew Haigh HBO series Looking), carries this energy. Rosalis takes a special interest in Ellis and cares for him emotionally after he experiences several traumas. So, it’s no surprise that Ellis becomes infatuated with this fatherly commanding officer. Queer people who have had to function in straight spaces will recognize Ellis’s confused, longing response to Rosalis’s warm glances or the hand he places on Ellis’s leg, just above his knee, to comfort him: Are these gestures of kindness, empathy, erotic interest? Or some mix of all three?

For Ellis, however, the erotic possibility that lingers beneath the surface carries with it real danger. The Inspection traffics in an excavation of boot camp violence that will be familiar to most longtime movie viewers, but here it is also explicitly fueled by homophobia directed at a character who is unambiguously gay. It is both a genre piece and a queering of said genre in which toxic masculinity and closed systems of entrenched power conspire to break young men—arguably to turn them into good soldiers, albeit while risking their bodies and minds. These narratives typically tend to function as straight-up (pun intended) critique. Not so here, though the physical ordeals visited upon Ellis by his homophobic fellow trainees as well as the commanders seeking to make him a “real soldier” are horrific. Without diminishing the physical and emotional devastation inflicted on its protagonist, the movie also posits that the military has something, some sense of belonging, to offer the courageous young man at its center. Perhaps all families, given or chosen, have the potential to provide love and comfort while also inflicting pain. This is true of Ellis’s mother and of the marines; neither is fully adequate, though Ellis seems to need both.

While The Inspection may seem to cover well-trod ground, it is also, in being intensely personal, almost radical. Bratton’s screenplay is imbued with a deep empathy for his characters—even those, like Union’s, who might initially seem like antagonists—and his camera situates us in Ellis’s lived experience convincingly and movingly, rarely drawing attention to itself. Among its many fine qualities, The Inspection is a terrific example of why representation matters: it’s impossible to imagine another filmmaker who could have made it—not because its narrative is inspired by Bratton’s life but because he puts so much of himself into it. The movie’s climax brings to the fore the tension between Ellis’s desire to earn his mother’s love and the complicated belonging he experiences as a marine. In their sadness and defiance, the final moments mine and make accessible a lived experience that feels tenderly specific.