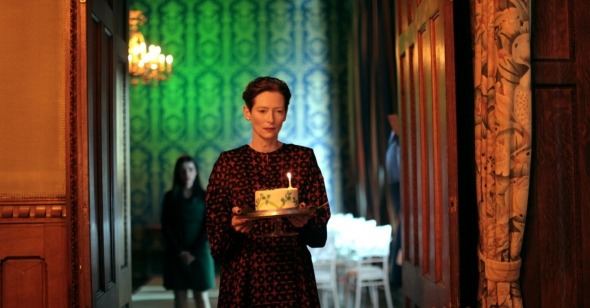 Joanna Hogg’s films don’t show us everything; in fact, they take pains to show us that they are not showing us everything, neither narratively nor compositionally. Cutting off scenes before the dialogue resolves, filming characters facing away from the camera, and eschewing explanation or the resolution of plot, Hogg focuses our attention on the unanswerable questions that define our most intimate relationships. In this sense, all her films could be called mysteries. In her most recent films, romantic love is hermetic and unpierceable: we don’t know “how [Julie and Anthony] tessellate” (to quote Richard Aoyade’s Patrick in Hogg’s The Souvenir); we never find out in The Souvenir Part II whether Anthony did or did not work for the Foreign Office; in 2011’s Exhibition, H’s instability and D’s anxiety about it are never explained. But maternal relationships in Hogg’s films may be the most enigmatic of all—the blueprint, perhaps, for all the others. Beginning with her 2007 debut Unrelated she has repeatedly mined female conflicts around maternity, and her most recent works place the relationship between a mother and daughter at the center.

This is manifestly the case in The Eternal Daughter, her latest film, shot with a minimal cast and crew during lockdown. But it’s also true in a more oblique way of The Souvenir films, which are bookended by scenes between Julie (Honor Swinton Byrne) and her mother, Rosalind (Tilda Swinton)––the second scene of the first film mirrors the second to last scene in the second, inviting us to take stock of what has changed––and in which the mother-daughter connection (and disconnection) provides a crucial emotional counterweight and narrative contrast to Julie’s relationship with Anthony. The fact that the mother and daughter in the Souvenir films were played by a real mother and daughter (Swinton and Swinton Byrne) added metacommentary on the working through of the maternal relationship. Watching a film so careful to unravel and re-ravel its own construction, we remain aware that we are seeing a real mother and daughter together, and the playing out of that dyad in both fiction and nonfiction.

Now, in The Eternal Daughter, we find another (or the same) Julie with another (or the same) mother. This Julie is a filmmaker who has brought her aged and ailing parent to a grand country house, now a hotel, to celebrate her mother’s birthday––and to find inspiration for a film about her, which we watch her try and (perhaps) fail to write. The property, we learn, once belonged to a relative, and Julie’s mother stayed there as a child for a period during the second world war––it may also have been the site of a number of other painful experiences, which emerge over the film and in particular over a birthday dinner Julie meticulously and disastrously plans. But the house is also a representation of their relationship itself, its dark corridors, lit with sickly fluorescents; its grand, anachronistic decor; its foggy exterior––the paradigmatic haunted house that we are familiar with as an architectural metaphor for the “dark recesses” of the mind. Julie and her mother seem to be the only guests of the hotel; each night they eat dinner in the dining room alone, waited on by the single surly desk attendant, played by Carly-Sophia Davies, whose indifference and hostility create several darkly funny scenarios. The two women are largely left to their own devices until, suddenly and startlingly, another person appears, unsettling the “cozy” solitude (as the mother puts it) they’ve created: a gentle man named Bill (Joseph Mydell), a caretaker of the property, who is living out his own story of grief and haunting.

This is a psychological ghost story, to be sure, with classic elements of that genre; where Hogg departs from its typical analogies, however, is in her location of the mystery not in one person’s unconscious but in a relationship with an other. The unanswerable question the film poses is whether one can see one’s mother as a separate person––the baseline for a non-narcissistic relationship––or whether ultimately the mother will always be collapsed into the child’s sense of herself. Can we really see our mothers, or are we only ever looking in the mirror?

The question of narcissism links up with the question of genre: the extent to which Julie has created this ghost story to fulfill her own fantasies about her mother brushes up against the sense we get, throughout, that the world we’re in has been contrived. This is most obvious in the casting of Tilda Swinton as both characters. The inherent staginess of such a choice—the theatrical magic of the costumes and makeup, the cinematic magic of the knitted together dialogue—offset by Swinton’s moving and emotionally convincing performances (she reacts to herself with startling ease) speaks to the formal juxtaposition Hogg has, of late, begun to foreground, between allusions to aesthetic history and the anti-theatrical, unself-conscious absorption in her films’ performances. But it also suggests the theme of mother and daughter as twins, doubles, or facets of a single self––the defamiliarization of what should properly be familiar that, for Freud, defines the uncanny.

Hogg deploys the generic touches of the ghost story with occasionally winking artifice: from the film’s first shots, we get the uneasy sense that the fog is too foggy, the moon too moon-y, the hotel too perfectly pitched as a haunted manor. Once Julie’s mother begins to disclose her memories of the house and its rooms, it becomes clear that too-muchness is part of what Hogg is going for: there’s a pained humor in the layering of traumatic recollection, as Julie reacts with dismay to the revelation that for her mother the house is not a wistful madeleine but a cabinet of horrors. That the film ends with a certain kind of resolution tells us something about how Hogg sees her filmmaking: a process of uncoiling what underpins the impulse of aesthetic creation in the first place. As with the Souvenirs, here you can sense the filmmaker asking herself, “Why am I making this?”—and insisting on it as a genuine question.