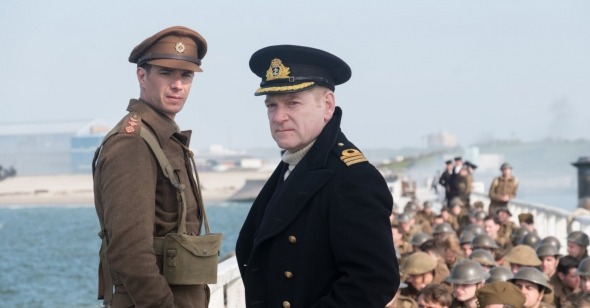 On May 24, 1940, seven months after the start of World War II, Hitler’s Wehrmacht army, having advanced into France through the Netherlands and Belgium, controlled the northern French port of Boulogne and surrounded the strategic stronghold of Calais, effectively trapping three French armies, the remains of the defeated Belgian army, various Polish and Canadian troops, and the entire British Expeditionary Force, between them and the sea. The British had been deployed to defend Belgian lines and essentially prevent the invasion of France, but had been overpowered. A plan—known as Operation Dynamo—was hatched in Dover to evacuate the British soldiers, together with other allied troops, across the Channel to England. Over the course of ten days, approximately 400,000 men were mustered on the beach at the port of Dunkirk, while the French First Army engaged the enemy in the nearby city of Lille, drawing German fire south, in the hopes of buying time for the evacuation to take place. Crucially, Hitler also ratified a halt order preventing German Panzer tank divisions from advancing on Dunkirk, preferring to leave it to his air force, the Luftwaffe, to prevent the evacuation by sinking destroyers and strafing the beach. The German strategy—albeit botched and hesitant—was nevertheless one of annihilation. What followed over the course of ten days is highly documented as both triumph and disaster, but considering the inexorable build-up of catastrophic circumstances that led to that point, it was in the final analysis nothing short of a genuine miracle.

Enter Christopher Nolan. It isn’t just that there are few other directors today capable of commanding the financial and technical resources to realize the enormity of the spectacle of the Dunkirk evacuation onscreen: a British picture on this scale, without one American voice, could never have been financed without Nolan’s attachment. But if there’s one thing this filmmaker has proven unable to resist, it’s a chance to grapple with the impossible. How do you investigate a murder when you’ve lost your memory? How do you use science to create the perfect magic trick? How do you make someone who has no superpowers into a superhero? How do you get inside someone’s dreams, to discover their secrets and influence their thoughts? How do you hold a conversation with your daughter, twenty years in the past? Nolan’s philosophy of mise-en-scène demands a hyper-rationalist response to a seemingly inconceivable question. It is his calling card and frequently his undoing, but he stays resolutely true to it.

Yet something is different here. For one thing, the events being dramatized in Dunkirk are not a leap of a storyteller’s imagination, but recorded facts. Nolan’s challenge is constricted by history rather than by science; and it is complicated, morally and artistically, by the need to do justice to real life events. For another, Nolan’s obsession with exposition—a painful burden for his films to carry, particularly his highest concept pictures such as Inception and Interstellar—is nowhere to be seen. The story of these stranded men, sitting ducks on the barren beaches, is stripped down to a bare exercise in survival, in which the denial of exposition is demonstrative almost to the point of abstraction. The enemy is unseen; the background is loosely sketched out on brief intertitles at the start; the dialogue is minimal; the political and military implications are reserved only for the very end and even then, in light touch. Instead, Nolan deploys—from the very first shot—a relentless parade of expertly realized and only loosely connected suspense sequences. Each of these is intended to have the same effect, and when combined, a single overall effect: to suffocate the viewer with excitement. A line of bullet holes from a German machine gun snakes its way across a wooden door toward where our young hero (Fionn Whitehead) is sheltered; a cluster of bombs explodes on the beach in a beeline heading directly for him but stops just short (while in the near background a comrade is blown to bits); petrified soldiers stay silent in the hull of a disused trawler as anonymous footsteps stride across the deck above; more bullets riddle the hull as the soldiers cower in fear.

Each minute that goes by without a death is a victory. Yet even comparatively mundane scenes are structured as suspense as well: will Mark Rylance’s fishing boat manage to sail away under his direction before the officious Royal Navy types working their way down the dock reach and commandeer it? Will RAF pilot Tom Hardy’s Spitfire run out of petrol, forcing a sea landing like that of his comrade? One after another these sequences unfurl, draining the entire scenario of anything but the intensity and horror of the lived experiences. Anyone expecting a historical epic in the mold of A Bridge Too Far or The Longest Day, featuring a roll call of British actors saluting each other in war rooms, showcasing the political and intellectual machinations of the war, should prepare to be disappointed. (Kenneth Branagh—impeccable—does most of this work on his own.) What awaits instead is what Francis Coppola wanted Apocalypse Now to be: a “sensurramic, Irwin Allen-style experience.” And Nolan gets much closer to this than Coppola did—perhaps because Coppola just couldn’t help but make something better.

Hawks and Hitchcock, both filmmakers who drew on their silent film backgrounds to notable effect in their talkies, must figure highly in Nolan’s film collection. A classicist rather than an innovator, albeit one with an unnatural grasp of the visual impact to which modern audiences respond, Nolan shot Dunkirk on large format film (65mm/IMAX) and designed it to be presented as such, the better to harness the immensity of the landscape (not to mention the size of the cast: how many contemporary films employ this many extras in preference to using CGI?). Furthermore, Nolan plunges the audience deep into the maelstrom by immersing theaters in strident gunfire and the fizz of ricocheting bullets—owing a debt to Gary Rydstrom’s sound effects work on Saving Private Ryan. Underpinning this morbid cacophony is the constant ticking-clock beat of Hans Zimmer’s score, suffusing the action and operating symphonically with the soundtrack’s diegetic effects, creating for most of the film’s duration an unyielding wall of sound which is at times pointedly assaultive (Nolan proudly calls it “a fusion of performance, sound, and score” but some viewers might call it a headache).

From out of this cauldron of noise, three distinct stories emerge: the first of a young soldier and his comrades seeking the quickest way to evacuate; the second of Rylance’s civilian and his two boys, compelled to sail to Dunkirk and pick up as many men as they can (including a shell-shocked Cillian Murphy, desperate for Rylance to turn the boat around); and the third with Hardy, reprising his roles as both Bane and Locke, muzzled by his radio in the cockpit of his Spitfire, hunting down German planes before they reach their targets. Each of these stories is told across different time periods—a week on the beach, a day on the boat, an hour in the plane—but they are wholly interspersed in the telling (such that we distractingly see Cillian Murphy twice, out of chronological order). For all that it achieves, this temporal conceit could better be described as “neat” rather than structurally pivotal, but it reinforces the film’s preoccupation with time: the central dramatic component for Nolan of the Dunkirk story.

The principal ingenuity of Nolan’s screenplay (written on this occasion without his brother, Jonathan) is to have based each little sequence of his three stories on recorded testimonies he had researched and/or collected first hand. Beyond the injection of veracity and the emphasis on survival that this approach brings, it contributes to a high level of arresting visual detail, including some of the most understatedly beautiful images in Nolan’s cinema: soldiers sleeping in the shoreline spume; a destroyer, slumped on its side in the surf while men drop like ants from its listing deck; a downed German Messerschmitt tumbling slowly through the air pursued by a plume of smoke, before silently vanishing into the Channel. When the viewer's heart rate has returned to normal, it is these pictures that will remain. The film’s climax, renewing the audience’s acquaintance with the most celebrated component of the Dunkirk story (the “little ships”), is wonderfully simple and classical and all the better for it. Zimmer under-cranks the ninth movement (“Nimrod”) of Elgar’s Enigma Variations to about 1/32nd of its speed, while Branagh gets his own Jurassic Park, eyes-widening moment—which he executes perfectly—as a vast flotilla of yachts, paddle steamers, RNLI lifeboats, pleasure craft, Dutch coasters, Isle of Man Steam Packet vessels, and Royal Navy frigates fill the screen. The elderly gentleman behind me in the screening was audibly sobbing. Thanks to this staggering mobilization of civilian vessels, 330,000 of the men were saved.

But lest we get carried away by this sudden upcurrent of patriotism, Nolan—ever fine-tuning and retooling—takes time to show us the murky aftermath too. Excerpts from Churchill’s speech about “fighting on the beaches and on the landing grounds” are read over the closing images by the hesitant young squaddie, not by an orator; and he doesn’t omit the passage at the start about Dunkirk being a “colossal military disaster.” There is even a facetious coda reminding one of the end of À bout de souffle (when the policeman lies to Jean Seberg that Belmondo’s last words were that she was disgusting): a cynical soldier (Harry Styles) despairs that one of the volunteers who greeted the men on his return to England couldn’t look him in the eye—a man whom the audience knows is blind. Tonally, Dunkirk’s refusal to surrender wholly to mawkishness is acutely well judged.

Nolan’s unshakable faith in his draconian storytelling mechanism proves once more the boldness (vindicated or otherwise) of this supremely confident filmmaker. He shares with Spielberg a determination to make extremely commercial films, but precisely in the way he wishes to make them, with no concessions to prevailing orthodoxy. The box office numbers of the Batman trilogy may be the only proof he requires of his success in this regard, but until now, his stubborn auteurism has foisted upon audiences a surfeit of heavy psychodrama, cinematic doggerel, and narrative stodge where the excitement (which he has always shown himself capable of engineering) should have been. Whether stung by criticism or simply seeing things more clearly, Dunkirk represents a bend in the road for Nolan: a purification of his filmmaking through a deliberate discarding of heavy-handed, bombastic editorializing; in Dunkirk, the characters disappear into the collective, resembling a hive whose only motivation is simply to stay alive.