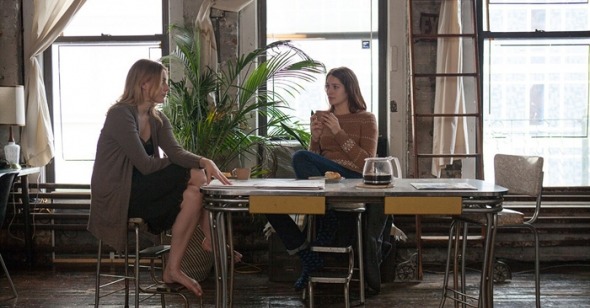 One case for the prosecution against Noah Baumbach was recently laid out by Serge Bozon. The self-styled rogue director prides himself on combining seemingly irreconcilable tonal and thematic elements in films like La France and Tip Top, works whose audience, in his words, is “unidentified.” In an interview in Film Comment, Bozon seized on Baumbach’s Frances Ha as “the exact opposite of what I want to do. People see it and tell themselves, oh great, we’re post-students, we’re vaguely marginal, we don’t make a lot of money, but we’re fragile and touching and we all have artistic desires. The relationship to the audience is very demagogical. It’s an insider, nostalgic film, with a very negative relationship to cinephilia and the New Wave used as pleasant identifying signs that rub you the right way.”

Does Frances Ha cozily appropriate Georges Delerue’s score from Truffaut’s A Gorgeous Girl Like Me to rub cinephiles the right way without having to contribute anything more? Are Baumbach’s films generally cozily insular and meant only for a myopic, self-selecting group? It’s true that they’ve cleaved to the experiences of a certain geographic and social caste: white, well-educated, NYC-centric, part of the east coast nexus of lightly worn elitism that generally shuns vocal conservatives, proximate to if not directly part of economic privilege. Mistress America is a case in point, a film about the friendship between an Ivy League undergraduate and a 30-year-old woman who can still afford Manhattan rent, a film that—save for a brief stop in brownstone Brooklyn—only abandons the increasingly expensive borough for a jaunt to a Connecticut mansion.

The tone isn’t as stable or self-congratulatory in its insularity as a detractor might claim: regardless of the variable levels of misanthropy on display throughout his oeuvre (Frances Ha is easily Baumbach’s least acerbic movie), each film is edited at a successively more relentless clip that leaves little time for casual cruelties to linger. Most scenes are pared down to their verbal essences (moments not driven by dialogue are exceedingly rare) with the effect of making their sudden endings feel like punchlines, even if what’s being shown isn’t particularly funny. The breathless editorial tempo and speed of dialogue delivery ratcheted up from The Squid and the Whale onward is inherently comic, leavening the potential for the unpalatably splenetic or merely melancholic. Mistress America is a deliberate stab at screwball comedy, and if timed with a stopwatch, it’d probably be Baumbach’s fastest average WPM film yet.

Shot more or less back-to-back with Frances Ha, with postproduction completed after this year’s other Baumbach release, While We’re Young, Mistress America flips cowriter/star/muse Greta Gerwig’s role. In Frances, she’s a wholehearted mess, all of age 27, and the film sticks strictly to her perspective as she clambers to tentative stability; in Mistress, her character is already past the point where professional accomplishment seems plausibly achievable, and she’s the subject of someone else’s story. Brooke (Gerwig) is a SoulCycle instructor and private tutor, whose wildly inadvisable plan for upward mobility is to open a restaurant in Williamsburg. Barnard writing program freshman Tracy (Lola Kirke), soon to be her stepsister, arrives in a Manhattan that isn’t what she expected. “I could be anywhere,” Tracy complains to her mother (Kathryn Erbe). “I don’t even feel like I’m in New York.” Without any social support, save from equally hapless Tony (Matthew Shear)—another writing student who feels marginalized on campus, and an ambiguous crush—Tracy calls Brooke up and gets her first proper night out in Manhattan. They meet in the godless hellhole of Times Square, and though New York clearly isn’t what it once was—much talk of jackhammers and development, both in the film and Baumbach’s interviews about it—over the course of a long night of concerts, partying, and socializing, Tracy finds in Brooke a tangible visualization of a highly in-demand young woman about town. The two are henceforth inseparable, but Tracy has a secret: while Brooke treats her like a protégé, the young student is carefully transforming the slightly older woman’s life into a short story about the obliviousness of a vibrant failure.

Tracy’s gradual perceptual reset on Brooke is explicitly stated in voiceover fragments from her short stories, the quality of which improve markedly the more she commits to surreptitiously fictionalizing her new friend. Unabashed narrative self-reflexivity is a constant: when Tracy and Tony share a night out, Baumbach cues OMD’s achingly romantic “Souvenir” right as she observes “I feel like we’re in a song.” Both scene and cue end abruptly and prematurely, underlining the inevitable failure of a night that started as a forced attempt to share a magic moment between two people who aren’t on the same page. The film is always from Tracy’s point of view, even as she ping-pongs between covert observer and active participant. This is entirely in keeping with Baumbach’s other work, which heavily draws upon his past or personal conversations: his family in The Squid and the Whale, kvetching sessions with James Murphy about Los Angeles for Greenberg, partner/co-writer Greta Gerwig’s entirely different perspective and experiences here and in Frances Ha. In a pettier register, both Frances Ha and While We’re Young contain a character, played in more or less the same register by Adam Driver each time, whose function is in part, per reliable rumor, to serve as a subtweet against not one but two filmmakers Baumbach dislikes (which he staunchly, implausibly denies).

The explicit question While We’re Young asks is to what extent dishonesty in both the production and presentation of documentary filmmaking is justified by a worthy final artistic product. That emphasis on nonfiction ethics seems like both misdirection from the targets of Baumbach’s ire and a metaphorical way to grapple with a question the director himself must often wrestle with: can callous behavior and predatory mining of one’s social circle be redeemed by artistic input? Driver’s amateur documentarian in While We’re Young may be a jerk, but pretty much everyone around him (save poor Ben Stiller) concedes the end results are worth it. Inversely, in Mistress America, Tracy is climactically shamed for the diagnostic cruelty of her fictionalized portrait of Brooke, but she remains secure in the value of the work. Both films articulate multiple tangled perspectives on the rightness or wrongness of unkind fictionalization, and both effectively end by throwing their hands up and walking away from the question without resolution. This is self-critique, but it shies away from concluding that the ends don’t justify the means: the films themselves negate that conclusion.

Even if the film builds to a shrug, Baumbach is working at an increasingly sophisticated craft and dialogue level from moment to moment. Endless amounts of near-uniformly quotable dialogue come out at a clip only a shorthand writer could keep pace with. Respites are rare, but that doesn’t mean shot composition and movement haven’t been carefully considered: like Philippe Garrel or Mia Hansen-Love, Baumbach (with his new regular DP Sam Levy) is an expert at figuring out where to place his camera in an apartment or house to make sure he can convey a sense of its whole space with minimal back-and-forth intercutting. His first introduction of Brooke’s apartment—the camera dead center in the living room, performing a casual 360 as the characters enter and settle in—is self-effacingly impressive and expertly executed. The film builds to a lengthy farcical set piece in a mansion, about a half hour in length, that sends an increasing number of characters whirling from one room to another, with minimal shot-reverse shot as actors cluster in increasingly large tableaux without seeming to have been forced to hit arbitrary marks. (Among those in the crowd is a mutely watching Hispanic maid—Baumbach may concentrate his gaze on the milieu he knows best, but he’s not unaware that people from other social strata exist.)

Mistress America is Baumbach’s purest attempt at uncomplicated comedy, but it’s also just his latest film motivated more by iterations of its characters’ weaknesses and irritabilities than plot. Here, Brooke (manically self-delusive) and Tracy (whose uncertain sense of self translates as aloof self-superiority) are equally flawed case studies, but only one of them is self-aware enough to worry about herself. “Sometimes I worry that I’m a bad person,” Tracy says, and there’s reason to believe that she well may be—but her work’s no worse for it. Baumbach’s sharply observant selective portraits of easily mockable milieus and irritating fads (here the rise of Twitter and television—“I hear it’s the new novel,” Brooke says) might seem merely peevish, films designed to appeal to misanthropes convinced of the fundamental righteousness of their abrasiveness. A deeper melancholy belies that interpretation: Tracy may have a more fulfilling career as a writer if she’s unkind to those around her. There’s nothing audience-stroking about that grim conclusion, no matter how delightful the journey is to get there.