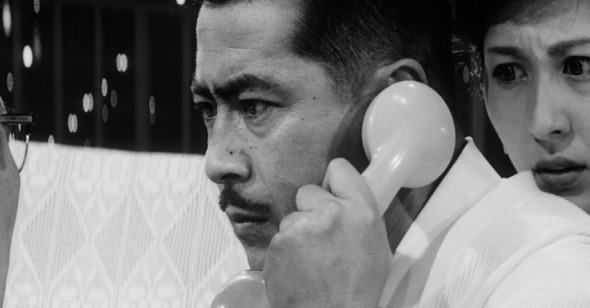 Akira Kurosawa’s Seven Samurai (1954) is renowned for its dazzling climactic action sequences, those staggered waves of assaults on the peasant village from all sides. But these scenes would probably be illegible were it not for an early scene where the samurai plan their defense of the village by unrolling a map, pointing out the cardinal directions, and visiting each barricade in turn. Similarly, in Kurosawa’s The Hidden Fortress (1958), the two battered farmers scrawl a map of the warring domains in the dirt, situating the viewer geopolitically, as it were—establishing henceforth the axes of “danger” and “escape.” Every moment of Yojimbo (1961) likewise depends on knowing where we stand with regard to the two merchant-houses at both ends of the street: the silk merchant’s is over there, and the sake merchant’s is over there. The looming awareness of these two poles is carried out to such a degree that even a nervous glance in close-up can be plotted on a map. The climax of Sanjuro (1962) requires a fairly detailed understanding of the floor plan of the estate where Toshiro Mifune is held captive, as well as the contiguous garden of its neighbor, and the communicating stream between them.

We might call this Kurosawa’s cartographic principle, employed even where actual maps are not involved: the insistence on establishing and maintaining spatial orientation not only in a scene but continuously, across an entire film. (If this sounds unremarkable, perhaps you can draw me the fortress in Grand Illusion or tell me which direction is north in a shot from The Birth of a Nation.) Because this sense of direction is kept so rigorously in Kurosawa’s framing and sequencing, we are all the more disoriented and confused when he wants to confuse and disorient us—most spectacularly in the deceptive mountain entrance to the hidden fortress, or the “fog and filthy air” of Spider’s Web forest in Throne of Blood (1957).

High and Low (1963) is a particularly emphatic example of Kurosawa’s attention to spatial continuity over the course of an entire film. The title announces one spatial organization, the vertical juxtaposition of prosperous legality—symbolized by the hilltop estate of shoe executive Kingo Gondo (Toshiro Mifune)—and the miasmic squalor and slinking resentment of the urban lower depths. But the very look of the film tells a different story. High and Low was shot using the TohoScope process, drastically widening the frame for an aspect ratio of 2.35:1. However much the social and moral themes of the film are posed along the vertical axis—in Japanese, the title is Tengoku to jigoku, “Heaven and Hell”—the images and compositions are constrained to the horizontal. Ultimately, Kurosawa is attempting to undo the vertical binary of postwar Japanese society. This “leveling,” however, is not as simple as filming in wide screen. Rather, the visual theme of the film culminates in its hard-won conclusion. In the last scene, Kurosawa arrives at a very different leveling of social space than that imagined by the diseased resentment of his villain.

The dimensions of story and image converge in the film’s exceptional application of the cartographic principle. Almost every moment of High and Low turns upon continuity of vision, or the question of what can be seen from where. When the police arrive at Gondo’s house, to investigate the kidnapping of his chauffeur’s son, who has been taken instead of Gondo’s by mistake (Gondo is held responsible for the ransom anyways), the first instruction by Inspector Takura (Tatsuya Nakadai) is to close the curtains: “This room is fully visible to the kidnapper. With a telescope, he could even see us from the streets below.” Gondo’s living room has floor-to-ceiling windows that afford a panoramic overview of Yokohama sprawling below. It is the perspective of a master—just the sort of strategic position that would be seized as an impregnable redoubt by a feudal warlord in one of Kurosawa’s martial jidai-geki. But suddenly we realize that one can also see in through these windows, transforming the grand view into a vulnerability.

This living room, with its sparse midcentury modernist décor, is the setting for virtually the entire first hour of the film, as Gondo coordinates his response to the kidnapper with the police, trying to postpone a ruinous payment of the ransom as long as possible. Because this confined space works like a theatrical stage, the manipulation of the viewer’s orientation is on a micro scale. Kurosawa’s direction here is really a feat of choreography, from the intricate blocking of the actors—where turning-away-in-shame is given every possible variation—to the corresponding dance of the camera during extremely long takes. In these scenes, Kurosawa was using a three-camera setup, as in television. So his long takes are not like Antonioni’s, which have an effect of lingering on a fixed image—rather, the compositions are continually being reconfigured, even where the actors are positioned statically. Mindful of fully utilizing the wide frame, Kurosawa will sometimes string out as many as nine heads into a shot—what David Bordwell calls a “clothesline” composition. Other times, he isolates two characters at extreme ends of an empty frame.

The narrative effect of these calibrations is a heightened scrutiny of Gondo’s responsibilities. Consider, by contrast, the effect of the Dardenne brothers’ handheld camera following just behind the hero: the deliberateness of habitual actions and encounters, and the steadiness and resolve called for when these break down. Gondo, however, is having his conscience examined in real time from every angle. The multiple-camera set-up shows none of the tact adopted by the on-screen characters. Kurosawa also works in depth to signal the ebb and flow of sympathies and tensions—for example, placing the police in the foreground to suggest their benevolent intrusiveness, or placing the chauffeur, the emasculated father of the kidnapped boy, whom no one is consulting, in the background to stress the pitiful awkwardness of his situation. If Kurosawa prefers medium shots in this sequence (whereas later the kidnapper will be filmed at much closer range), the point seems to be that there’s more room for Gondo to hang himself.

Kurosawa abruptly shifts tone around the one-hour mark. Pivoting away from the claustrophobic intimacy of the first act, he adopts the rhythms of the police procedural. The tasks of the investigation are impersonal and discrete, parceled out to many different detectives, and reassembled as a “manhunt” only after the fact. This technique of what Donald Richie calls “essay-like, analytical narration” yields sequences as discontinuous and far-flung as the first half of the film was sustained and concentrated. Nonetheless, the police work (as much as the camerawork) remains a matter of visual continuity: what can be seen from where? The police here are even literal cartographers, analyzing, on a topographic map, the payphones with sight lines into Gondo’s house. When the kidnapped child is recovered, his crude drawing of Mount Fuji, as seen from the room where he was being held, leads to a similar inquiry—what part of the coastline shows this exact configuration, where Enoshima Island is not visible but appears as part of a peninsula?

To achieve this effect of continuous orientation, in the second half of the film Kurosawa restricts the dimensions of the frame in two ways. First, he introduces a number of frame-within-a-frame compositions in which a character is set off and isolated by some architectural element, like standing in a doorway or being seen through a window. In one sequence, this device is used to indicate simultaneity via a graphic match—as when a shot through the back-window of the chauffeur’s car cuts immediately to a shot through the front windshield of a police car. The frames made by the windshields are shaped identically. A few moments later these two parties unexpectedly converge upon the kidnappers’ hideout. We were, in effect, tracing two different approaches to the same destination, signaled by the rhyme of the framing.

In the grim “Dope Alley” sequence, this technique of cropping within the frame is used to carry us further into the labyrinth of depravity. When the kidnapper follows a junkie, in the agonies of withdrawal, into a putrid backstreet, we cut to a subjective shot from his point of view, lingering over her writhing, desperate throes. The next shot is from a reverse angle, but taken from further within, through a window looking out at the kidnapper. It’s as though, having once shared his viewpoint, we are now standing deeper inside this hell.

Kurosawa also alters his framing by including film within the film: eight-millimeter footage shot by the detectives from a moving train, in an aspect ratio of 1.37:1. The police play back their own footage of the bullet train sequence (in which Gondo throws 30 million yen out of the window after confirming that the boy is still alive), but not immediately after that scene. In between the original sequence and the playback, Kurosawa inserts our first view of the kidnapper—reflected in the murk of a polluted river, just as in the final scene he will be eerily reflected in the glass of the interrogation room—as we follow him into his squalid garret. What is he doing? He is following his own story, laying out several newspapers to read about the case, then turning on the radio to a story analyzing his motives. Then he takes his binoculars and trains them on Gondo’s house, visible from his window. It is only after this detour into his perspective and his obsession with the public perception of his story that we are returned to the train sequence, now in silent 8mm. This amateur film kicks off the police’s reconstruction of the crime, which is itself an act of narration. Indeed, most of the tasks of the investigation resemble nothing so much as filmmaking: the film shot from the train is only the most obvious example. The police also engage in a kind of location scouting to discern which payphones the call could have been made from, and the “sound mixing” that sifts out the rumble of a particular train line from a recorded call.

The last scene elevates the question of what can be seen from where from a formal or narrative one into a moral inquiry. Gondo sits in a prison visiting room, face to face with the kidnapper, an unrepentant yet fragile type straight out of Dostoevsky’s Crime and Punishment. Gondo is no longer high, either physically or economically: he has been fired from the shoe company and is starting over. The kidnapper has succeeded, if that is the right word, in bringing Gondo down “to his level.” And this is clearly the worst outcome of all, eventually incensing him into seething, silent apoplexy. His last words are: “I’m not afraid of death. I don’t care if I go to hell. My life has been hell since the day I was born. But if I had to go to heaven, then I’d really start shaking.” The falsity of this resentment is a denial of vision, an insistence on worshiping his own unhappiness and summoning strangers to serve as his judges and executioners, when right in front of him is his refutation. It is only his bad faith that situated “heaven” hatefully out of reach. As he falls into a fit, the shutter comes down to leave Gondo on his side of the glass, facing only his reflection. We might say that the kidnapper’s refusal to be seen on a plane of equality—the horizontal axis of the film’s visuals rather than the vertical axis of the plot he initiated—is only the final accomplishment of “hell”: pushing away the suffering of others as an unbearable vision.