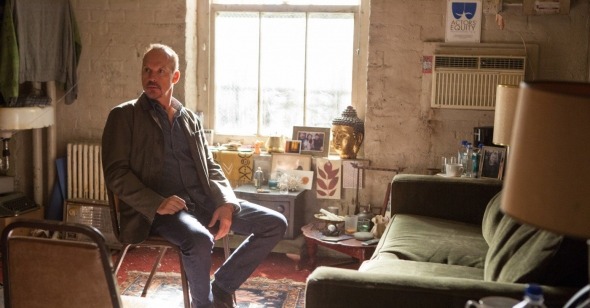 To paraphrase the title of the Raymond Carver story that is central to the narrative of Alejandro González Iñárritu’s Birdman, or The Unexpected Virtue of Ignorance, what do we talk about when we talk about movies today? We talk about technique, specifically camera dexterity (can you believe what the camera did in Gravity?); we talk about actors’ choices and methods in relation to the level of their celebrity (wasn’t that a terrific comeback for Matthew McConaughey at this point in his career?); we talk about a film’s box-office and how social media may have affected its numbers (the groundswell of tweens tweeting resulted in great first-weekend figures for The Fault in Our Stars!); we talk about auteur branding and identity and how they relate to a director’s perceived relevancy (what will Fincher or Nolan or Soderbergh do next to keep the momentum going?); we talk about CGI and realism (did you know they spent years perfecting the textural verisimilitude of that character’s fur in Monsters University?); we talk about the importance of emotional identification with characters (are we supposed to like that awful Jordan Belfort in The Wolf of Wall Street?); and, of course, we talk about mythmaking and superheroes, because, after all these are the emotionally conflicted, Hamlet-like antiheroes of our age. Right?

Birdman cleverly synthesizes these concerns into one shiny meta-movie product that functions both as a broadside against contemporary pop culture and a reflection of the egomaniacal personalities that keep the system so stiflingly, childishly naval-gazing. Leaving behind the grim, pregnant-pause-filled drama of 21 Grams, Babel, and Biutiful, Iñárritu is working in a more Charlie Kaufman mode here; this is a constantly moving, continually self-reflexive world of foregrounded eccentricity. Michael Keaton plays a manic, Michael Keaton-ish actor named Riggan Thomson, whose career has been long-stalled after headlining a nineties blockbuster franchise in which he was the superhero Birdman (the last one, we hear, came out in 1992, the same year, surely not coincidentally, that Keaton last donned a cape, in Batman Returns). As the film begins, Thomson is in the midst of rehearsals for a Broadway adaptation of Carver’s What We Talk About When We Talk About Love, which he is directing and starring in. Through Riggan’s desperate, single-minded mission to prove himself a valid artist and a relevant star, to both himself and the world, and via a slew of supporting characters also self-involved to varying degrees, Iñárritu orchestrates a story of pervasive cultural desperation, which, though it takes the ever more commercializing Broadway milieu as its subject, is clearly meant to speak to the state of contemporary cinema and the culture around it.

In other words, Birdman is cannily designed as a conversation-starter, and the director has doubled-down on his film's attention-grabbing potential via his audacious technical approach. In a stroke of genius (or promotional savvy), Iñárritu enlisted cinematographer Emmanuel Lubezki, the mastermind behind the sci-fi acrobatics of the aforementioned Gravity, to shoot Birdman in a series of intricate long takes, and with editors Douglas Crise and Stephen Mirrone, constructed those takes in such a way that it seems as though the film is largely happening over the course of one unbroken shot. It's like meticulously planning a single run-on sentence, or—to refer to a crucial object in the film—writing on one unspooling roll of toilet paper. Because the narrative spans what must be a few weeks, from the play’s rehearsals to previews to opening night, while never explicitly cutting away from a shot, the film both attenuates and condenses time. The decision is showy, but not merely so, as the sense of claustrophobia and almost continuous movement, mostly throughout the theater’s backstage and the hallways between the actors’ labyrinthine dressing rooms, makes for an effective experiential correlation to a psychological portrait of a jittery man in freefall—one who is surrounded by people going through their own states of frenetic self-doubt.

As the internally combustible center of this maelstrom, Keaton holds the screen steady despite his character’s wobbliness. It’s a splendid showcase for the actor’s trademark every-guy likeability and tooth-baring neuroticism, a mix that makes him always seem just shy of being utterly deranged. Lubezki’s camera is necessarily wedded to his intense, darting movements and glances throughout, and the film is attuned to his well-rehearsed rhythms and mannerisms (not to mention Antonio Sanchez’s strictly percussive score). Everyone else is a satellite to him, but each is nevertheless spinning off into her or his own orbit: his younger male costar, the crazily pompous, alcoholic, up-and-coming actor Mike Shiner (Edward Norton); his resentful daughter, Sam (Emma Stone), hesitantly acting as his personal assistant; his worrywort leading lady, Lesley (Naomi Watts); his long-suffering attorney, producer, and best friend Jake (Zach Galifianakis); and Laura (Andrea Riseborough), a young actress whom he may or may not have impregnated. All are game for enacting the required difficult dances with Lubezki’s camera, even if the insistent formal conceit, so reliant upon rapid-fire exchanges and constant motion, often results in scenes of actors just screaming at one another. This is especially true of Stone, who plays Sam’s bitterness with such deep-seated conviction—at one point she ends a particularly cutting dressing-down of her father’s theatrical ambitions by firing at him: “You don’t matter. You’re not important. Get used to it”—that one wonders why she sticks around at all.

Nevertheless, Sam’s grievances here underline what’s best about Birdman next to its occasionally exhilarating camera conceit. The script—by Inárittu, Nicolás Giacobone, Alexander Dinelaris, and Armando Bo—is targeted at both the small-mindedness of the Hollywood machine and the pomposity of movie stars who presume to think big in pursuit of high-art credibility. That this latter point might extend to stars of mega-budget studio garbage like The Incredible Hulk or The Amazing Spider-Man 2 who use art-house fare from lauded Mexican filmmakers to boost their credibility is an extratextual conundrum we’ll put aside for the moment: a self-critiquing Hollywood product will always try to have its cake and eat it too.

The film allows everyone to be a little bit ridiculous and takes digs at an increasingly superficial mainstream American culture without ever being misanthropic or even particularly jaded. Birdman doesn’t want to destroy anything or anyone; it simply wants to reach some sort of détente between consumer culture and art cinema, like a more accessible, Yank version of Olivier Assayas’s Irma Vep. Even the film’s potentially disastrous portrayal of a fearsome New York Times theater critic named Tabitha Dickinson, played with vivacious imperiousness by Lindsay Duncan, feels less an example of filmmakers taking swipes at critics (at a bar, Norton’s drunken Mike pulls the old “critics are failed artists” routine with her, which she swiftly shoots down) than chastising them for their increasing laziness, which is a backwards way of validating them as artists in their own right. If Dickinson is a villain, it’s only because she wields her power with nonchalant superficiality, judging things before she sees them, and per Riggan, “labeling” rather than truly critiquing. Riggan’s attempt to destroy this critic’s approach to art is not far off from Sam’s tearing Riggan apart for feigning artistic altruism in staging a Raymond Carver play that will be seen only by “white, old, rich audiences.”

So what is relevant? How do we and the film define that? What we desire for Riggan as viewers is as fuzzy as what he wants for himself. Is he trying to become the artist he always wanted to be, or is his play just a stepping-stone back to big-screen stardom? Throughout the film we hear Riggan’s inner dialogue with his superhero alter ego (his super ego?), who comes off like a hilarious parody of Christian Bale’s low-decibel, marble-mouthed Batman, and we witness his apparent telekinetic abilities, which are visible only to us when he’s alone, leaving us to assume he near-tragically identifies with and cannot emotionally escape the supernatural character that made him a star more than two decades earlier. Imagine Norma Desmond thinking back not to the silent-screen days but to the dizzy heights of rubber-suited iconhood. His fantasies are visually realized in special-effects sequences that strike as both sops to the Comic-Con crowd and as convincingly awesome CG-fueled flights of fancy.

For all its self-conscious, cutting-edge whimsy, the film is ultimately a throwback to the tried-and-true genre of the comeback drama. It hits all the expected buttons throughout, but there’s an intriguing, almost King of Comedy–ish irony to the climax: on opening night, Riggan achieves instant high-art status while also becoming an online sensation for lowest common denominator viewers—a pyrrhic victory. However, the film doesn’t end there. There’s an ambiguous final catharsis that ultimately reveals the film is more interested in validating its main character’s personal patholology than diagnosing the culture that made it that way. Birdman doesn’t offer viewers much of an alternative to the things it's poking holes in, but there is an invigorating freedom in its wanting to have a conversation in the first place.