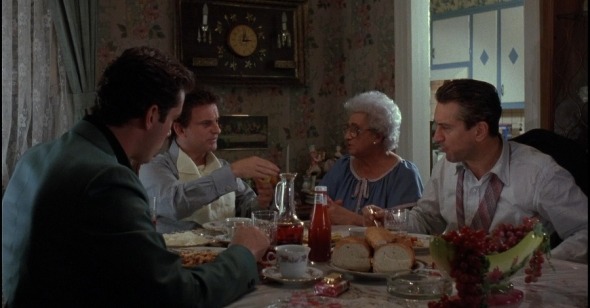 The Blueprint
Adam Nayman on Goodfellas

And there you have it: the most revealing sequence of Martin Scorsese’s most masterful movie, summed up in an offhand exchange. While I won’t go too far with the idea that Henry Hill (Ray Liotta) is a directorial surrogate in Goodfellas, his little white lie about his true vocation doubles as a thinly veiled boast on the part of the filmmaker. Coming near the end of an immaculate tracking shot through the Copacabana nightclub that nods to Welles and Kubrick as casually as Henry hails acquaintances at the end of the bar, it’s the self-congratulation of a master draughtsman whose pride in his work and its apparent effortlessness is entirely earned.

Henry’s date, Karen (Lorraine Bracco), isn’t buying it, but the fact is that Henry is a builder of sorts. What he’s constructed is a reputation that precedes him. As Michael Ballhaus’s camera studies Henry and Karen at their table in between pans to the other patrons and the stage, it’s clear that the bubble around Henry is big enough to live large in.

This extended visual gag on the insular splendor of the VIP lifestyle is a showstopper, but it’s also really just the opening act for the evening’s entertainment: Henny Youngman (perfectly impersonating his middle-aged self at the age of 84), the “king of the one-liners,” who drops a couple of knee-slappers. Stop him if you’ve heard these ones before: a guy can’t stand his wife—so take her, please; a dying guy is told he’ll get a reprieve if he can find a way to pay his doctor on time—“Come see me in another six months.” Youngman disappears with the very next cut, but the movie will keep returning to these jokes, in barely disguised forms, over and over again. Henry and Karen are laughing, but even if they don’t know it yet, the rest of their lives together as a couple will keep providing the punch-lines.

In both its cleverly engineered narrative structure—it appears utterly atomized and yet its lines are as long and clean as a vintage Cadillac—and the bigger picture of its reception and influence, Goodfellas is a classic example of setup and payoff. It’s also just a classic, period. Scorsese’s twelfth and greatest feature, adapted from Wiseguy, a mob-tell all narrated by stoolie Henry Hill to novelist Nicholas Pileggi, casts a long, enveloping shadow over the past twenty-five years’ worth of studio, independent, and television productions from the U.S. and elsewhere. It might be easier to count the keynote movies that don’t borrow from it in some way. For while many of Goodfellas’ best formal tricks hearken back to both its creator’s formative influences (from Edwin S. Porter on down) and his own idiosyncratic innovations (a combination of uncomfortable intimacy and strident distancing devices; pop tunes used as conduits to characters’ inner lives), it’s the uncanny sense of imminence—a character edging to the brink of ruin; a pop-gangster film canon on the edge of forming—that is the movie’s true legacy.

Goodfellas barely seems to have aged, which is not to say that it’s “timeless.” Spanning 1955 to 1980, the film is awash in temporal signifiers, from décor to sneakily esoteric soundtrack cuts (Tarantino was taking notes) and it quite consciously seeks to evoke different eras of American life. The nostalgia is luxurious, but there’s no inertia; nothing holds for very long. Brilliantly edited by Thelma Schoonmaker, Goodfellas is one of the fleetest of all American epics. Its serene velocity not only brings it up to speed in the commercial-aesthetic present tense—which has arguably been largely shaped in its image—but also propels it past the inheritors and imitators who are ultimately too numerous to name-check, from Paul Thomas Anderson (Boogie Nights) to Jay-Z (the “fuck you, pay me” skit from Hard Knock Life, Vol. 2).

Pace is everything in Goodfellas. The film opens with the sounds of cars hurtling down the highway, and the main actors’ credits fly purposefully across the screen against a black background. From there, everything happens much faster than we expect it: no sooner have we been introduced to Henry, Jimmy Conway (Robert De Niro), and Tommy DeVito (Joe Pesci) in a bobbing, highway-hypnotized three-shot than we see the trio opening a car trunk, weapons drawn, to stab and shoot the wounded man inside. A quick push-in on Henry’s face and the opening strains of a Tony Bennett standard drag us back fifteen years in the blink of an eye.

In fact, the first image we see of the young Henry (Christopher Serrone) is of his eye, an indicator that the story is going to be told from his point of view, although Scorsese doesn’t strictly stick to his perspective as things go on. The camera is unbound in Goodfellas, and not only when it comes to celebrated set pieces like Henry and Karen’s nightclub outing. It also zooms and tracks endlessly through the extended scene-setting adolescent overture that is at once Goodfellas’ least obviously iconic and perhaps most phenomenally accomplished section. In setup after setup, the camera moves to meet its subjects head-on, sometimes swiftly, sometimes languorously. Our vision is always being led, whether it’s to see the same things that Henry does—like the imperious detachment of Roman-monikered neighborhood boss Paul Cicero (Paul Sorvino)—or the forces gathering around him. One indelible throwaway: a short pan up from Henry’s face as he strains to see over the steering wheel of the Cadillac he’s being paid to park, catching a gaggle of local girls watching desirously through a chain-link fence.

Much has already been written about the insidious storytelling strategy of Goodfellas, which is to frame Henry’s systematic initiation and indoctrination into the underworld as a seduction—one that gradually wears down our defenses as well. The obvious precedent in Scorsese’s filmography for such tactics is Taxi Driver, with its confessional tone and swirlingly subjective point of view, except that nobody (except maybe John Hinckley Jr.) could have looked at Travis Bickle’s life and wanted a piece of it. Whatever Robert De Niro’s elemental appeal, the character was a case study, not a mirror image (except maybe of Paul Schrader).

But Henry Hill isn’t a crank or (obvious) sociopath; he’s a covetous kid who seems impressed by the gentlemanly ethics, such as they are, of the made guys living on his block. The combination of young Serrone’s clean-scrubbed handsomeness and our general susceptibility to tropes of coming-of-age-movies—a genre that Scorsese exploits ruthlessly while riffing more explicitly on gangster pictures—has the effect of convincing us that this is a character less trapped inside his head than just slightly in over it. The sequence in which Henry beats his first rap and is rewarded for it by a hallway full of glad-handing, backslapping goombahs is brief but exhilarating; after largely isolating his protagonist in the frame in the early scenes, Scorsese shows him literally surrounded by his idols, swallowed up in a sea of humanity topped off with a triumphant freeze frame. It’s a definitive farewell to childhood and yet, when we next see Henry eight years later in the lanky frame of Ray Liotta, it’s clear he’s still living in that frozen moment where consequences are someone else’s problem.

If Goodfellas has an acknowledged flaw, it’s that Henry is an uncommonly passive protagonist. Liotta’s acting may seem similarly feeble when matched against the pyrotechnics of Joe Pesci (who won an Oscar as the volatile Tommy) or Robert De Niro’s slyly frightening stone-face, but he’s actually perfect for the part. It may take Henry the whole movie to realize that he’s a shnook, but the viewer is given plenty of cues to this effect via Liotta’s cleverly conceived performance. As long as the adult Henry believes he’s still living in the safely constrained world of his youth—where every act is an exercise in upward mobility—he carries himself with peacock swagger, but his eyes are dull: he has no foresight and no peripheral vision. And as the film heads into the home stretch, his eyes start deceiving him. When he’s a teenager, Henry’s point-of-view shots have an almost hallucinatory clarity; as a coked-out adult, his perceptions are bloodshot.

The extended scorched-earth set piece in which Henry drives around in an insomniac haze trying to facilitate a drug deal while convinced that the feds are on his tail, forms a kind of slant rhyme with the Copacabana scene: one seamless and smooth, the other jagged and frantic; both suffused with music (the Crystals’ “Then He Kissed Me” for one; a medley of the Who, the Rolling Stones and Muddy Waters in the later) and collectively emblematic of the movie’s rise-and-fall bifurcation. It’s a dramatic dynamic at least as old as Hawks’s Scarface but re-energized through the sheer brio of the presentation (even more so than De Palma’s Scarface, which features a far more exciting protagonist and mutates into a confused piece of antihero-worship by the end).

Thus when Goodfellas is seemingly at its most unhinged, it’s actually paying off—and playing off—things that have been carefully nailed into place early on. The episodic plotting and fitful, vivid grotesqueness of certain images (corpses chilled in a freezer or ground in the gears of a garbage truck) mark the film as a picaresque work, but the connective tissue is there, and it’s solid even if it’s not always visible. Goodfellas’ brazen stylistic flourishes proved irresistible to a generation of filmmakers looking to replicate their effects but rarely, if ever, inside such a precisely measured framework. Goodfellas is a movie of weightless sensations—eroticism, terror, jealousy—grounded by nothing more (or less) than good old-fashioned craftsmanship. Make no mistake: Scorsese and his collaborators are in construction.