Dreams Come True
Alison Willmore on Enlightened (episode: “All I Ever Wanted”) and Chuck & Buck

The era of the quality cable drama has been synchronous with the rise of the television antihero—the Don Drapers, Walter Whites, Tony Sopranos, Nucky Thompsons, and Vic Mackeys, these irresistible, morally compromised protagonists whose stories are marked by everything from addiction and infidelity to graft and murder. But in their wake has come another breed of main character, one more challenging and, perhaps, daring, who may not be a gangster or meth manufacturer but who is even more confrontational than those in terms of personality. Ones like Hannah Horvath in Girls, whose oblivious twentysomething narcissism is as painful to observe as it is recognizable, or Piper Chapman from Orange Is the New Black, whose good intentions are inevitably warped by her blinkered privilege and personal selfishness.

But the queen of these female antiheroes is Amy Jellicoe, whose return to her workplace after an epic, mascara-bleeding meltdown is chronicled in the tremendous HBO series Enlightened. Played by Laura Dern, Amy is exquisitely calibrated to be an irritant, but she’s also impossible to shake off or keep at a distance. Her manic desire to reshape her life into some kind of vehicle for the greater good is expressed through surges of the vague self-help speech she picked up while away in treatment and via dreamy voiceovers that present a self-image clouded with romantic grandeur. "What if somehow you knew how to break the spell and only you could bring the light? What if somehow you had found the key that could unlock the chains?" she murmurs at the start of the show's second and, sadly, final season. She’s talking about bringing down the large, nebulously described conglomerate Abaddon Industries, as a whistle-blower, a goal that, despite her insistence is for a higher cause, has more to do with her proving she's a new person than with the wrongdoings committed.

Amy is the creation of Mike White, and over the two seasons of Enlightened becomes the purest version of a character the writer and director has returned to and refined over his career: the protagonist whose genuine, unadorable awkwardness is portrayed with such steady, nonjudgmental empathy that our desire to recoil is eroded, even as we continue to see and understand that reaction in other people on screen. Echoes of Amy can first be seen back in White's earliest work, 2000's Chuck & Buck, the divisive indie he wrote and Miguel Arteta directed. White starred in that film, as Buck O'Brien, a 27-year-old whose life seems to have been on hold since pubescence. He's fixated on Chuck, now music exec Charlie (Chris Weitz), the childhood friend with whom Buck had his first sexual experiences.

Buck is a man-child whose boyishness and toy collection is played for maximum creepiness. He's often seen with a backpack, as if he's on his way to school, accompanied by music that sounds like the theme song to a children's show that never existed: “Ooodily ooodily ooodily, fun fun fun” goes the cheery chorus from Gwendolyn and the Good Time Gang. White plays Buck with the posture and demeanor of a slouching adolescent, which contrasts with the grown-up desires he's trying to fulfill in a way that's instinctively off-putting. While Charlie's become a standard, fairly successful (and, apparently, straight) adult, Buck's development has been arrested, and the way he tries to win Charlie over by following him home and bombarding him with reminiscences begins to cross the line into stalking. "Remember, we used to play games when we were businessmen—and now you're really doing it. Is it real now, or still like a game?" Buck asks Charlie, resistant to and uncomprehending of how little he has left in common with his former friend.

Told from Charlie's side, Chuck & Buck could be a kind of indie, psychosexually loaded variation on The Cable Guy. It's a panicky thriller about a too-close friendship (with a past involving less-than-hetero experimentation) and a damaged obsessive trying to disrupt someone's more stable life. But the film centers on Buck, and without softening the character a whit it slowly pulls our sympathies in his direction not necessarily by demanding that we relate to him but that we see things from his perspective. When, early in the film, Buck listens over and over to an answering machine message from Charlie containing an ambiguous, sort-of invitation to L.A., then packs up and heads there anyway, it's funny and alarming, an example of someone willfully hearing only what he wants to. By the time Buck calls to invite Charlie to a production of a play he wrote that's his transparent vision of the pair's relationship being disrupted by an evil witch (Charlie's fiancée), something he says he wrote so that Charlie "will remember the way things used to be," we feel practically protective. "Please come," Buck pleads, and we hope he does, just as much as we hope Buck can let go of his fixation.

Like Buck, Amy Jellicoe is an oddball out of step with the rest of the world. She maintains a kind of tone-deaf cheeriness in the face of those who don't agree with her, relate to her, or understand her—a quality that can make her conversations feel like social anxiety nightmares in which everyone gazes quizzically at you as you speak and then makes an excuse to walk away. And like Buck, her goals also have a childish vagueness to them, except rather than wanting a happily-ever-after with someone who ages ago moved on, she longs for a bigger life, and to change the world—though she has no particular idea of how to go about this, and it's irretrievably bound up in her own personal disappointments and desire for reinvention. By the start of Enlightened's second season, Amy's found a purpose—she's going to take down the company she works for, the company that's demoted her to a lowly basement position, the company that turns out to be involved in nefarious dealings, though she's at first more shocked by how mean the executives are about their employees in emails.

Amy's longings for something more are at once ridiculous and achingly poignant—a craving for meaning and fulfillment that, for her, can only be expressed in platitudes. Which may be why the most emotionally devastating episode of the series is the one in which Amy seems to get everything she hoped for—an installment entitled “All I Ever Wanted,” and helmed by no less than Todd Haynes in his first and so far only stint as a guest director on a TV series. In “All I Ever Wanted,” all that Amy desired falls into place. The documents she got from Abbadon turn out to be packed with damning material, and Jeff (Dermot Mulroney), the handsome Los Angeles Times reporter she's been in contact with about the story, gives her the commendation she's been waiting for: "I want you to know that what you did was really good, brave, really important." Then he takes her to bed and spends the weekend with her in a daydream of naïve urban romance—they eat croissants in a café, she thumbs through his copy of Manufacturing Consent, he tells her about how he wants "meaning," he wants "experience," to "make a difference." (In typical White fashion, these conversations are also loaded with warning signs that Amy blithely ignores, like the baldly stated "I'd rather be single, frankly.")

And then, terribly, something else goes right—Levi (Luke Wilson), Amy's ex-husband, comes back from the rehab she talked him into at the end of the first season, clean, sober, emotionally open and saying everything she's always wanted to hear. They sit by the edge of a baseball diamond as the day nears its end, and he tells her, "You're the only one who ever believed in me," that he knows her, that they can try again for a baby. It’s a shattering conversation in which he absorbs all of her criticisms and fears and insists they can do this—“I don't want this same old sad story, I want a new story.” Haynes shoots the suburban late afternoon so beautifully, a completely mood-inappropriate setting for such a raw discussion. (White described the look of the show once as "like you're depressed on the prettiest L.A. day.") It's a golden contrast to the city life she dallied in over the weekend, with its warm clutter—Riverside's all wide streets, low-slung houses, and corporate parks, and it's where Amy's from, where she and Levi grew up.

Later, at home, Amy, who’s been presented with two conflicting possibilities of happiness, has a panic attack. And we in the audience then realize how invested we are in the soap-bubble delicacy of her remade psyche, which is threatened more by having real choices than by the indifference the world normally shows her. The scene of Amy hyperventilating in the bedroom while her sometimes emotionally withholding mother (played by Dern's real life mom, Diane Ladd) embraces her fragile daughter recalls the almost dreamlike sequence at the end of Chuck & Buck in which Charlie gives Buck exactly what he's been chasing after, a sexual act of tenderness that finally frees the latter from his fixation on the past. In both scenes, the characters come around to these exasperating, complex protagonists in the same way we have. They provide them with gestures of understanding and protection that we in the audience cannot—rare moments, in the universes White creates, in which his heroes and heroines aren't alone.

In Enlightened, White's finest and most grown-up work to date, it's a moment that's more resonant and hard-won because of the longer journey it took to get there. The series had often challenged the audience to dismiss Amy, to turn away or turn the channel. There's nothing dreamlike in Amy’s distress—it's terribly real, and having come this far, it's impossible to not feel for her, even though the series hasn't filed down her sharp edges or tucked away her shrill tendencies. Enlightened takes the ideas White started playing with in Chuck & Buck and gives them room to unfold. He makes it clear that in terms of compelling storytelling, putting the onus on a character to offer up ways to be "likable" has nothing on seeing a character in her difficult, complicated, and thrillingly human entirety. 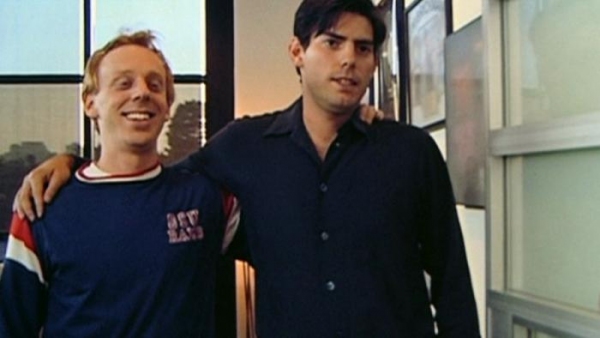