Breathing Lessons:
An Interview with Céline Sciamma
By Eileen G'Sell

Céline Sciamma’s latest feature, Petite Maman, offers the uncommon joy of childhood revelation. Rather than spoil the film’s delightful plot twist, I would rather gently implore you, if at all possible, to see this film before ingesting reviews, criticism, or even this humble interview. The premise of Petite Maman is as simple as the film’s emotional stakes are not: nine-year-old Nelly (Joséphine Sanz) has lost her grandmother, and soon after accompanies her mother Marion (Nina Meurisse) to clean out her antique childhood home. Setting out to find her mother’s beloved tree fort in the nearby woods, Nelly encounters another girl (Gabrielle Sanz) of similar age and mien, sans Nelly’s tomboyish demeanor. Another triumph from the writer-director of Tomboy (2011) and Portrait of a Lady on Fire (2019), Petite Maman is as radiant as it is restrained, as wondrous as it is quietly devastating.

Sciamma and I chatted a few days before Petite Maman’s April 22 release. Though a bit tired from hours of Zooming across a half-dozen time zones, the director roused when it came to discussing the vitality—and complexity—of childhood and the means by which her film honored both. Pulling occasional drags on a cigarette from a dim room, she waxed at once warm and ruminative in her velvet smoking jacket, a jaunty riposte to the typical auteur persona—though, to be certain, if anyone today is artfully building an auteur’s filmography it would have to be her.

Read full review of the film by Susannah Gruder here.

Reverse Shot: Much has been written on the importance of the “female gaze” in making movies, which you’ve spoken up about. Both Tomboy and Petite Maman seem to replace what one might call the “adult gaze” with the “child gaze”—in terms of camera placement, movement, and other cinematographic details. As a filmmaker, how do you create a world that prioritizes a child’s perspective? Is this a different process for you than when filming adults?

Céline Sciamma: The process is different because there’s a quality to the gaze that is always political. It’s not that children have a more poetic look on life, but that it is vital for them to look, it’s vital for them to gaze. It’s about getting information, because they are dependent, and a lot isn’t said within families that have a strong hierarchy. Kids are basically little investigators about life in general, but also their [individual] contexts. Their gaze takes on the intensity of their curiosity.

At the same time, there’s a solitude to their gaze. And their gaze is very accurate [laughs]. It is. That’s why children are great characters for the films that I want to make, which so far have been built on one character gazing, not multiple characters looking at the situation. The fact that the act of looking is part of the tension of the dramaturgy is, for instance, obvious in Portrait of a Lady on Fire, because it’s about making a portrait of someone. It’s about that question of who takes attention. For the kids in Petite Maman there is an intense question, an intense will to understand, and an intense care in the act of looking—that is extraordinary for cinema.

RS: Your films grant children great agency in their ability to look, and there is a dignity given to their grief and suffering, but also given to their joy and play. With Petite Maman, how did you see the sadness of Marion versus her daughter Nelly? How did you approach the poles of joy and sadness?

CS: The film is really about a trio of grief—the circulation of trauma and sadness among the three characters. This film is not only about the relationship between a mother and daughter but also about trying to break the hierarchy of genealogy, and it takes three to do that. Two would just be a shift in power. Within that matriarchal myth, my personal question was, if I met my mother as a kid, would she be my sister? Would we share the same mother? Maybe Nelly’s sadness is the grief of losing her grandmother, but maybe Marion’s sadness is coming from a situation with her mother. All of this is sheltered in the same home—each family has its own culture of melancholy and sadness, and not all of it is addressed.

At the same time, the film also gives the viewer the ability to create new and healing memories—whether it is with ghosts of loved ones or with people who are still alive whom we can’t connect with. It’s trying to be playful with that circulation of grief and melancholy.

RS: Though it may not be as overt as your earlier films, there are ways in which Nelly and Marion play with gendered expectations. Nelly is not especially feminine, and yet plays a nurturing, caregiving role. Unlike Tomboy, Petite Maman is not about subverting gender roles, but within daughterhood and motherhood there are opportunities for deviance.

CS: Yes, Marion and Nelly are role-playing at a certain point in the film—and also pretending to be in love, to be married, and so on. The film is also the story of the presence of different female bodies. Two actual sisters are playing the parts of Nelly and Marion, and we can see how different they are. Even though the film is timeless, we can see how Nelly is more gender-free than her mother. We can also how Nelly’s family is very close, but how each generation is also from a different culture in a way [that concerns gender roles].

RS: Further contributing to the intimacy of the bonds between Nelly and Marion are the ways in which the sound and texture of people and objects sensorily interact onscreen. You’ve talked about prioritizing the image over story, which of course is very evident here, but Petite Maman also seems to privilege sound and a kind of multisensory lushness.

CS: With Petite Maman, the level of intervention in terms of choosing the objects and fabrics had never been higher. Because we shot in a studio, everything was built, and everything had been picked. Object-wise and material-wise, there was a lot of appetite for textures. As we were building this whole world, we paid the same level of attention to every detail. That high level of choice gives deepness to the image.

I am passionate about sound editing and also about Foley. When you shoot in a studio, you have to repeat and record the whole sound later. With this film, we had fun creating the whole universe as a common space and time. That meant that the sounds were really, really ritualized. Whether it is the sound of the objects or someone making something in the kitchen, it would always be the same sound—a ghost sound, in a way. We took on some very artificial effects with the sound, as we wanted the house to feel like a spaceship: a lot of rumble, some notes, and frequencies that make it feel like this all could fly away. And then there’s the sound of bodies breathing, something I’m always obsessed about. A lot of it is re-recorded because kids usually don’t breathe very heavily. Every time that Nelly or Marion would breathe in or breathe out was all done in post-sync with the actors, so that it could be super accurate. Petite Maman could be a ghost film, but it’s not. It’s about presence. It’s about the paradox of finding the physical presence, the smell, the breathing of your grandmother at an age where you didn’t even know her. That’s also why the film doesn’t have a soundtrack or music, so that you have to listen to the sound.

We shot the during the second lockdown of COVID, so we would only see the faces of the actors when we would say “action”; otherwise, everyone was wearing a mask. With the masks, we couldn’t hear the breathing, or smell the smells—all our senses were shut down. It felt very important to look at the characters’ faces to create this whole choreography of human sounds, to feel that person’s presence.

RS: In tandem with sound, silence punctuates a lot of the film, often in a poetic way. Do you plan for these silences when you’re creating the screenplay, or is this something that you choose to do when shooting?

CS: The rhythm, the whole groove, of the film is found in the process of making it. It took ten days—five days outside, five days inside—to design the set. When you design a set, you not only design what you’re going to see, but also the rhythm of your film. The length of the corridor was chosen so that I could do a track shot based on following an eight-year-old who would have to do at least 14 steps. Being always on that same set, the kids find the groove, and together we all built this rhythm. It was the same with the words, the dialogue. For the first few days, I gave the children timing, like, “Count in your head to five before you say that sentence.” But ten days later, I would have no need to say that; they would fully be in the rhythm already. It’s all about me watching what they propose and shooting and editing around it.

Heavily dramaturgical scenes were shot shot/counter-shot, so that we would have the leverage to play with silence. Otherwise, since the film has a lot of long takes, the rhythm—between the silence and the action—has to be found on the set because afterwards you can’t change it. For me that’s not a risk. I really enjoy that path of finding. From day to day, the more and more long takes I shot, the more we came to know the language of the film. 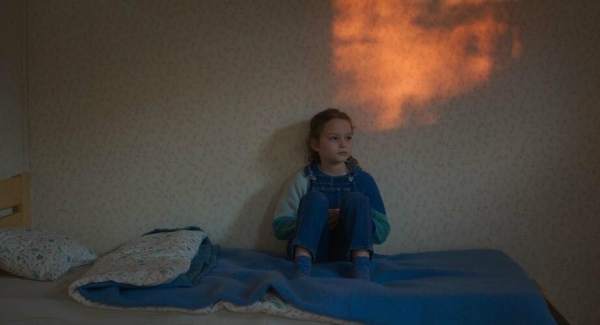