To Each His Own Cinema
Leo Goldsmith on João Bénard da Costa: Others Will Love the Things I Have Loved

João Bénard da Costa: Others Will Love the Things I Have Loved played Saturday, January 9, at Museum of the Moving Image as part of First Look 2016.

With the passing of Manoel de Oliveira at the age of 106 last February, 2015 may prove to be a crucial year in the history of Portuguese cinema. The same year saw the release of two masterpieces of Portuguese cinema in U.S. theaters: Pedro Costa’s Horse Money and Miguel Gomes’s Arabian Nights. Neither, of course, was exactly a box-office smash, but their very existence—along with other recent films by Joaquim Pinto, João Pedro Rodrigues, and others—nonetheless serves as a testament to Portuguese cinema’s persistence. It’s a fortitude worthy of Oliveira’s own tirelessness, following a wave of austerity measures that have crippled their country and their cinema along with it.

This makes Manuel Mozos’s elegiac essay-portrait João Bénard da Costa: Others Will Love the Things I Have Loved unexpectedly timely—it too concerns Portuguese cinema’s uncanny position between life and death, past and future. Its subject is another recently departed figure: the legendary film scholar, programmer, and longtime head of Cinemateca Portuguesa, João Bénard da Costa, who died in 2009. An intimate and deeply nostalgic portrait of someone who was at the center of film culture in Portugal for nearly half a century, Mozos’s film is also poised between mourning and hopefulness, in the uncertain space of a history not yet fully formed.

Born in 1935, Bénard da Costa studied law and philosophy before he began teaching cinema in the 1950s, and thenceforth his biography closely followed the trajectory of Portuguese cinema. Under the pseudonym Duarte de Almeida, he appeared in more than a dozen of Oliveira’s films, but it was as a critic and programmer that he was best known. Having helped to found the magazine O Tempo e o Modo in 1963, he wrote extensively on cinema, publishing monographs on Hitchcock, Buñuel, Lang, Von Sternberg, and Hawks, and several books on Portuguese cinema, including a volume of writings on film from 1990 called Os Filmes da Minha Vida (The Films of My Life), from which Mozos’s film draws extensively. (Bénard da Costa also maintained a blog under this name [http://filmesvida.blogspot.com/] until very late in his life.)

As its subtitle suggests, the film emphasizes Bénard da Costa’s career in bringing his near-devotional cinephilia, his passionate attachment to “the things I have loved,” to a public audience. “I come to lead you through images and memories of mine,” the film’s epigraph reads, and throughout Mozos follows a similar gesture of pivoting between interior and exterior, between his subject’s most intimate obsessions, memories, and desires and the wider world he inhabited and helped to shape. Bénard da Costa’s recollections and musings—read in husky voiceover by his son João Pedro Bénard—are set against images of those places, people, and objects most significant to him. In an explicitly Proustian mode, the film montages family photographs and home movies with Mozos’s own images of Portugal’s fogbound coastlines, the historic town of Sintra, and the almost mythical hills of Arrábida to Lisbon’s south—creating fragmentary spaces of memory in which past and present constantly interrupt one another.

The film’s most significant—and uncanny—spaces, of course, are those that belong to the cinema. These are places both real and virtual: the imaginary cinematic landscapes of treasured films like Carl Dreyer’s Ordet or William Dieterle’s Portrait of Jennie, as well as more material, more public spaces such as the Cinemateca Portuguesa, Cinema São Jorge, and Fundação Calouste Gulbenkian. These are the places most closely associated with Bénard da Costa’s role as the nation’s unofficial ambassador of cinema, and in archival photographs we see him posing at public events with the likes of Lauren Bacall, Catherine Deneuve, and Kirk Douglas—always with a jollity somewhat at odds with the mournful notes of his writings and of Mozos’s film.

This disparity of tones suggests a break with the past: these very real spaces are in their own ways fragile, in danger of receding into memory. Just as the mythic landscapes of classical cinema blur with those of Bénard da Costa’s biography—the oneiric coastlines of Joseph Mankiewicz’s The Ghost and Mrs. Muir merging with those of Portugal—so do the images of Lisbon’s theaters seem to hint at a crumbling cultural infrastructure. The cinema’s ephemeral nature, it would seem, is contagious: Cinemateca Portuguesa itself almost closed in 2013 due to lack of funds; other spaces, like the Teatro Nacional de São Carlos, are clearly the remnants of a lost era. In this sense, the title of one of Bénard da Costa’s books—1996’s O Cinema Português Nunca Existiu—haunts Mozos’s film. “Portuguese cinema has never existed,” or at least its existence has always been delicate, and indeed it may soon cease to exist.

As a central, if lesser known, figure in this cinema, Mozos himself has long been attuned to, even obsessed with, these kinds of fragilities, both physical and cultural. His 2009 essay film Ruínas, whichalso meditates on Portuguese history as represented metonymically through the decaying architecture of its apartment buildings, factories, movie theaters, and churches, has been described by Miguel Gomes as “an essay full of ghosts, about a country that cannot shed its memories.” Mozos’s own filmmaking career has been bound up in the vicissitudes of his country’s cinema. Born in Lisbon in 1959, Mozos is a close contemporary of Pedro Costa, and both studied film at the same time at the Escola Superior de Teatro e Cinema under local cinematic legends such as Paulo Rocha and António Reis. After Mozos graduated in 1984, Fernando Lopes, another pioneer of Portuguese cinema, asked him to make his first film, an hour-long project for television, Um passo, outro passo e depois(1989). His second film—the extraordinary Xavier, which screened in First Look’s second edition in 2013—was mostly shot in 1991 but was put on hold when its producer ran out of money and remained uncompleted for twelve years, finally saved from oblivion when Paulo Rocha himself took on the film’s finishing costs. This tortured production history bleeds into the film’s narrative, and the result is a secret masterpiece of world cinema, bearing a certain tonal resemblance to the works of Philippe Garrel and Arnaud Desplechin, but with an obliquity and melancholy all its own. Since Xavier, Mozos has made a number of films, many of which are essay films and portraits of artists, often concerning the history of Portuguese cinema. The title of one of these—the 1996 essay film Cinema Portuguêse (…)?—hints at the instability that seems to be at the heart of Portuguese cinema in general and Mozos’s in particular. As Miguel Gomes has said, upon curating a retrospective of his collaborator and friend’s work for the Viennale in 2012: “Overall, we are talking about an oeuvre molded by financial distress and thus one that tells us about the compulsion to fail: the failure of the country and of Portuguese cinema, the failure of Mozos’s generation and that of Manuel Mozos the filmmaker.” Gomes, noting the paradox, claims that Mozos’s failure is his “chief contribution to contemporary Portuguese art and culture.”

What Mozos seems to draw, or perhaps inherit, from Bénard da Costa is its own kind of persistence or even obsessiveness—that devotional cinephilia that demands to be shared, transmitted into the world, rather than cherished in secret. Throughout the film we see Mozos sitting in front of a Steenbeck as he scrutinizes Bénard da Costa’s objets du désir—worn prints of Ernst Lubitsch’s The Shop Around the Corner, Vincente Minnelli’s Gigi, and especially Nicholas Ray’s Johnny Guitar. This film in particular, with its baroque style and recursive meditations on the very act of remembering, is the key to Bénard da Costa’s passion for the cinema, one that he seems to continue to return to like a treasured memory, an origin story, a codex. “I can only speak deliriously about Johnny Guitar,” his son’s voiceover reads. “Like every great thing, Johnny Guitar is inexplicable. You tell it—watch it—over and over and over again, like the stories you tell children, and learn that everything in them is right. It is the cinephile’s Imitation of Christ.”

Mozos’s film follows these obsessions with the same wayward attention as Bénard da Costa’s Borgesian prose: elusive and allusive, elegant and melancholy, always in search of a way to explain the inexplicable. In this sense, Mozos seeks out a language to describe cinema’s particular relationship to memory, its status as a space of shared remembrance. “Memories procreate as if they were living people,” Bénard da Costa writes, and there is a sense in these words that cinema itself is an art of memories that reproduce themselves: films proliferate and regenerate in the minds of all who see them. All the more reason to keep them alive, to share their knowledge and passion beyond death. 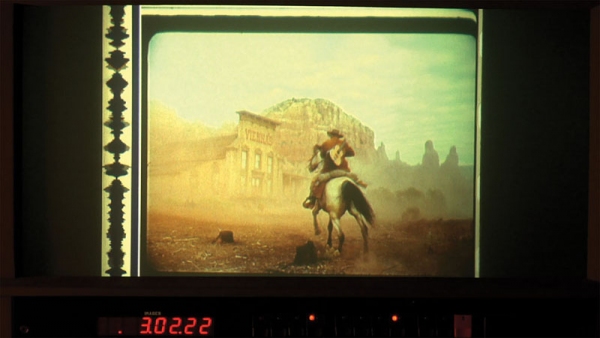